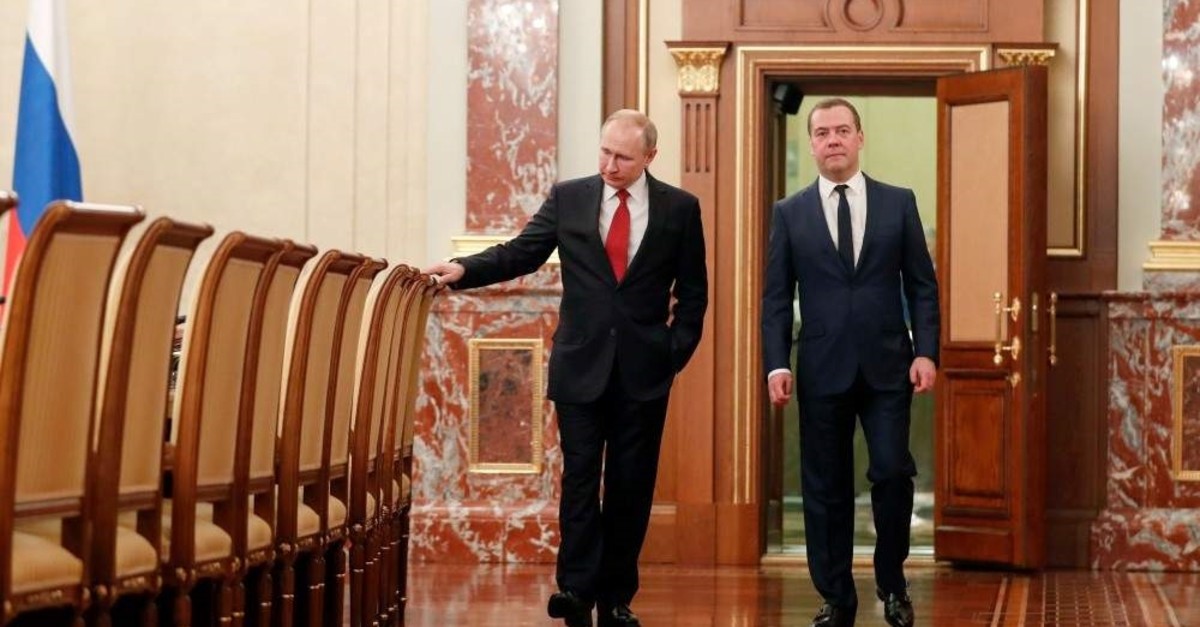 Russian President Vladimir Putin and former Prime Minister Dmitry Medvedev walk before a meeting with members of the government in Moscow, Jan. 15, 2020. (AFP Photo)
by Maria Beat Jan 18, 2020 12:18 am
Russia is in the midst of implementing a whole range of sweeping reforms, the most crucial since Vladimir Putin became the country's president in May 2000. The president launched this demanding and ambitious reform process as part of his annual address to the upper chamber of the Russian parliament, the Federation Council, on Jan. 15, 2020.

Putin is launching these transformative measures after 20 years at the helm of power in Russia in light of what he refers to as a time in which the country "is faced with breakthrough historical tasks." To meet these tasks, he has recommended a number of amendments to the country's constitution to increase the powers of the Russian parliament, diminishing the role of the central government and granting additional authority to the regional governors. Through this, the present super-presidential model of governance will cease functioning to give way to a presidential-parliamentary republic supported by the establishment of a state council with expanded authority. As a result, it is hoped parliamentarian democracy will be broadened for the benefit of the Russian people.

No less significant is the suggestion by President Putin to establish the supremacy of Russia's national law over international law through the amendment of various constitutional clauses in a move deemed to bolster Russia's international position and protect the interests of its citizens and the state in general. The move marks a turnaround for a state that has been traditionally following the principles of international law over its national version in its implementation of foreign policy.

In terms of administration, the address to the Federation Council brought about the immediate resignation of Prime Minister Dmitry Medvedev and his cabinet. His successor, Mikhail Mishustin, who has headed Russia's tax administration for a decade, was swiftly ushered in as head of the Russian government the very next day on Jan. 16. Prime Minister Mishustin is expected to announce his cabinet of ministers in the coming days.

The proposed amendments to the 1993 Russian constitution are pivotal for the country's future. They signal a change of power structure, the most pivotal since 1993, experts say. To approve the package, a nationwide referendum is expected to be held next April, with a working group set up in order to map out the reforms made up of legal experts, representatives of the arts and public figures ranging from renowned musicians to sportsmen, who face the demanding task of compiling a final document that can be presented to the public.

If approved, the amendments will grant the parliament certain powers taken away by the Yeltsin's constitution adopted after the 1993 attempted coup that turned Russia into a super-presidential republic with both chambers of parliament enjoying no more than an advisory role.

While refraining from changing the 1993 Constitution per se, Putin rather aims for its correction, leaving the fundamentals untouched but amending the way executive power is exercised. This is due to make Russia a presidential-parliamentary, or semi-presidential republic, and is expected to increase political activity in the country, some analysts believe, at least formally.

By suggesting to expand the authority of the assembly's lower house, or State Duma, Putin is focused on allowing the chamber to become the final decision maker in matters such as appointing the prime minister. Comparatively, at present, the Duma is able to no more than consent to the presidential nomination of the head of government.

The same amendment will grant the Duma the authority to appoint cabinet members whom the Russian president is currently empowered to nominate unilaterally without consulting the parliament. Putin explicitly stated that: "I suggest changing the procedure and allowing the State Duma to appoint the prime minister of the Russian Federation, and then all deputy prime ministers and federal ministers at the prime minister's recommendation. At the same time, the president will have to appoint them, so he will have no right to turn down the candidates approved by the parliament." Still, however, the president suggested retaining his right to dismiss cabinet members from positions.

Other proposals initiated by the president further contribute to changing the basis of executive power and creating a new political system that breaks with the 2000-2019 period. Of the other proposals, particularly important would be that of "a unified system of public power" that would most probably result in the merging of municipal bodies with expanded authority and thus increased efficiency.

Another no less important proposal revolves around the changed status of the state council. Currently, this serves as a functional consultative assembly without reference in the constitution and was established purely via a presidential decree issued in 2000. The assembly has the potential to become an element of executive power if the relevant provision is incorporated into the constitution and its decisions receive legal validity in the country's various regions.

Although largely focused on the domestic agenda, Putin also made a rather brief though highly insightful reference to the core principals of Russia's foreign policy, suggesting the constitution uphold the supremacy of sovereign law over international law that would alter the foundations of Russia's approach to foreign policy.

Apparently, the mentioned practice established in the U.S. is a focus of attention for the Russian leadership and will shortly receive its practical implementation. If the supremacy of the Russian constitution is enshrined in the final text, experts believe, the immediate result will be the country's ability to refute the rulings of the European Court on Human Rights (ECtHR).

Russia, like its predecessor the Soviet Union, has always strictly followed the provisions of the Vienna Convention. However, if this change is implemented, the approach taken by the country with regard to foreign policy is likely to alter.

Moscow-born Mishustin, 53, is married with three children and is a high-ranking technocrat who virtually built Russia's tax administration from scratch to become internationally recognized today as one of the world's best-performing models. Apparently, he was chosen for the position based on his professional qualifications and excellent record of service. Mishustin is a fairly cut-and-dry political personality who enjoys a good rapport with colleagues and is highly appreciated by Russia's ruling elite. Putin mentioned in his Jan. 15 address the "need for the more dynamic managers" in order to realize suggested modifications and create a model of a "more efficient and caring state power."

Mikhail Mishustin's cabinet is expected to be announced shortly and its composition may well remain without much of a change. The newly appointed prime minister faces the uphill task of regaining the respect and trust of the Russian business sector by improving the general business climate, removing administrative barriers and reforming the system of supervision and control over its activity.

Russian business has had relatively positive reactions to Prime Minister Mishustin's nomination and hardly expects any dramatic changes, however, at least as of now.