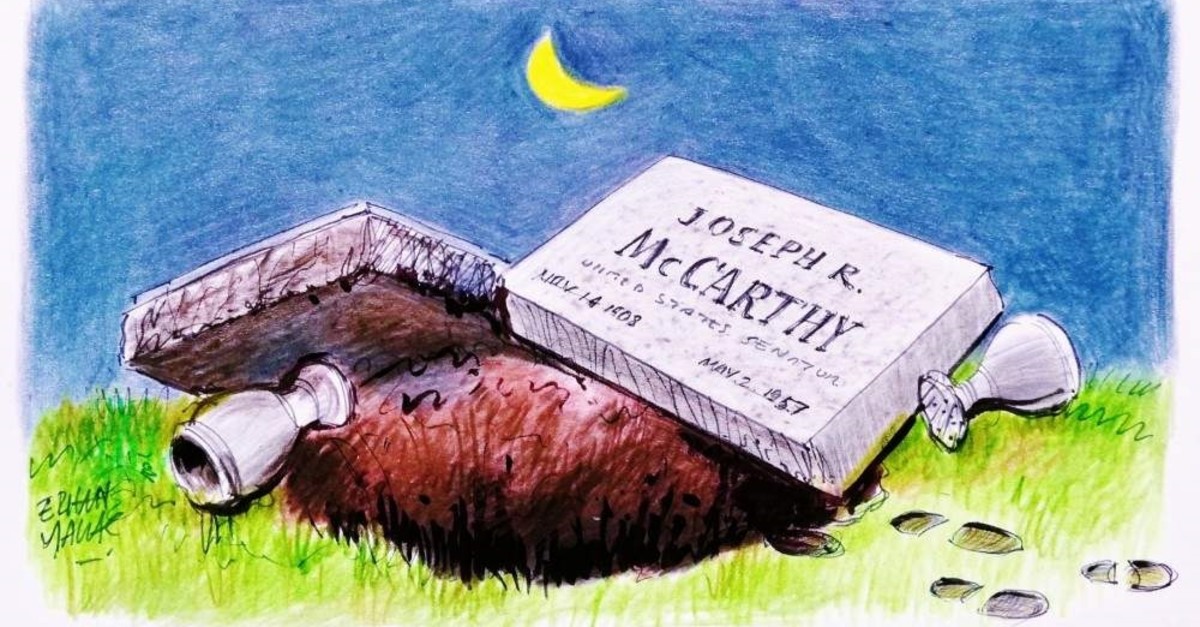 McCarthyism was described in the American political lexicon as the practice of publicly accusing American government employees of political disloyalty (Communism) and subversive activities. Hence, the Congress enacted the McCarran Act, also known as the Subversive Activities Control Act of 1950, to counter communism among members of the Communist Party of the U.S. and government employees who were loyal to a foreign power and secretly infiltrated American cultural and political institutions.

But a few years later this investigation gained notoriety for making baseless accusations against Americans with little regard for evidence and using unfair investigation methods while ignoring civil rights and liberties.

During this investigation, many government employees' careers were ended simply because they were accused of having communist sympathies. Moreover, under the McCarthyism investigation, many lives and reputations of Americans were ruined or blacklisted without credible evidence of any wrongdoing.

According to some historians, between 1947 and 1965, 5 million government employees were investigated, of which about 2,700 people were forced to leave their jobs and 12,000 people resigned.

Actually, this investigation violated the freedom of speech provided for in the First Amendment, one of the founding principles of the U.S. Constitution. The unfavorable McCarthyism investigation was very un-American, and it was dangerous to America.

In 1954, the McCarthy hearings were televised. When Sen. McCarthy accused an army officer of being a communist (the so-called Army-McCarthy hearings), it gave rise to backlash against McCarthyism.

Finally, the U.S. Supreme Court put an end to McCarthyism in 1957 to stop the irrational investigation. Today, McCarthyism is used as a term to indicate when the government violates due process by ignoring the civil rights of citizens. Overall, McCarthyism's biggest effect was that it created an anti-democratic atmosphere.

A modern version of the 'hunt'

Francis Fukuyama's article "The End of History" argued that the collapse of the Soviet Union and communism is imminent. Fukuyama acknowledged the victory of both politics and economy heading in the direction of a liberal order with the West and Western ideas.

After the collapse of the Soviet Union in 1991, the bipolar international system changed and left the U.S. an unchallenged power. The U.S. has changed its Cold War foreign policy strategy to emerge as a unipolar superpower of the world.

At the beginning of the 21st century, with the emergence of a multipolar system and globalization, U.S. foreign policy transitioned from the Old World order to a new one. The 21st century began with a new history for the U.S with the Sept. 11, 2001, terrorist attack.

After the collapse of the Soviet Union, the U.S. found a new enemy and launched a "war on terror." Many scholars described the Sept. 11 terrorist attacks as the initiation of a "new era" or "new world order" in international relations. The American military response to Sept. 11 was an unprecedented way of devising foreign policy strategy to kill terrorist Osama bin Laden.

It was clear that the U.S was justifying its unrivaled military operations on the pretext of a war on terror for the world leadership. In this regard, the invasion of Kuwait by then-Iraqi President Saddam Hussein was another opportunity to attack the Iraqi leader.

President George W. Bush, in the State of the Union address in 2002, made clear when he said to the world that "either you are with America or you are with the terrorists." Since then, the U.S. has expanded the war on terror regardless of who the president is.

In this regard, the term "witch hunt" was revitalized after Sept. 11 for the threat of terror in international affairs. The American government often targets Muslims, trying to catch or kill "terrorists" across the globe through military operations.

So, is the U.S.'s Terrorist Watch List a modern version of a witch hunt? The threat of terror has taken specific forms, particularly Islamic countries or groups. For example, the American government defined Iran, Iraq and Libya as "rogue states" to give the perception that those governments sponsor terrorism.

American presidents have expanded the targeting of states suspected of harboring terrorists to include "potential terrorist hotspots." The U.S. can justify its military attack on any sovereign country by using the threat of terror. American presidents' rhetoric culturally stereotypes non-Westerners as "others," particularly in the Muslim world, although Muslims have rejected all kinds of terrorism.

After World War II, anti-communism became hysterical until 1991, and from 2001 to present, the "war on terror" has become hysterical in international relations.

A modern terrorism witch hunt began with the terrorist attacks on Sept. 11. This event has completely changed the world order vis-a-vis international relations.

Bush defined the Sept.11 attacks as "a new war," and this was the paradigm shift for the new world order in the 21st century.

The new paradigm is a war on terrorism on global scale since 2001, which is the top priority for national security. The Bush administration categorized the countries based on their involvement in the proliferation of weapons of mass destruction (WMD).

In this regard, the U.S. labeled North Korea, Iran and Iraq as the "axis of evil." Any country that was linked to the spread of WMD, ballistic missiles and development of nuclear weapons was also viewed as part of the "axis of evil." As a result, they were also considered supporters of terrorism.

In the long term, the implication of the war on terrorism has been building a new U.S.-led world order. That effort led the U.S. to adopt the role of "world policeman."

Since the Sept. 11 attacks, the U.S. has been expanding its military operations on the pretext of global terrorism around the world (North Korea, Afghanistan, Iran, the Middle East and Africa, etc.) This is the U.S.'s renewed version of "witch hunts for terrorism" in international relations.

The last example of a terrorism witch hunt was the U.S. killing of Iranian commander Qasem Soleimani in a drone strike in Baghdad. President Donald Trump said that "he was a monster."