Ties binding Turkey and Russia more diverse than ever 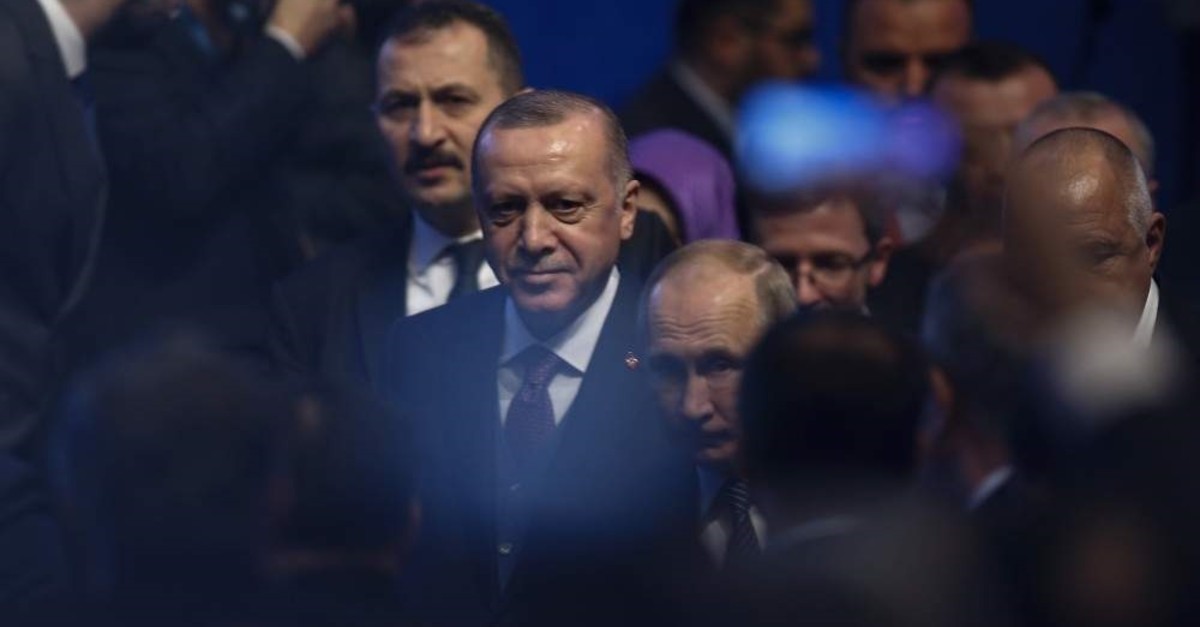 President Recep Tayyip Erdo?an and Russia's President Vladimir Putin arrive for a ceremony in Istanbul for the inauguration of the TurkStream pipeline, Jan. 8, 2020. (AP Photo)
by Ivan Starodubtsev Jan 28, 2020 12:30 am

Energy was once what regulated Ankara-Moscow relations. Today, however, an array of areas from regional issues to trade have become milestones for diversification of friendship on both sides

On Jan. 8, Russian President Vladimir Putin made a working visit to Istanbul. Formally, the center of the visit was the participation of the Russian and Turkish presidents at the opening ceremony of the Turkish Stream pipeline. But in practice, Putin and Recep Tayyip Erdoğan launched Russian-Turkish relations, not only in the energy sector but in general.

The two leaders have opened a new page in bilateral cooperation that will have an impact on the state of affairs in the region. In order to better understand the significance of the Istanbul meeting, let us briefly turn to the milestones of Russian-Turkish dialogue in the 21st century.

Assuming a conditional division into decades, let us note that the main result of the first decade of the 21st century in Russian-Turkish relations was the scrapping of patterns and stereotypes.

Erdoğan visited Moscow for the first time immediately after the victory of the Justice and Development Party (AK Party) in the general parliamentary elections in Turkey on Dec. 23-24, 2002. President Putin also visited Ankara on Dec. 5-6, 2004. This was the first official visit by a leader of Russia (as the successor of the USSR) in more than three decades.

It was then that the leaders of the two states indicated their desire and political will to overcome the existence of years of negative stereotypes regarding each other and the restraining burden of historical memory of the numerous Russian-Turkish wars. Naturally, the practical implementation of this decision faced both internal opposition in Russia and Turkey, as well as external pressure from the West, which categorically did not like the formation of the Russian-Turkish North-South axis.

What can be considered the main result of the period until 2010 in Russian-Turkish relations?

Perhaps we should consider Putin's visit to Turkey in August 2009, which was rightly called "historical" by the number and nature of the documents signed. The documents listed below were signed by Putin and Erdoğan:

Thus, it can be stated that the first decade of the 21st century in the relations between Russia and Turkey was devoted to energy. It was then that the undersigned put into circulation the expression, which subsequently became widespread in the Russian expert community, "Russian-Turkish multifaceted energy cooperation."

The second decade for Russian-Turkish relations was full of strength tests. In this sense, we should recall the so-called "airplane crisis" of 2015-2016 and the murder of Russian Ambassador Andrei Karlov in Ankara at the end of 2016.

Separately, it is worth mentioning the attempted military coup in Turkey on the night of July 15-16, 2016, when Russia, unlike many other Turkish foreign partners, primarily in the West, took a clear position on the side of the country's legitimate government.

If we talk about Russian-Turkish cooperation in the second decade, then its main milestone at that time was the conclusion of a deal to supply Turkey with Russian S-400 air defense systems, which also implies, Russia's transfer of technology to the Turkish side. This agreement was signed in December 2017 and by now its implementation is close to completion.

The fact that Turkey has proclaimed a course to diversify sources of arms and ammunition purchases, as well as to create a more independent national defense industry from abroad, has opened up great opportunities for Russia and Turkey. And the S-400 deal is an important but still the first, example of Russian-Turkish cooperation in the defense industry. It may be followed by joint projects in the field of rocket science, shipbuilding, aviation and space, etc.

Completely analogous to energy, we can talk about the possibility of the parties developing "multifaceted Russian-Turkish cooperation in the defense industry." So, how will Russia and Turkey begin the third decade of the 21st century, and what new pages can the parties open besides energy and defense?

The modern world is no longer unipolar. The U.S. is losing the role of world hegemon, and many alternative centers of power and decision-making, both global and regional, are appearing in the world. The meaning of alliances and alliances in the classical sense of the word is eroded. A vivid example of this is Turkey's current participation in NATO. Turkey today is no longer walking in the wake of NATO but is proposing its own agenda to the bloc. Moreover, the country speaks of the need to diversify its military-political alliances and refuses to recognize its belonging to only one bloc and center of power.

The role of regional players and some platforms, which are formed to solve specific regional conflicts and problems, is increasing. The most striking and successful example is the Astana format, created in January 2017 between Russia, Turkey and Iran.

At the moment, the Syrian conflict has not yet been resolved, and the civil war is not over. However, the Astana format gave an impetus to the process of a political settlement in Syria. It is only a matter of time before the constitutional committee, formed with the assistance of Russia, Turkey and Iran, will draft a basic law of Syria and general elections will be held in the country.

Of course, as both Russia and Turkey indicate, the U.S. presence in Syria and their support for the PYD remain the main threat to the political process and the territorial integrity of Syria.

However, let us repeat, the Astana process is a unique example of how the most influential in the regional – Russia, Turkey and Iran – despite the contradictions between them, came together to resolve a complex and complicated conflict.

The example turned out to be so successful that on Sept. 16, 2019, at the meeting of the Astana three in Ankara, the thesis was voiced about the need to replicate the Syrian experience in other regional conflicts.

This thesis was voiced in relation to Yemen; however, as we see, in practice the Russian-Turkish axis demonstrates its effectiveness in the Libyan conflict amid growing tension in the Eastern Mediterranean.

The call made after the meeting on Jan. 8, between Putin and Erdoğan, as well as the diplomatic efforts undertaken by the two leaders (contacts with Germany, France, Italy, Egypt, Saudi Arabia, the United Arab Emirates, Qatar, etc.), led the Government of National Accord (GNA) and Gen. Khalifa Haftar's forces to agree to declare a cease-fire on Jan. 12.

On Jan. 13 in Moscow, with the leading role of Russia and Turkey, negotiations were held between the warring parties of the Libyan conflict. Despite the fact that Khalifa Haftar left Moscow without signing a cease-fire, the fact of such negotiations should already be considered a success. And symbolically there was no success at the Berlin conference on Jan. 19, 2020, which once again showed that wide international formats are not workable for regional conflicts, hence requiring a kind of "Astana 2.0" for Libya.

We may assume that in the axis of the Libyan settlement, as in the case of Syria and the Astana process, there will be two countries – Russia and Turkey. And this cannot but suggest that it is necessary to create a single permanent platform or a permanent mechanism between the two countries, military-political in nature, to resolve regional conflicts, tensions and problems in the Balkans, North Africa, the Caucasus, the Middle East and Central Asia.

The third decade of the 21st century should be marked by the deepening and institutionalization of military-political cooperation between Russia and Turkey. That is, it should be crowned with the signing of an appropriate document formalizing relations between the two countries in this area.

As it was done in the field of economics, energy and defense industry as part of moving away from template thinking and diversification as well as economic partners, energy sources and markets, suppliers and arms and ammunition markets. It is "diversification" and "institutionalization" that should become the keywords for Russian-Turkish relations in the third decade of this century.