Italy's Salvini and discussions of Islamophobia 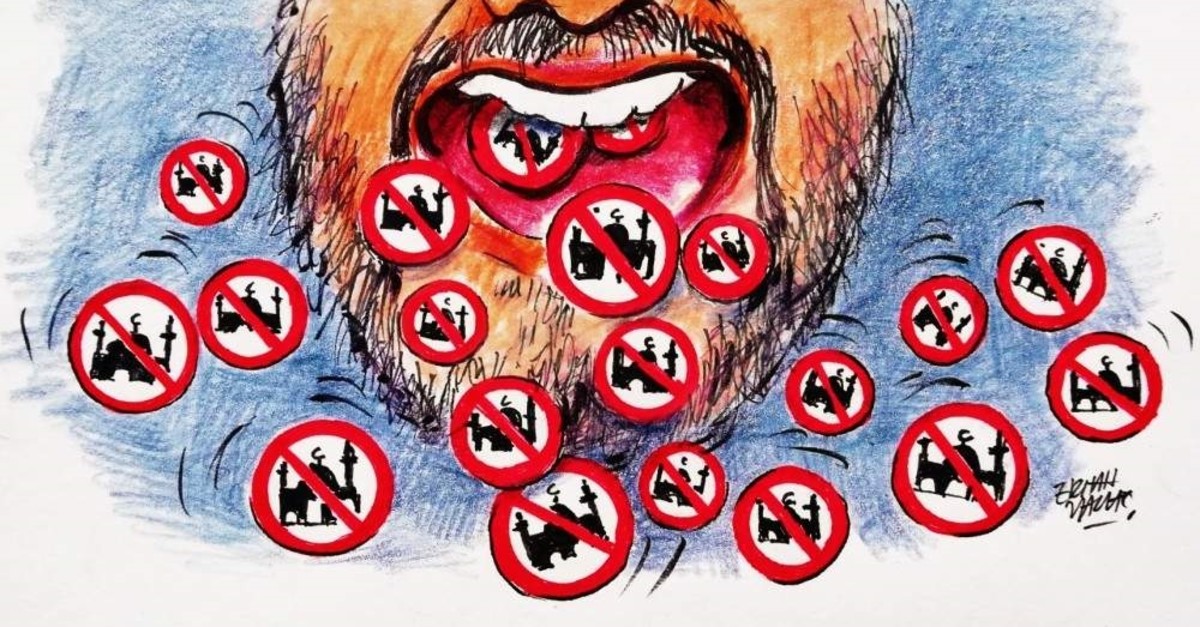 In an interview with the Israeli newspaper Ha-Yom, former Italian Secretary of State and Northern League secretary Matteo Salvini issued some extremely revealing statements about his plans for the future. He promised to recognize Jerusalem as the capital of Israel and to ban the Boycott, Divest and Sanctions (BDS) movement if he becomes prime minister; he also attributed the root of anti-Semitism in Italy to Muslims.

Salvini hopes the current Italian government will not last long and, according to some, he is looking for international legitimacy before his possible ascent to Palazzo Chigi. He does so by looking toward both Washington and Tel Aviv. The Israel Ha-Yom interview responds to this need, speaking directly to Israeli interests.

Recently, Italy has been immersed in a heated debate on the issue of hate propaganda, which has politically opposed Salvini, Giorgia Meloni and various minor right-wing formations of the Democratic Party and the Sardine movement. This rather fictitious opposition, along with a whirlwind of honorary citizenships conferred – but refused – to senator Liliana Segre, led to the institution of an extraordinary House commission against intolerance, racism, anti-Semitism and instigation to hatred and violence.

Both Salvini and Meloni opposed the commission and immediately took the opportunity to identify Islam and Muslims as the only real threats and promoters of anti-Semitism in Italy.

The last episode of the saga was the conference organized by the League in Rome on "new forms of anti-Semitism." Speakers were both the representatives of the Italian Jewish community and Sen. Liliana Segre, who had been invited by Salvini.

Salvini has partially abandoned his anti-system role, proposing Mario Draghi, the former governor of the European Central Bank (ECB), as temporary prime minister. He understood that anti-Semitism is a rock on which his aspirations balance. To bypass it, he turned his gaze abroad, more precisely toward Israel. This is a scheme already adopted by U.S. President Donald Trump, the leader disliked by most American Jews but much loved in Tel Aviv.

Salvini reiterated he has no connection with far-right movements like Casapound and Forza Nuova; however, he seems to forget that Casapound has made a strong ideological contribution to the recent political evolution of his party. Furthermore, the two parties have jointly organized numerous demonstrations.

The League also has exponents of far-right movements in its ranks. For example, Loyalty and Action, which is considered the political acronym behind which the Hammerskin operates in Milan, or an international anti-Semitic formation born from a rib of the Ku Klux Klan.

Luca Traini, the extremist who in February 2018 opened fire on a group of African immigrants in Macerata, expressed the same sympathies. In 2017, Traini ran with the Northern League for a seat in the local government.

In addition to official relations with xenophobic and anti-Semitic far-right forces, part of the League's base undoubtedly nurtures xenophobia, hostility toward Islam and a confused anti-Semitism feeling. Jewish Italian journalist Gad Lerner knows something about this. Last fall, he went to the yearly League convention in Pontida and was insulted and called a "Jew" by some League's militants.

What do Muslims have to do?

The recent conference on "new forms of anti-Semitism" organized by Salvini's party was not attended by representatives of the Italian Jewish community but, among others, by the ambassador of Israel in Rome and Ramy Aziz, an Egyptian Coptic researcher very close to Zionist circles. Aziz is known as a bitter enemy of Islamic-inspired political movements, such as the Muslim Brotherhood. He specialized precisely in demonstrating how Muslims are a threat to Jews. Here is a perfect link between anti-Semitism and Islamophobia.

The European right-wing's conceptual operation is very clear: Since they are intrinsically linked with xenophobia and Islamophobia, which for them represent an unparalleled source of electoral consensus, they need to make a distinction that recognizes a certain type of discrimination as legitimate and others unacceptable. Anti-Jewish hatred is as unacceptable as it is politically inconvenient, while anti-Islamic hatred remains a cornerstone of its propaganda. To close the circle, what's better than to blame the hated Muslims for the hostility toward Jews?

Salvini most likely could not have taken this step without the complicity of Italian Jewish communities, which have never condemned Islamophobia in the face of the gravity of certain statements. Segre's silence is embarrassing considering that she fought for the establishment of an anti-hate commission. On the other hand, we do not remember her condemning Islamophobia.

In a country that lived through racial laws and sent Jews to concentration camps, you have to be brazen to say that anti-Jewish hatred is due to Muslims. Italian Muslims come from such countries as Morocco, where Jews took refuge to escape European persecution.

Even reports by anti-Semitism observers state there have been no incidences of violence or threats by Muslims against Italian Jews; however, the opposite is true, as we have seen from those surrounding Salvini.

The equation between the antis

The pro-Zionist lobby and its allies in the West elaborated the equation between anti-Zionism and anti-Semitism. They assert that any opposition to the political ideology that led to the expropriation of Palestine and the expulsion of its inhabitants is equivalent to an attack on the Jews tout court.

Today, this assumption has evolved into the concept that only anti-Semitism is anti-Zionism. For this reason, Zionists attacked Labour leader Jeremy Corbyn and accused him of anti-Semitism. In his last interview, Salvini supported these attacks.

This comparison is inadmissible, as 127 Jewish academics wrote in an appeal to French representatives. They claim that many Jews, including the ones who died in concentration camps, are anti-Zionists and that there are also anti-Semitic Zionists. They also argue that opposition to Zionism is a legitimate political position in Israel and that a fortiori should be recognized as legitimate for Palestinians suffering from occupation, violence and injustice.

The League's leader has been blinded by the light on the road to Damascus. Recently, he has begun to harangue the crowds, holding the gospel in his hand and kissing the crucifix in the Italian Parliament. He was photographed with the rosary in hand and, between a lap dancer and a mojito, he commended himself to the "Immaculate Heart of Mary." However, he never stopped attacking Pope Francis head-on on immigration and went so far as to mock the Pope on Tik Tok.

Given the circumstances, it is not strange that the Catholic Salvini does not care much about the status of Jerusalem, a holy city for Christians, or about the Palestinian Christians suffering in the Israeli occupation and the destruction of their communities.

According to Salvini, Christianity has more in common with American evangelical churches that carry the flag of Zionism than with the sensitivity of Catholics. With their messianism, American evangelicals constitute a strong electoral base for Trump. They vehemently asked for the recognition of Jerusalem as the capital of Israel. Salvini, and with him a good part of the European far-right, finds himself perfectly at ease in this new faithless religiosity, an eminently identitarian and functional creed for foreign political interests.

On the other hand, Netanyahu himself does not hesitate to establish alliances with forces ambiguous toward Jews and Judaism. The only thing that matters is their loyalty to Israel and its occupation policy. It is the case of Hungarian Prime Minister Viktor Orban and the Israeli support for Ukrainian neo-Nazi forces.

Netanyahu would probably be able to ally with Hitler himself – long ago, he said that the fuhrer did not want to exterminate the Jews.

Salvini wants to be prime minister, but he does not have a clear international stand yet; although a strong pro-Atlantic and pro-Israeli position is now emerging.

Before being secretary of state, Salvini expressed strong comradery with Russian President Vladimir Putin and Russia. He went to Moscow looking for a selfie with the Russian president. Then, he found himself embroiled in an alleged scandal of international corruption the Italian judiciary is still trying to shed light on. A man from his entourage, Gianluca Savini, allegedly obtained financing from Russia by purchasing and selling hydrocarbons.

However, when a U.S. drone killed Iranian Gen. Qassem Soleimani at the beginning of the year, despite the European chanceries' concern, Salvini did not hesitate to tweet his support for the U.S. president with a photo collage of him with Trump, U.S. Secretary of State Mike Pompeo and Israeli Prime Minister Benjamin Netanyahu: "Women and free men, in the face of the silence of the fearful of Italy and the European Union, must thank Trump and the American democracy for eliminating one of the most dangerous and ruthless men in the world, an Islamic terrorist, an enemy of the West, of Israel, of rights and freedoms."

This extreme stance, as well as his attacks on Venezuelan President Maduro, were probably not appreciated in Moscow.

During a visit to Israel in 2018, Salvini called Hezbollah a terrorist organization, provoking harsh criticism in Italian military circles, which reminded him of the presence in Lebanon of an Italian contingent in the context of the United Nations Interim Force in Lebanon (UNIFIL) mission. On that occasion, Salvini had the opportunity to declare his love for Netanyahu and to affix the poster of the Israeli premier on the wall of his bedroom next to that of Donald Trump and to the now faded one of Vladimir Putin.