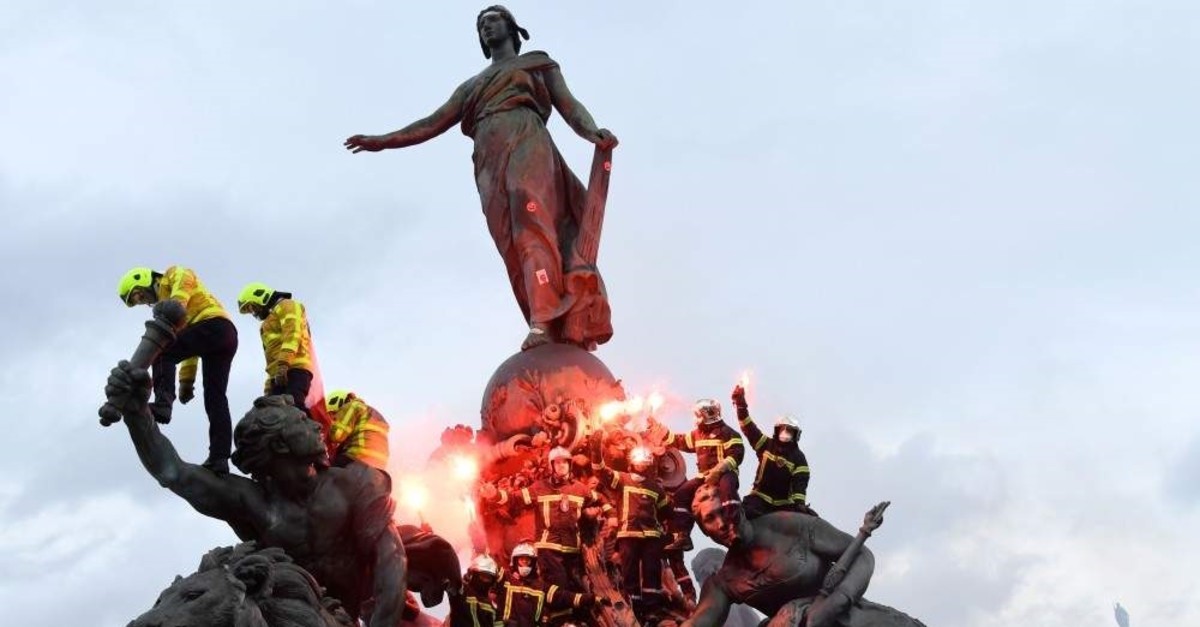 Firefighters brandish flares as they climb on the Statue of Republic Triumph at Nation Square during a demonstration to protest against French government's plan to overhaul the country's retirement system in Paris, Jan. 28, 2020. (AFP Photo)
by Ahmet Akyıldız Jan 31, 2020 2:14 am

The clash of firefighters with police has led many to turn their attention to France, where authorities have been unable to control such street incidents. The yellow vest movement, "mouvement des gilets jaunes," took to the streets on Nov. 17, 2018, to protest rising fuel prices, the cost of living and the disproportionate burden of the government's tax reforms falling on the working and middle classes. Angry protesters soon turned France into hell after disproportionate use of force by the police and the media's indifference to the incidents, which was followed by demonstrations in Belgium and the Netherlands, resulting in millions of euros of loss.

While the tone of language used by mainstream media outlets regarding protesters was a matter of lasting debate, the degree of censorship was questioned at a global level. The fact that media outlets, which livestreamed reactions in East Asia, Russia and the Middle East, which were half the scale of the reaction of the yellow vests, did not highlight the issue, drew the attention of the French people and led the incidents to spread to remote areas. Lastly, the firefighters who came to Paris from various cities in response to poor living standards and conditions, marched from Republique Square to Nation Square.

The protesters chanted slogans claiming that President Emmanuel Macron was still serving colonialism and clashed with police for hours. While CGT and UNSA firefighter members got injured during clashes, the police's use of LBD40 rubber bullets against firefighters was another concerning development in a democratically organized march. Police especially tried to make sure that no recordings were made during the incident, as firefighters tried to help journalists knocked out by police.

French Economy Minister Bruno Le Maire claimed in a recent interview with CNews that the protests were limited to a specific area and that the protests were ill-intended. He continued by saying that the strikes launched in response to the pension reforms that have been going on for 41 days are not damaging the country's economy, a challenging perspective considering the fact that the incidents caused around 1 billion euros in damages. It is evident that the French politicians' attempts to bury their heads in the sand in interviews further provoke the French people.

According to the latest polls, 75% of the French people think the reforms need to be changed or canceled. The use of such tone by politicians is proof that Macron will lose a significant amount of votes in the elections. The reaction of the two-thirds of the voters against economic, social security and pension reforms by French President Macron who's been in power for 2.5 years, is seen almost on all local newspapers.

Everybody needs to be concerned in an environment where the stores on Champs-Élysées Avenue frequented by tourists are closed, the tables in restaurants and cafes are empty, 770 ATMs are looted, and local shops suffered 50 to 60% in losses in the past year. The European Parliament's silence on Anadolu Agency reporters Mustafa Yalçın and Dursun Aydemir being injured by the police in France, highlighting a lack of of press freedom, was another tragedy.