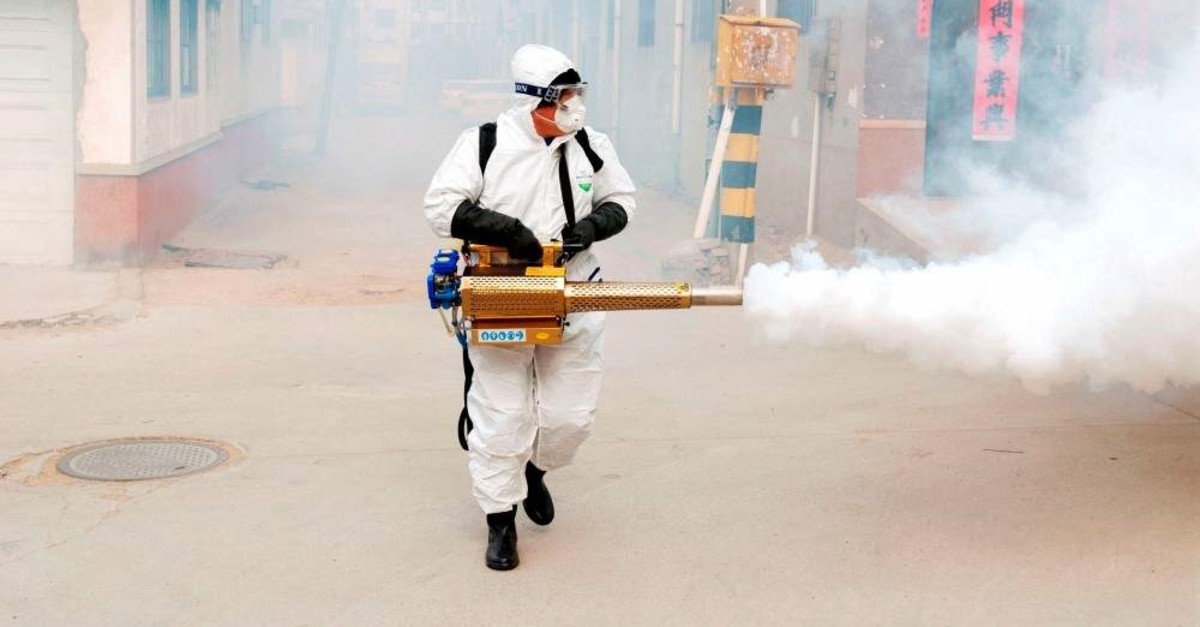 A worker in protective suit disinfects the Dongxinzhuang village, as the country is hit by the new coronavirus, in Qingdao, Shandong province, China, Jan. 29, 2020. (REUTERS Photo)
by Ali Çınar Feb 05, 2020 1:17 am

The coronavirus outbreak has already affected more than 20,000 people and caused 427 deaths since the first reports of its discovery in China’s Wuhan at the end of December. While there have been no cases of coronavirus in Turkey so far, the virus has already spread to 25 countries, including Thailand, Singapore, Japan and Australia. At least 11 people have been infected in the U.S.

Turkey was one of the countries that quickly reacted to the virus threat. It swiftly took measures, including checking passengers with thermal cameras at airports, the Ministry of Health said.
According to a ministry statement Friday, none of the 11,000 people who had traveled from China since the beginning of the outbreak were infected. Additional updates were shared by the Presidency's Directorate of Communications. The country is also closely monitoring the wellbeing of the Turkish citizens who were recently evacuated from Wuhan on a special Turkish military flight. Necessary precautions, including quarantine, have been taken after their arrival.
Meanwhile, Turkish Airlines has suspended flights to China's Beijing, Guangzhou, Shanghai and Xian until the end of February. The Health Ministry said all flights from China to Turkey will be suspended until the end of the month. Other airline companies around the globe have also announced that they would limit flights to China. Overall, more than 10,000 flights to China have been canceled.

In the U.S., the virus was declared a public health emergency by the Trump administration and it was announced that the foreigners traveling from the Hebei province of China would be subject to 14 days of quarantine.

The global increase in the number of reported cases has started to cause panic. While news reports accuse the Chinese authorities of hiding the actual number of cases, many countries have declared their eagerness to cooperate with China in order to prevent the virus from spreading even further. The scientists from France’s Institut Pasteur announced that a vaccine could be made available after 20 months.

So, how much will this virus cost the world, economically speaking?

The estimations of a possible global coronavirus outbreak – with 26 countries already affected – go as high as $500 billion. Recalling the SARS outbreak of 2003, research conducted to find a cure to that epidemic cost the global economy $40 billion.

Any serious blow to the Chinese economy could harm the global economy severely. Suspended flights, the panic over global stock markets – as the Dow Jones plunged 600 points Friday – and major American companies' decisions not to send their employees to China and to limit their operations in the country could well be among the indicators of such an economic blow. For these companies, their manufacturing centers in China and other Southeast Asian countries recently became more indispensable. Prior to the outbreak, President Donald Trump took the initiative to negotiate a trade deal with China to reduce the effects of alleged U.S. dependency.

We should also note the following: automotive giants Toyota and Ford have suspended their Chinese operations until Feb. 9, 2,000 Starbucks stores are temporarily closed, agriculture company Cargill ordered its employees in China to remain indoors and the 42 Apple stores throughout China are also temporarily closed.

Furthermore, let’s not forget the tourism industry, which will soon be severely affected by all these. Last year, 163 million Chinese people went abroad and spent $277 billion. For instance, Australia hosted 9.4 million tourists last year, including 7.96 million Chinese tourists who spent nearly $21.95 billion! On the other hand, the number of foreign visitors to China last year reached 141 million.

U.S. Federal Reserve chair Jerome Powell said: “If the Chinese economy slows down, we will feel that, albeit not as much as Western European countries which trade actively with China or nearby countries." His comments suggested that the global economy will be affected in a totally unexpected way.

The coronavirus in China is posing, in every respect, a more serious threat than the 2003 SARS outbreak. I hope that all countries and the World Health Organization (WHO) in particular will assist China in this matter so that a vaccine for this global threat can be discovered soon.