On alliances in the world today 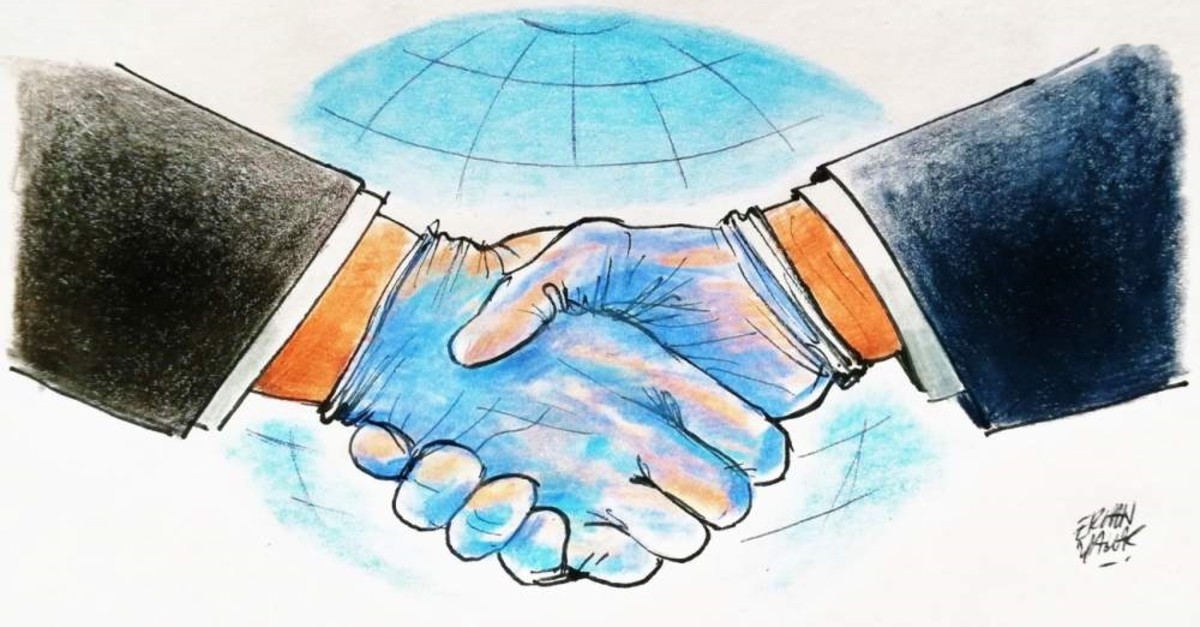 Soft-balancing arrangements are what will shape the nature of international alliances, as hope for coexistence between countries increasingly fades

The bolstering of alliances is one of various tasks upon which foreign policymakers rely. In today's globalized and interconnected world, standing alone is far from a virtue. However, the distinction between alliances, namely collective defense organizations and other cooperative arrangements that states establish should be spelled out clearly.

There exist variants of multilateral cooperative initiatives among states, yet alliances are in a category of their own. What makes an alliance unique is that it constitutes a mutual commitment by each party to guarantee the others' security, survival and territorial integrity and forms a promise to come to the others' aid in the event of an external attack.

What distinguishes an alliance from any other cooperative agreement is how much it signifies a deeper sense of cohesion between members. This cohesion and feeling of unity could be founded on the basis of a common identity and values or common strategic security interests. Indeed, the sense of cohesion and harmony is at its highest if alliance members unite around a common identity, common security interests or common threat perceptions.

The best example in this regard would be NATO, the collective defense organization which came into existence in the immediate aftermath of World War II. Members of NATO not only shared common security interests in the face of the existential threat posed by the communist Soviet Union but also embraced a common identity and values which very much underpinned the so-called western international community of liberal democratic states.

Rather than defining a particular country or group of countries as threats or potential threats in advance, membership to collective security organizations suggests that members are united around common principles, norms and rules as regards appropriate interstate relations. While NATO is a typical collective defense organization, the United Nations can be considered as a collective security organization. It should not be forgotten that members of the two rival blocks during the Cold War era, NATO members and Warsaw Pact members, also simultaneously existed as members of the United Nations.

NATO is an example of a hard-balancing collective alliance in that members pool their material power capabilities with a view to resisting common external threats. Alliances might also have a strong organizational existence in that members establish formal institutional structures under which they coordinate their actions.

The question of whether alliances are built on the basis of the distribution of material power capabilities, common threat perceptions or common values is an ongoing debate in the academic discipline of international relations. Structural realists mainly argue that alliances come into existence somehow automatically if one particular country develops immense material power capabilities over others and the latter is not in a position to deal with the former individually. Claims to global and regional hegemony have often caused the formation of collective defense alliances.

When Napoleon wanted to put the European continent under French hegemony in the first half of the 19th century, other European powers joined forces to resist the challenge. When Nazi Germany increased its material power capability spectacularly during the 1930s and began pursuing hegemonic policies in Europe, other major European powers likewise formed a defensive alliance between themselves. Those who argue that an alliance comes into existence automatically, however, have a very mechanical understanding of states' international behavior in the belief that if one particular state disrupts the existing balance of powers, others will simply join forces to rebalance it.

On the other hand, scholars such as Stephan Walt contend that alliances do not come automatically on the basis of shifting material power capabilities. Other motivations are needed. He argues that states form alliances should they all perceive the challenger state as a threat that needs to be contained or defeated. Members of alliances should share common threat perceptions. The argument here is that states maintain a balance against threats, not pure shifts in the distribution of material power capabilities within the system at any given time.

Membership of an alliance offers members various benefits. The first and most important of these is an ironclad commitment to each other's survival and territorial integrity. The security provided by the most powerful members of the alliance might also enable junior members to divert their limited material power capabilities to other tasks, such as economic development and social welfare.

NATO seems to be the ideal example in this regard. Of all the reasons why the European members of the NATO alliance could deepen their economic and political integration among each other within the framework of the European Union, the protection provided by the United States seems to be the most vital. Rather than spending on military capabilities, the American security guarantee seems to have enabled European allies to devote their limited economic resources to collective developmental needs.

Second, alliances can also serve as an ideational glue tying members to one another. Feeling part of the same family of nations provides members with a certain status. For example, Turkey has long taken comfort in its membership in NATO with respect to its claim that she is a legitimate member of the western international community.

What happens in the end?

Another question concerning alliances is when they come to a natural end. The consensus holds that when the existential threat posed to the survival and territorial integrity of members ceases to exist, the alliance dissolves. Yet, this is not always what happens. For example, although the Cold War ended with the dissolution of the Soviet Union, NATO has continued to exist.

Despite all kinds of intra-alliance ruptures and points of contention, NATO members have continued to value their membership in NATO. Rather than parting ways with each other and pursuing unilateral or bilateral security strategies, NATO members have taken great pains to maintain NATO's cohesion by adapting to new roles. By enlarging the alliance towards the former communist countries of central and eastern Europe, prioritizing crisis-management tasks outside the scope of Article 5 missions and adopting a global strategy of defeating transnational terrorism, NATO has proved its relevance throughout the post-Cold war era.

The existence of common threat perceptions and ironclad mutual solidarity is what separates hard-balancing attempts from soft-balancing exercises. In the case of the latter, a group of countries strategically cooperate with each other in order to deal with common security threats and challenges more pragmatically.

Yet, they shy away from forming formal alliance organizations as well as adopting an "all-for-one and one-for-all" approach in their relations with one another. It is not certain that they will come to each other's aid should any be attacked by a third country. Countries that enter soft-balancing arrangements tend to have similar threat perceptions, values and international vision, yet they also want to preserve their maneuvering capability in the international scene as much as possible.

The growing strategic cooperation between Russia and China within the United Nations, the Shanghai Cooperation Organization and the BRICS group is an example of soft balancing. Both countries are discontent with the primacy of western powers, particularly the United States, in global politics and question the underlying principles of the liberal international order. They support a multipolar international order in which great powers would have equal say in the administration of global politics.

They have joined forces with a view to resisting western powers within established international organizations, as well as ensuring that their views are taken into account more frequently. Should they fail to dent the primacy of established western powers on existing international platforms, they would likely intensify their efforts to help bring into existence rival institutional platforms.

Transforming the direction of existing institutions in their favor, spoiling them from within or bringing into existence alternative institutional platforms define the boundaries of their strategic cooperation. However, none of these cooperative measures presupposes the formation of a NATO-like collective defense alliance being signed between each.

Despite all benefits of membership in collective defense alliances, one needs to admit that forming NATO-like alliances or maintaining existing ones is becoming more difficult with each passing day. Given that pragmatism, flexibility, multidimensionality and multidirectionality have already become the currencies of today's international order; soft-balancing arrangements will likely eclipse hard-balancing arrangements in the years to come.