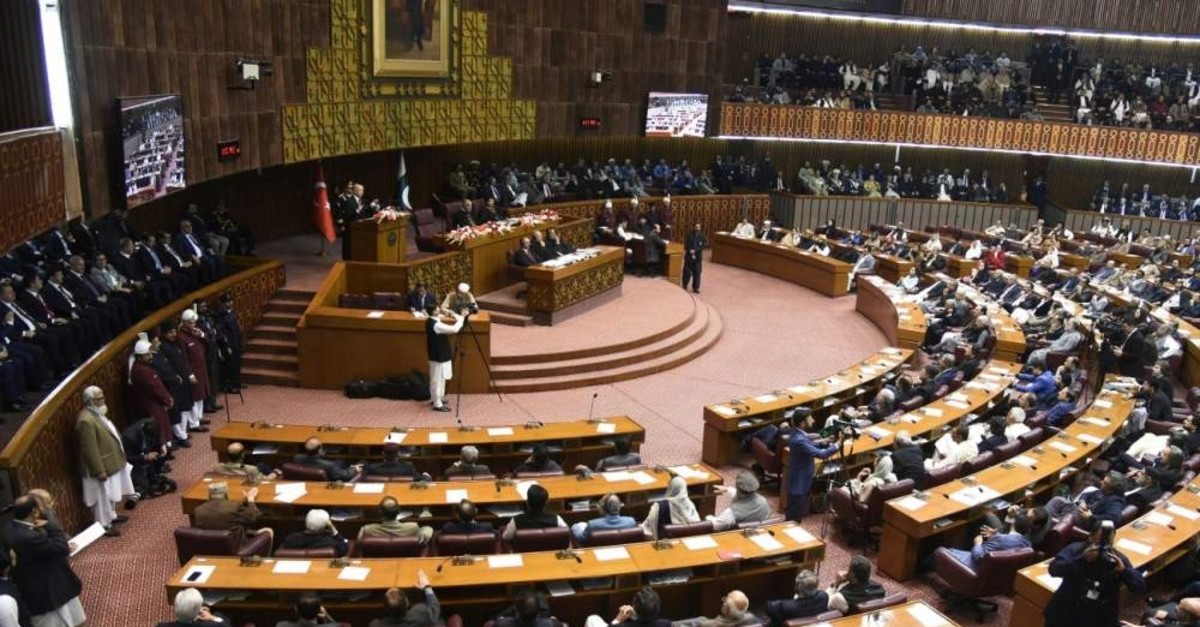 In the contemporary era, economic interdependence is synced with the increasing tendency of cooperation and bilateral engagement of states. This strong connection among states leads them to form partnerships, ensuring prosperity and economic growth, especially when state leaders decide to formulate ties by articulating relations into signatory agreement for future correspondence. The two-day visit of President Recep Tayyip Erdoğan to Pakistan last week distinguishably stands as a valuable visit for both states.

The leadership of both states have clearly shown the willingness to cooperate in all spheres. In Erdoğan's address to the Joint Session of the National Assembly of Pakistan, he acknowledged Pakistan's standing with Turkey rooted in a long history. The president's personality enables to take a straightforward stance. During his address, he comprehensively exhibited his support for Pakistan.

"I thank God for giving me this opportunity. I am thankful to each of you individually for allowing me to address this joint session of Parliament. I would like to convey the greetings of 83 million brothers and sisters in Turkey," Erdoğan said.

Turkey's leadership address calls for the formation of a Muslim bloc to counter all issues, form an economic union platform to discuss the tense relations and so on. Pakistan did not attend the Kuala Lumpur Summit, which created a hindrance for joint collaboration in the region. But Pakistan's first visit to Malaysia and then Erdoğan's visit to Pakistan is expected to instigate a triangular relation by using the bilateral relation mechanism. Erdoğan said, "While in Pakistan, I think as if I am in my home."

Turkish and Pakistani people share a perception of brotherhood which validates both states to have each other's backs, especially in international forums. Turks' level of trust in Pakistan is indicated by the saying that if in any forum Pakistan is present or has membership, Turkey feels like Turkey also has representation there. And, if Turkey is present in any forum, Pakistan will also be directly represented. As both nations are on the same page, it will be easier to create an environment of cooperation.

Erdoğan recognized Pakistan's sacrifices and endeavors to counter terrorism and conceded that Pakistan has been greatly affected due to the war against terrorism. He stated that "we are fully cognizant of the problems faced by Pakistan and will continue to extend our cooperation to them." Turkey and Pakistan are eagerly participating to bridge all gaps and focus on credible cooperation.

The Turkish delegation consisted of investors, CEOs of corporate industries, businessmen and ministers, which shows that the Turkish president came prepared with an intention to cooperate. In the scenario of bilateral cooperation, the deals signed between both states will provide an opportunity to divert the investor's interests to both the states. The investors who opt to invest in Arab states and Europe will have another viable option to invest in both of these states.

In his address at the Joint Session of the National Assembly of Pakistan, Erdoğan showed full support for Pakistan's stance and conveyed a message to the world about his take on the disputed regions. He pointed out that "events that happened 100 years ago in Çanakkale in Turkey are being repeated in IOK (the Indian Occupied State of Jammu and Kashmir) and Turkey will continue to raise its voice against the oppression. How can we forget those (Pakistanis) who prayed for Turkey? Our friendship is not based on vested interests but in love."

Turkey has always supported Pakistan's stance on Kashmir. "Our Kashmiris brothers and sisters have suffered from inconveniences for decades and these sufferings have become graver due to unilateral steps taken in recent times," Erdoğan said.

Turkey has always prioritized the issue of Kashmir and has highlighted the Indian brutality in the Indian-occupied Kashmir. Erdoğan's speech has highlighted the issue in the international media. "The Kashmir issues can be resolved not through conflict or oppression but on the basis of justice and fairness," he said. He stipulated how the Kashmir issue can be resolved without causing any massive confrontation between Pakistan and India. Erdoğan further stated that Kashmir is as important for Turkey as it is important for Pakistan.

While talking at the Pakistan-Turkey Business and Investment Forum, Erdoğan spoke about all incentives that are significant for Pakistan. He indicated that he has thoroughly researched offers for many sectors, from trade to investment, energy to business, and entertainment to the medical field. All the offers or ideas presented at the forum seemed like realistic goals to attain.

The collaboration between both states will pave the way for further cooperation. More venues will be created through the signatory deals signed between the states. Erdoğan stated that "we want to increase the level of commercial and economic relations to the level of political relations."

His words have showcased that his administration is serious about taking bilateral relations to the level of economic interdependence and extended connectivity between both states. He further added that "Turkey and Pakistan, with a total population of over 300 million, have only $800 million in foreign trade, and this is something we can't accept."

This shows that Erdoğan is serious about increasing trade relations to the maximum level. This journey will not be easy but the determination and strong vision will guide them toward a solution. He also highlighted that the presence of Turkish companies in Pakistan working in the Pak-Turk friendship environment is also significant for further collaboration. He further stated that Turkish companies intend to invest up to $200 million in Pakistan. In his concluding remarks, he said, "I invite Pakistani brothers to trust the Turkish economy and have confidence in Turkey's future."

"Turkish (TV) series that are followed by millions of people abroad are watched by Pakistani people as well. We can cooperate and produce movies and series," he highlighted. The collaboration of the entertainment industry will be a vital step toward creating an optimistic perception in both states by relying on soft imagery to convey the message. This soft image collaboration will help in building the intended perception among the masses in an appropriate manner. In addition, Erdoğan also offered Pakistan assistance in the field of medicine due to their level of expertise in the sector.

In order to eradicate barriers between them, both the states will have to gather and utilize all of their resources for cooperation. Both states should assign tasks to people with the required expertise and a good understanding of each other's cultures. One such prominent name in Turkish politics is of Ali Şahin. He has spent seven years in Pakistan which makes him a suitable candidate as the goodwill ambassador for both states. He understands the deep-rooted culture of both states and is vocal about increasing the relations between both states. Şahin was part of the delegation that came with Erdoğan. Şahin tweeted, "My beloved Pakistani brothers, sisters and followers welcome me by saying 'Welcome your second home!' But I say 'No!' I am in my first home as much as Turkey..." The ambassador is a dedicated soul who embraces Pakistan as his own home.

Therefore, Pakistan and Turkey have to create an environment where the maximum potential of both states can be utilized effectively. This will not only benefit both states, but the cooperation and engagement will positively impact the region. This will further aid in the implementation of Erdoğan's offer of dual nationality to both states. Citizens of both states can benefit from a visa-free status. It will definitely boost the tourism industry and will open venues for businesspeople and investors.

* Analyst in international relations based in Islamabad, Pakistan