International law is what we all must abide by: The 'Deal of the Century' case 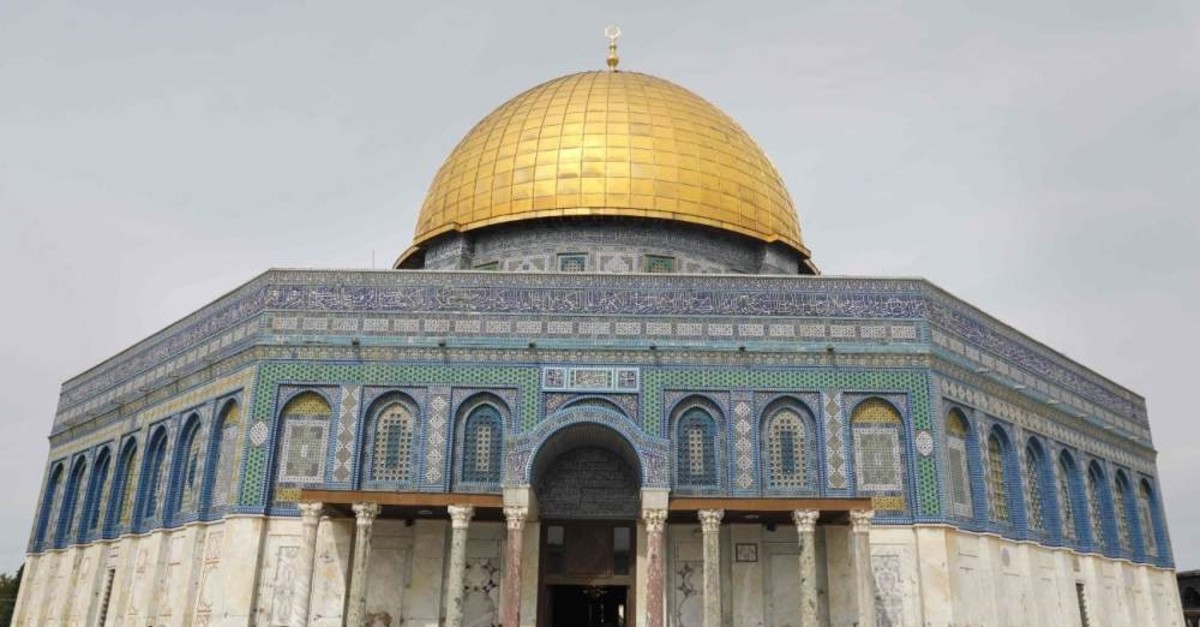 Palestinian Muslim worshippers gather around the Dome of the Rock mosque inside al-Aqsa compound in the Old City of Jerusalem, Feb. 14, 2020. (AFP Photo)
by Ferhat Küçük Feb 21, 2020 2:06 am

The apparent violation of international law would have costs for all of us. The 'Deal of the Century' must, therefore, be stopped – now

One of the popular topics of discussion in the world today is the infamous deal between Israeli Prime Minister Benjamin Netanyahu and U.S. President Donald Trump.

Despite many critics voicing their concerns since the announcement of the deal, the two leaders have continued to claim that their agreement would only serve to bring about regional peace. Coined as the "Deal of the Century" by Netanyahu and Trump, the so-called Middle East peace plan intends to end the Israeli-Palestinian conflict.

Prepared at the behest of President Trump's son-in-law Jared Kushner, the plan contains a number of controversial details including a plan that would prevent Palestine from becoming a viable and sovereign state.

According to the plan, an undivided Jerusalem will be the capital of Israel. During the last 100 years, Palestinians have experienced colonization, exile, military occupation and the ensuing struggle for self-determination. And, on top of that, they have faced a troubled quest for coexistence with a nation which they see as the source of their losses and sufferings.

On the other hand, for Israel's Jews, the return to their ancestral homeland after hundreds of years of persecution all over the world has not brought peace and security. They have been involved in many wars with their regional neighbors.

Palestine came under the British mandate following the collapse of the Ottoman Empire at the end of World War I. The start of the Jewish immigration to the region after that war, which peaked later during World War II, led to conflicts between the Palestinian people and Jews. After failing to cope with the situation on its own, Britain took the issue to the United Nations, and the U.N. Special Committee on Palestine (UNSCOP) was established to bring a solution to the problem. The committee conducted investigations in the region and presented two solution proposals to the U.N. General Assembly (UNGA). The first proposal, known as "minority plan," envisaged a federal state to be composed of Arabs and Jews. The other proposal, or the "majority plan," envisaged a two-state solution.

This two-state solution was adopted at the UNGA by a majority vote and approved by Resolution 181. The majority proposal was rejected by Arabs and Palestinians, but Israel declared independence on May 14, 1948, by adhering to that resolution. Upon that, Arab states formed a joint military force and attacked Israel but suffered a defeat that is remembered by Palestinians as Nakba (or "disaster" in English) today. At the end of the war, Israel expanded its territory and large numbers of Palestinians were forced to leave their lands.

What about the law?

International legal codes reveal that what the Israeli state is doing in Palestinian territories is a clear violation of the law. The Jerusalem crisis alone proves this. It is safe to say that East Jerusalem is under occupation in violation of international law, and this situation was openly confirmed by various U.N. resolutions and the practices of individual states.

An analysis of UNGA and U.N. Security Council (UNSC) resolutions adopted since 1947 paints an interesting picture. Even in the resolutions it adopted following Israel's occupation of East Jerusalem in 1967, the UNGA pointed out that Israel's actions concerning Jerusalem (without east-west divisions) that could alter the city's legal status are invalid.

Customary International Law is among the primary sources of international law. The term "International Precedent" that is of a binding nature within this context is different from the term "precedent" in everyday usage. Indeed, the views in Trump's statement that Israel was already using Jerusalem as its capital without facing a serious objection are important in this respect.

The violation of international law is unacceptable not only for the Palestinian cause but for other similar disputes around the world. Therefore, the crisis caused by the "Deal of the Century" is not a regional or political issue anymore but a test for international law to pass.