Russia must choose either Syrian regime or partnership with Turkey 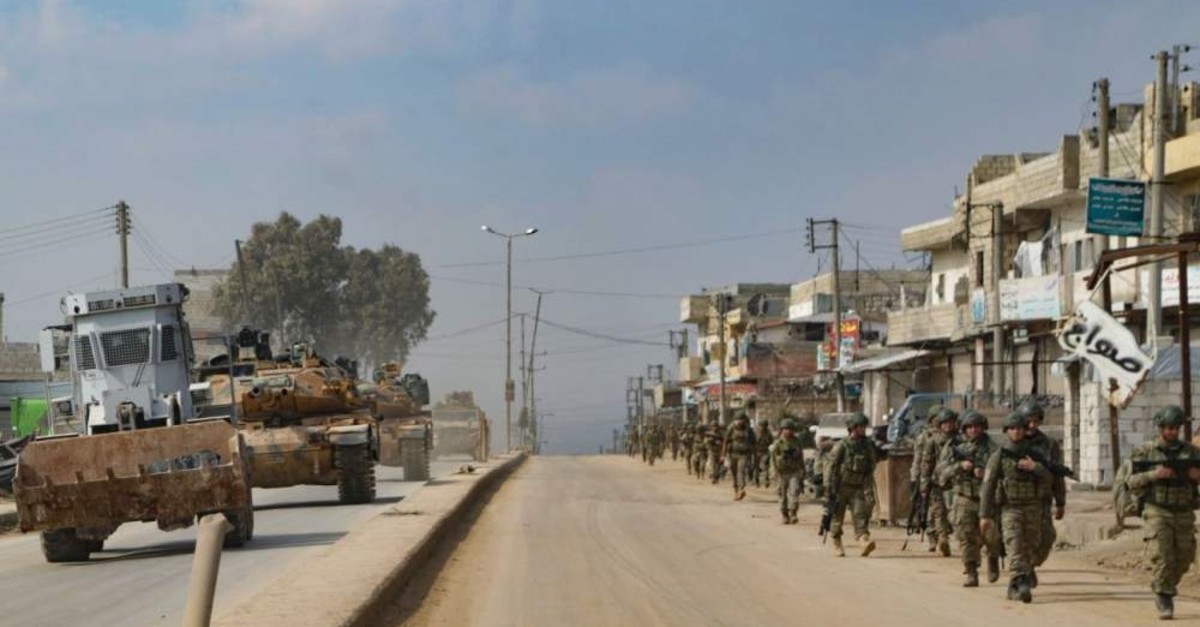 Turkish troops patrol on foot and in military vehicles in the town of Atareb in the western countryside of Syria's Aleppo province, Feb. 19, 2020. (AFP Photo)
by Ahmed Al-Burai Feb 21, 2020 2:06 am

The controversial Russian philosopher and special representative of the Russian president, Aleksandr Dugin, argues that the current era will witness the rise of the Russian Empire in the Middle East and the demise of the American hegemony. To achieve this, he believes, Russia should work to appease Turkey and Iran and enhance strategic relations with them as partners, not rivals.

Undoubtedly, Russia has worked conscientiously to rebuild its influence in the region since the mid-2000s, but its efforts only began to pay off in the wake of the Syrian revolution and its military intervention. Russia's re-emergence in the Middle East and North Africa is enormously manifested in economic and military initiatives. Militarily, Russian activities include its efforts to engage in expanding its military presence in the region and particularly in the Mediterranean. Economically, its role in the Qatar crisis in intensive energy diplomacy and its growing exports to MENA. It has also proficiently managed to overcome the diplomatic isolation in which the country found itself after the annexation of Crimea by playing the Middle Eastern card in partnership with Turkey and Iran.

On the other hand, Russia is a key moderator for the Palestinian-Israeli conflict. It is attempting to play a more influential role in the Palestinian internal reconciliation talks. Moscow hosted the last round of talks between the Palestinian factions in 2019. Reportedly, Russia has been trying to host Israeli-Palestinian peace negotiations but its attempts have not borne fruit because of the Israeli intransigence.

However, these regional successes are expected to cast dark shadows on long-term gains. The military support of a dictatorship in Syria will have serious repercussions on Russia's long-term presence in the region. Its current deceiving influence should not be taken for granted.

Since the kick-off of the Syrian revolution in 2011, Russia has been a firm backer of the Syrian regime, unlike Turkey, which decided to support the people's aspirations of a political democratic transformation. Despite these diagonally divergent standpoints, both countries succeeded in upholding their friendship.

In the wake of the killing of Turkish soldiers in the northwestern Syrian province of Idlib earlier this month, President Recep Tayyip Erdoğan said, "Either Russia should rein in the regime's bombings in Idlib or our patience is running out, and we will do what is necessary from now on." Ankara said it will use military power to drive back the Syrian forces unless they withdraw by the end of February, and President Erdoğan said Turkey will strike regime forces anywhere in Syria if another Turkish soldier is hurt.

On the operational level, Turkish officials argue that Moscow hasn't pressurized the regime forces enough to stop targeting the Turkish military observation posts. The Russians, however, proclaimed that the Turkish military had failed to warn their Russian colleagues in time about any possible troop movements.

On the political level, the Russian leadership claims that Ankara has failed to separate the "moderate opposition groups" in Idlib from groups formerly linked to al-Qaida terrorist organization. This is precisely the very narrative that Damascus itself disseminates. Thus, it's quite palpable that the Russians see the latest escalation from the Syrian prism. On the other side, Ankara argues that the Russians and the Syrian regime have obstructed the political efforts of the Astana constitutional committee working on hammering out a political transition in Syria.

On Jan. 29, Erdoğan bluntly slammed Russia for the first time, accusing its leadership of "not being sincere to the Astana and Sochi agreements." More interestingly, when he was asked about the Astana talks, he replied, "There is no Astana process anymore."

In 2017, both countries have worked jointly to politically settle the ongoing conflict in Syria. But the volatile developments on Idlib's frontline turned the de-escalation zones into a battlefield for ferociously escalating conflict.

Undoubtedly, Turkey and Russia have huge common interests on many levels. Among these ties are the Russian S-400 missiles that have been partially delivered to Ankara despite some NATO members' vehement disapproval and Washington's threat of sanctions against Ankara. Economically, both countries have colossal trade deals, including the gigantic Black Sea gas pipeline.

In Syria, interests are different. Turkey cares about Idlib for two key motives. Firstly, the refugee problem could explode in Ankara's face if the province falls in the hands of the Syrian regime. A new inflow of refugees would spell disaster for Turkey, which is already accommodating nearly 4 million Syrian refugees.

Secondly, if Turkey abandons Idlib, it would jeopardize the northern border stretch of Syria that has been cleared from terrorist elements in three cross-border operations by Turkey – Euphrates Shield, Olive Branch and Peace Spring. Turkey's withdrawal would mean that those elements would become active and present an imminent threat to Turkish national security.

More than once, Turkey has been frustrated by its allies in NATO, who have been utterly inconsiderate of Turkey's national security. They have left Turkey to face the refugee crisis and the threat of internal and external terrorist organizations by itself. NATO's idleness and irrelevance to the Syrian conflict played into Turkey's quest to develop more effective partnerships. Iran and Russia have enormously benefited from Turkish cooperation, and Turkey has also achieved some of its short-term objectives. But its cooperation with Russia is being seriously tested.

'For peace, prepare for war'

Undeniably, there is substantial anger in Ankara over Moscow's unequivocal support for Damascus after the regime attacked and killed Turkish soldiers. Nevertheless, before beating the drums of war, bilateral shuttle diplomacy will continue to work toward a solution to this impasse.

Ankara does not have the appetite for being dragged into a quagmire of an all-out war with the Syrian regime, given the support of the Russian air force. Likewise, Russia is not interested in bringing about an extended conflict with Turkey over Syria.

Despite many common interests between Turkey and Russia, the Russian leadership has continued backing the Syrian regime. In light of this consistent Russian policy, which is unlikely to change, at least in the short-term, the only route that both Russia and Turkey might take is the rejuvenation of the Astana peace talks.

By doing so, Turkey would be able to impose a cease-fire and prevent the influx of refugees into its border districts and would be able to push for the continuation of the peace talks for a political transition in Syria. With the ongoing deployment of military hardware in Idlib province, Turkey sends a clear message to the regime and the Russians, "If you want peace, prepare for war." Apparently, Russia has taken the message as the Kremlin hasn't ruled out the possibility that Vladimir Putin and Erdoğan will meet in person in the near future for the specific purpose of discussing potential solutions to the Idlib conflict.

* Palestinian-Turkish academic, journalist and visiting researcher at Leicester University who holds a Ph.D. from Istanbul Technical University in political campaigning.