From one tutelage to another 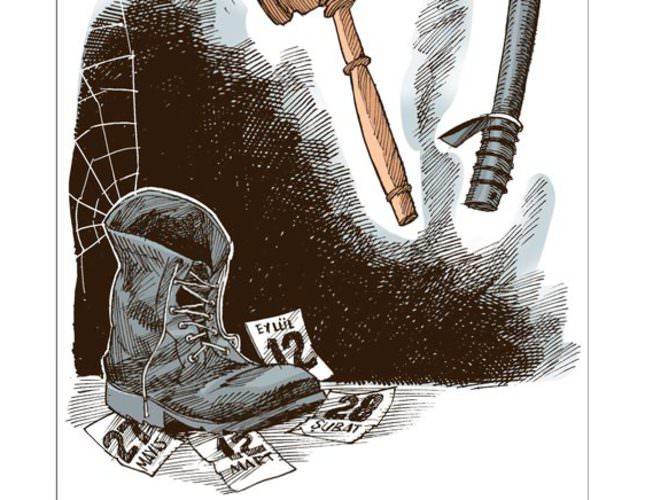 Turkey, which is in the process of freeing itself from a system of tutelage, is in danger of coming under the influence of another

Turkey was ruled by a system of tutelage for 90 years. The May 27, 1960 military coup d'état, which put an end to the first attempt of a multi-party democracy, the 1950-1960 Democrat Party government, was a breaking point.

In normal democratic regimes, the parliament is "the main center" that represents the people's will. A party that wins the majority in parliament through elections governs the country.
There is no power superior to it.

However, the constitutional system that resulted from the 1960 coup placed the military and the judiciary somewhere above the parliament. From 1960 onwards, the National Security Council was structured in a way to ensure the military had the final say in all the main issues of the country. The military created an undisputed dominance over politics as the ultimate "decision-maker." The regime of military tutelage, with the support of the judiciary, gradually became stronger.

Meanwhile, elected governments either reached a settlement with the regime of tutelage or agreed to share a significant part of the power.
Taking advantage of the absence of violence and low domestic tension, governments tried to extend their zone of influence. During these times, disputes between civilians and the military would intensify.

In the post-1960 era, some officers attempted additional coups in an effort to "end the revolution" they believed was only "half done." However they failed. On March 12, 1971, they ruthlessly intervened in politics and forced the government to resign. The legal and constitutional changes instituted by the new government served to strengthen the tutelage. Military tutelage was at its strongest following the Sept. 12, 1980 military coup. A new constitution was inaugurated and with it, politics became even more entrapped.

The first resistance against this tutelage took place after 1983 under the leadership of President Turgut Özal and those around him. After his suspicious death, Turkey entered into an interim period . A pro-Islamic party led by Necmettin Erbakan became part of a new government in 1995. This was the beginning of a new era. Since the inception of the republic, this was the first time an overtly Islamic prime minister was the head of the government. This was something the system of secularist military tutelage could not tolerate.

On Feb. 28, 1997, a set of measures were taken against the religious prime minister by the elements of tutelage system. The government was overthrown with Erbakan prosecuted and found guilty. His party was also banned from politics.

The "Islamist movement" could not garner enough support to head a government until the 2002 elections. After gaining political maturity under Erbakan, Tayyip Erdogan and friends, who called themselves "progressives," founded the AK Party. The party was able to garner enough public support in the November 2002 elections to form a single-party government.

However, winning the majority in elections and forming the government was not necessarily enough to "govern." Those who wanted the continuation of military tutelage could not handle the fact that AK Party was the government.

Despite certain coup attempts in 2003 and 2004, AK Party continued to win electoral victories.
The 2007 presidential elections was another turning point. The military and the judiciary were united and they implemented various measures to prevent Abdullah Gül from becoming the president. The secularist portion of the society, believing their lifestyles and privileges were under threat, held protests in April 2007. There was a crisis and early elections were called. AK Party came out of the elections even stronger.

The military and the judiciary, in response, tried to shut down Erdogan's party. The Constitutional Court rejected the closure of AK Party but it was a very close call.

In a raid on a shanty house in Istanbul's Ümraniye neighborhood on June 12, 2007, some grenades were found. In the following days, the police took some suspects into custody along with some arrests.

Later on, the investigation expanded to include top commanders and the coup trials followed. The process resulted in the broad liquidation of the military's power over politics. European Union harmonization laws were passed and the legal foundations of the system of military tutelage were greatly weakened.

During the process that begun with Ergenekon and continued with the Balyoz (Sledgehammer) and Kafes (Operation Cage Plan) trials, some unjustified and extralegal measures were also taken. In addition, as a result of the KCK operations against Kurdish politicians, thousands of people were arrested. Furthermore, arrests of a group of intellectuals were sought under the guise of "membership to a terrorist organization." At the same time, the chairman of Fenerbahçe sports club and a group of footballers faced an "operation," accused of being "members of a criminal organization" and match-rigging.

Among the most notable arrests of the time were those of a police chief (Hanefi Avcı) and two journalists (Nedim Sener ve Ahmet Sık). All three were known for their stance against the Gülen movement. Police Chief Avcı had noted that the movement had become a "force of influence" within the police force. Sener and Sık, in their books, had focused on the illegal organizations formed by the movement.
The system of military tutelage was weakening.

However, the many arrests that were part of these trials had created widely-held impression that the "Gülen movement had created a system of tutelage within the judiciary and the police force."

There is a considerable historical buildup behind the Dec. 17, 2013 operation against the government. Approximately 2 years prior to that date, on Feb. 7, 2012, there was an operation aiming at the arrest of the head of the Turkish national Intelligence Agency (MIT). Later it became clear that policemen and prosecutors linked to the Gülen movement were behind this controversial operation. Publications linked to the movement published news articles and commentaries widely supportive of the MIT operation. In this period, the prime minister stated that the operation also targeted him.

In many respects, the Dec. 17, 2013 operation could be seen as the continuation of Feb. 7, 2012. It appears that the core cell, which had taken over the "critical points" within the police and the judiciary, had decided that the time had come to launch the operation.

Those who supported the recent operation frequently voiced their claim that "the prime minister would soon be handcuffed." It was clear that the organization, which had infiltrated into the state and used the information and documents it collected over the years to launch the operation, aimed at nothing less than the toppling of the government, the break-up of AK Party and creation of an alternative leadership.

In other words, it was obvious that the goal of those who led the operation was to force the prime minister to resign rather than uncover any corruption.

If the government had not or could not take as clear a stance against this attempted tutelage as it had, Turkey could have faced a deeper crisis.

The existence of judges and prosecutors, who apparently take their orders from the Gülen movement, acting as part of a "parallel structure" rather than as part of a centralized state hierarchy is unacceptable. There can be no democracy in countries where this is considered normal. This is an issue of principle linked to Turkey's future and the deepening of democracy.

This clash and the contradiction cannot be clearly understood without noting the reconciliation process underway with Kurds. The real reason why the arrest of the MIT president was sought on Feb. 7, 2012 was his presence at peace negotiations with the Kurdistan Workers' Party (PKK) conducted in Oslo.

The same "core cell" ensured that Kurdish politicians were the main targets of the KCK arrests and had taken a clear stance against the peaceful resolution of the Kurdish problem. Some still exploit the efforts of this core cell in order to wage a propaganda campaign against the government, claiming that "there are negotiations with terrorists and PKK's imprisoned leader Abdullah Öcalan will be released."

Since the beginning, "the parallel structure" opposed the search for a peaceful resolution and exploited it in order to "enflame nationalism."

National will is paramount

The removals and reassignments within the judiciary and the police after the operation are portrayed as an "attack on judicial independence" by opposition parties, opposition columnists and Gülenist publications. The secular segment of the society and the columnists who represent them used to see the movement as a threat to their lifestyles and as their enemy. It is interesting to see that they now become allies.

We can say that a new neo-Kemalist front, with the alliance of the Republican People's Party (CHP), the Nationalist Movement Party (MHP) and the Gülen movement, is in the making. No matter what happens, one fact needs to be well understood. No government can stand aside while "the main institutions are run by an alternative authority."

The main point of tension right now is how to give an end to this tutelage system. In other words, how will this "organized structure" that threatens an elected government be disbanded?

The new Turkey will be a country that can create a durable peace with the Kurds, restructure its constitution on the basis of the acceptance of identities and internalize the supremacy of democracy, rather than a country that is ruled by a "parallel structure." *