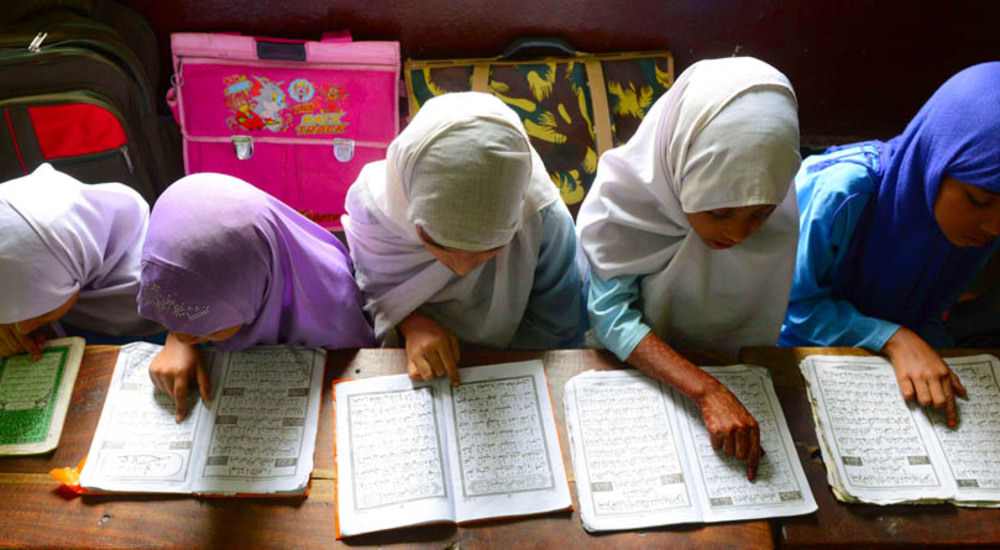 by Sana Qutubuddin Feb 26, 2014 12:00 am
A recent visit to India proved to be a fortuitous venture in engaging with and addressing Muslim youth in New Delhi, Agra, Aligarh, Guwahati, Hyderabad, and Mumbai.

In general, the challenges India's youth are dealing with are similar to their contemporaries, 16-24 year-olds, around the world that stem from an increasingly globalized world order. In many respects, the issues facing Indian Muslim youth mirror their societal counterparts along socioeconomic and minority status lines. However these lines are more entrenched for Muslims because they do not benefit from minority status quotas as Dalits do, making social mobility a more difficult task. They are the fastest growing population in society, with the Indian Muslim birthrate being the highest in the nation. It is 6 times the national average.

Unlike the many negative connotations that are associated with globalization; there is also a tremendously valuable national self-assessment that is giving rise to new dialogue about gender relations, multiculturalism, and creating a more inclusive society that is allowing for incremental progress in the respective areas. One of the greatest obstacles peculiar to Muslim youth across socioeconomic lines is a void of formidable leadership examples, opportunities from within their communities, and understanding of one's self in light of popular frames of reference.

There is not one aspect of life that has been left untouched by the tidal wave of change that globalization brought upon since the opening of India's markets to the world in 1997. The socialist oriented fabric of the nation was ripped asunder and has brought upon a variety of social, psychological and moral ills as well as rapid socio-economic disparities. Stemming from an ancient history of religious and economic segmentation, the national obsessiveness with class/ caste/status is renewed within popular conscious through a fixation that the idea that status can be bought through the power of consumerism, a more prevalent mind-set for youth from more financially secure homes. The allure of low-interest loans has caused many young adults from middle class families to choose academic paths that offer them status but limited opportunity to become wage earners. National policies recently passed by Parliament give international corporations direct access to the masses and greater ability to monopolize the domestic markets. This has had a devastating impact on the most socio-economically disenfranchised.

Conversely, the exposure to ideas, principles, and international social norms brought about through globalization has also opened up dialogue about minority rights and access to national programs that ensure equal opportunities to education for all as well a greater need for understanding about women's rights.

The sense that there has been too much change, too soon in terms of national economic policies has been felt sharply by a majority of India's Muslims. Given the number of India's Muslim population and negligible Muslim political representation (Over 20% of India's population is Muslim and only 2% of the elected Parliamentary representation); the youth are generally not familiar with Muslims in roles of leadership beyond what they perceive as leadership coming through the lens of Bollywood.

Their understanding of themselves as Muslims comes through popular culture, which focuses on reinforcing negative stereotypes; a Muslim can either be a gangster or a one-dimensional religious figure that lacks the dynamism with which the rest of humanity is portrayed. Youth that come to understand themselves in light of the way the society they live in thinks of them are often left with crises of identity. In order to meet the needs of the youth, the needs of the mind are a necessity.

In this course, prioritizing education is at the heart of the matter. A nurturing atmosphere of trust must be created in which the educational institution is to thrive. Indian Muslim youth are inextricably linked to their families and this must be taken into account when devising plans of action. Community centers must be equipped to offer pertinent advice on career counseling, advantages of technical education, health issues, family counseling, and computer literacy. It is paramount that the most competitive Islamic institutions of higher learning throughout the country reclaim their historic leadership roles by devising strategies for greater educational and political empowerment, as well as initiate a national dialogue of assessing the negative popular portrayal of India's Muslims.