Masculinity crumbled under the coup 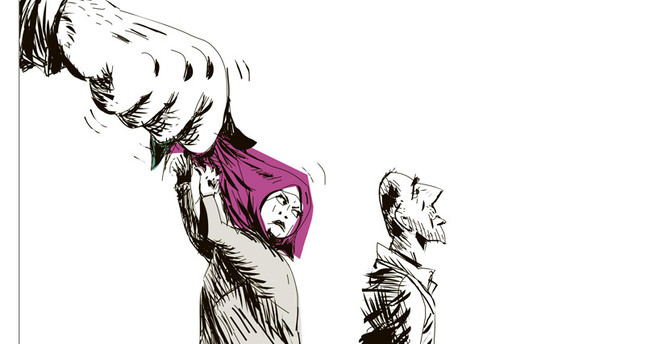 Oppression and prohibitions on different facets of life, such as schools, work, television and newspapers, framed the Feb. 28 military intervention as a deplorable influence in every aspect

Although it has been over fifteen years since the Feb. 28 military intervention, its social, economic, political as well as psychological effects are still ongoing in different parts of the society. Feb. 28 was a turning point in the history of Turkey.

Some called it the post-modern coup while others viewed it as a necessary military intervention in defense of maintaining the secularity of the state.

During and after Feb. 28 there were and have been many unresolved murders, a heap of dismissals, blacklisting of devout Muslims based on their appearance and their devotion to practice of their faith. In this unjust system of blacklisting, women with headscarves were banned from schools with pious businessmen labeled "green capital."

In hindsight, this was not the first military intervention in the history of Turkey. The country has a long and unstable history of military coups and interventions since the declaration of the Turkish Republic in 1923. Feb. 28, 1997 was the last coup to date. It was another breakdown for democracy affecting devout Muslims the most.

Unlike the earlier three interventions, the post-modern coup of '97 seemed less violent, because it was mostly a result of public relation campaigns, and unresolved murders never dealt by the government. Although all four interventions were done in the name of producing a stable and secure environment to maintain the secular state, the result only played favoritism in the name of the republican elite and protecting their status in the government and other private and public sectors of society.

The military has taken part in public relations issues by promoting national security and protecting laicism to raise awareness in the public on the internal and external constraints that it prescribes.

The military did the same thing during the process of Feb. 28. Most people did not feel safe, neither economically nor socially. The most important campaign discourses were "preventing the reaction" and "protecting laicism". While certain television channels, newspapers, academics and columnists were supporting the military intervention, others were labeled political Islamists or seen as a threat of the separatist organization in the name of fighting against the reaction. Among them, some journalists were expelled for not writing and speaking in favor of the military intervention.

Furthermore, the name of specific businesses and institutions were classified in the media as enemies of the secular Turkish Republic. Certain companies were labeled "green capital" and the military made a public announcement for citizens to refrain from doing business with these companies. These demands were nevertheless political, economic and psychological methods of lynching to put pressure on Islamic-based organizations.

On the other hand, spreading oppression to a much broader group of society created unity and reaction in the long run. The visibility of the headscarf made the religious women the primary target of the coup. They were barred from schools, work places and at times, even from the public sphere, where they needed to get service.

Some people believed this ban served as an excuse for not recruiting female employees as a result of the patriarchal system. Although there is a group of men who fit this description, there is another group who wanted to support these women, but were stopped. This piece is about this group in particular.

It also affected the socially constructed identities, especially masculinity and femininity, and their changing nature in accordance with the dynamic socioeconomic and political environment.

Although different reasons and results of Feb. 28 have been discussed, the position of the pious men who were ineffective during that time period has not yet been discussed.

To better understand society, it is necessary to understand the macro and micro parts of it in detail, which includes family, women, men, children, et cetera.

Although the Feb. 28 process was effective for both religious men and women, the perspective and personal experiences of former Islamist men have not been analyzed.

Who are these men? What did they think and feel during and after the military intervention carved into history as the Feb. 28 coup? Although these men generally seemed withdrawn when it came to protecting or defending the rights of women wearing the headscarf, being unable to get involved and having to keep their silence caused long-term negative results.

After the end of Feb. 28 process, the women who suffered from the intervention have spoken out regarding their psychological state, the trauma, and how they felt abandoned by their male counterparts. None of the men have spoken of their inability and desperation in their relationships with their wives and daughters. In the aftermath of the process, a distinct change took place in family life and in the gender roles of men and women.

This brings us to the question of whether gender roles have changed in Turkish society as a whole. If so, what made this change possible?

Thus, for a man or woman to be accepted in society, they are required to fit an identity dictated by the society's customs and gender roles.

In this respect, being the man is directly related to power and strength that leads to a superiority idea. Interestingly, this superiority idea is not between the different sexes, but rather among the same sex, creating a male-dominated competition. This thought process has become a vicious circle excluding women from equal opportunity and competition among genders.

Today, especially in the last 15 years in Turkey, the confusion of the new conservative men has taken an unexpected turn. Although this identity of masculinity is not something new for the Turkish society, a change in new social variables, women's expectations, and family lives affect men differently now as opposed to the past decade. This has created an issue for men who are left to find the right place for themselves within family and society.

But today we witness that alternatively, the importance of religiosity changes from time to time and within different aspects of lives, as seen in the framework of the Feb.28 process. This period traumatically and psychologically affected former Islamists.

Although trauma was used mostly for women who experienced that period, it is probably the first time it is used for men in this respect.

During that time, many Islamists felt that their private territory -their women- was captured by the government. After losing their social and material power, these men similarly lost power and voice in their private lives.

This gives a perspective that shows how this kind of crisis can last for years, even after the event takes place. The men, who have experienced this crisis in their lives, experienced diminishing power and declined satisfaction in protecting their beloved ones. This crisis caused a huge change in the idea of being a man or keeping their masculinity.

Losing power in the work place and social status, and more importantly, their "inability to get involved to end the pain" of their families during the Feb. 28 process pushed the men through a trauma that created long-term crises.

Keeping silent and pretending nothing happened to their loved ones was one way of handling the situation. Although they wanted to be a part of the situation, there was not much they could do. As a result they felt their paternal power taken away from them, leaving them with anger and frustration alone that continues to this day.

These men were physically free, yet their psychology held their feelings and thoughts captive. These men existed, but they were not permitted to utter a word when it came to women's right. If they were seen or heard to support women who voluntarily chose to wear the headscarf as part of their religious faith, they were imprisoned, blacklisted and worse, fired from their jobs if they worked in the public and government sector.

Interventions in the work place and social life had a long-lasting negative effect on these men. These men could not hire women wearing the headscarf, because of the restrictions brought on by the government after the Feb. 28 coup. In other words, they were forced to ban and exclude women with headscarves from the work place. To leave these women alone in that situation made those men feel powerless and helpless. They watched their female counterparts being excommunicated from the socio-economic and political sphere of life in Turkey. This scenario was a real tragedy for many who witnessed such injustice unravel before their eyes while all they could do was to watch in silence.

These former Islamist men could not ask the women to wear a headscarf in the work atmosphere although it was part of their religious beliefs, it was what they wanted for their women. This was one of the most important traumas of this crisis. Instead of having the same painful experience again, they preferred to leave behind what their views and beliefs. The oppression and rejection enforced by the government caused a major change in expectations of the women and the ideal female prototype.

During the Feb. 28 process, these women who entered the social life and workforce, becoming part of the society, returned stronger and more willful. They created opportunity spaces for themselves within the socio-economic sphere. Perhaps this time the number of women struggling for rights was higher than in the past, so the effect of the process influenced a much larger group. It was the first time when men felt hopeless and insufficient for their wives and daughters, while women were battling to fight for equal rights. The masculinity idea of these men crumbled under governmental oppression. This offset the change in gender roles, responsibilities and social expectations.

Those women had already fallen behind within society and the workplace for many years, and did not want to be in the same situation any longer. On the other side, men did not know how to treat these new strong, powerful and socially active women. Moreover, they did not know where to place these powerful women in both the social and family life.

After the oppression, prohibition, trauma, and crisis, the construction or definition of maleness or masculinity has changed unwittingly. The process made these women more social and visible while changed men's expectations of women as spouses. Hence, the new model gender roles have been influenced by political, economic, and social effects as a result of the post-modern coup.