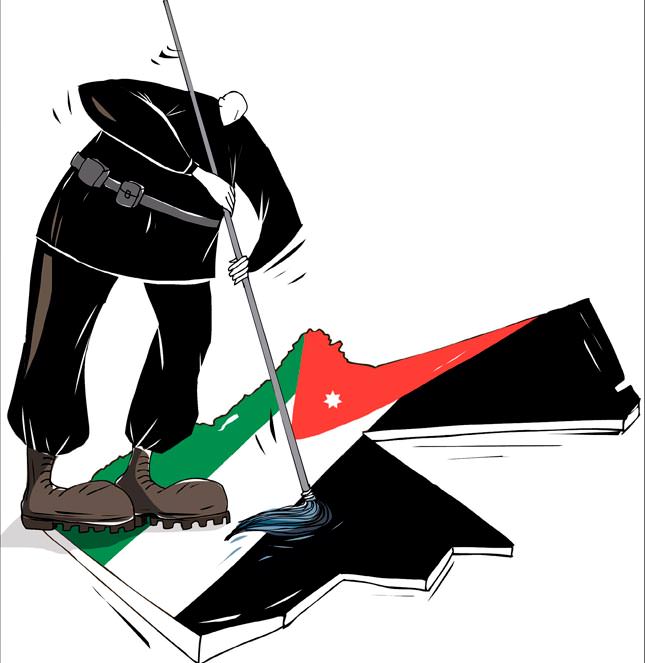 States neighboring Syria, such as Lebanon and Turkey, have been forced to contend with the repercussions of the war next door, but Jordon may be the country most at risk of destabilization

A recent spate of ghastly car bombs has enameled Lebanon with the awkward accolade of being the weakest link in terms of regional stability within the context of the Syrian war. Despite a new cabinet forming, pundits will no doubt continue to warn of doomsday and "spillover" scenarios in the country where a weak government and floundering economy have both been accompanied by a precarious security situation as the conflict in Syria rages. Yet it is becoming increasingly hard to ignore Jordan as a close second, as this country recently took the spotlight in Washington when its king visited the U.S. vice president to mull over the Syria war, before heading off to California to meet the president on the last day of his visit.

Unlike Lebanon, which has a polarized dimension to both its own internal politics and those of neighboring Syria, Jordan's link to the Syrian war is far more dramatically tilted towards Saudi-backed opposition groups. Jordan's relations, unofficially, with Saudi Arabia run deeper on a grass roots level. Furthermore, recent events in the last few weeks are beginning to throw the spotlight on Amman whose political and economic set up is far from what experts would call "stable."

The problem is firstly with the political establishment in Amman which is fervently pro-American (and hence pro-Israeli) in nearly all of its policies, a stance which is easy to interpret as a strong point for Jordan, but in reality makes it a clear target for amongst others, Syriam President Bashar al-Assad and his conspirators.

Secondly, its people who are at odds with this policy and lean, in reality, towards Saudi Arabia's uncomplicated and much preferred Salafist ideology on the battlefield. In the past, this awkward impasse was largely accepted as a quirk of Jordan's multi-faced regional policy, a sort of "poor man who changed his cheap suit each day depending on the house guests" as one diplomat in Beirut explained off the record to me.

However, this duplicitous front is now becoming a focus of concern as Saudi Arabia, certainly with its regional policy toward Iran and the Syrian war, is drifting away from Washington's sphere of influence. Moreover, just recently Jordan had been making overtures to thaw its relations with Iran, placing it at odds with its two key allies, Saudi Arabia and Israel. So, how much longer can a weak government in Amman take the strain? And are there real risks of a Jordan "spillover" from the war in Syria?

A number of recent events are cause for concern but none more than the alarming rise in illegal gun ownership. The government has no real hope of controlling this phenomenon, nor the numbers of Jordanians crossing the border into Syria to fight with Salafist groups. Lately, the government has waged a campaign to arrest Jordanian jihadist fighters trying to cross the frontier with at least 70 already in prison awaiting trial. Up to 2,500 Jordanians are thought to be fighting with Jabhat al-Nusra in Syria.

These two issues on their own are cause for alarm for Jordan's ruling monarchy, but viewed within a prism of political problems which had the EU and U.S. concerned during the Arab Spring heyday that Jordan would fall into the abyss, Washington and Brussels might well regard Jordan as also vulnerable, like Lebanon, to a "spillover" scenario.

Jordan already receives generous financial aid and according to an EU official, Brussels is monitoring the rise in gun sales in Jordan, while remaining more cautious, unsurprisingly, when talking of a "spill-over." "There are many potential implications, of a political, economic and trade nature," explained a spokesman for the EU's foreign policy chief Catherine Ashton. "The increasing number of refugees from Syria - over 580,000 by mid-January 2014 - fleeing the atrocities of the war has a major impact on Jordan's natural resources (notably water), its economy and trade flows, and puts tremendous pressure on its educational system, health care services and informal labor market. In recognition of the vital role Jordan has played in providing support and hospitality to the refugees, the EU has granted over 230 million euros so far for humanitarian and development aid."

Member of the European Parliament (MEP) Ana Gomes doesn't agree that it's about how much money can be pumped into Jordan. The Portuguese MEP, who in 1992 was a Member of the EU Presidency team working on the Middle East Peace Process, warns though that "there is a very tangible danger that, on top of internal escalation, the civil war and the humanitarian disaster will impact beyond the Syrian borders" she explains. "There is a real danger of spillover and further destabilization of the neighboring countries, which is just as big as the opportunity for the countries in the region, namely Turkey, Iran, Saudi Arabia and Qatar, to contribute to a political and peaceful solution to the civil war." But in the case of Jordan, the war in Syria "actually adds to the existing tensions resulting of the fact that the majority of the population is Palestinian, framed by Palestinian conflictuality and unsatisfied with its democratic representation in Jordan." Filling this democratic deficit might explain illicit gun sales sky rocketing, which is just the latest thorn in the side of Jordan's King Abdullah, who has certainly got a lot on his plate.

Even before the war in Syria permeated the region, Jordan had far more political problems than other kingdoms. The chief one was its ailing economy and a growing resentment of government corruption. Jordan is often compared to Morocco by economists and political analysts covering the Arab world. Yet unlike Morocco's revered King, regional experts do not speak of King Abdullah's reign in Jordan as a regime like a house built on firm ground. In fact, the monarch and its system have experienced gradual erosion in its popularity in recent years.

The crux of the problem is that King Abdullah has simply not done enough about poverty and inequality in Jordan. The last thing he needed was a sectarian war in neighboring Syria, a crippling setback for any reform plan that may have been in the making. Just to accommodate the cost of half a million Syrian refugees on an economy which the EU and International Monetary Fund (IMF) recently bailed out twice last year with soft loans, might have been enough for the monarch to feel uneasy on the throne.

King Abdullah also has much more to worry about before he mulls the statistics of poor growth and rising unemployment. His main headache is the very real threat of Salafist radicalization and other Islamic groups being enticed by foreign backers to challenge his rule through Arab Spring style demonstrations. Since the Syrian war started though, any clashes which the king might foresee between Islamic groups and security forces now have a new dynamic, which will only serve to weaken Jordan's stability further: foreign fighters who may come over the border from Syria to support their largely Palestinian comrades who were coming under fire from Jordanian police. An almost identical scenario was played out recently in Iraq where a major governmentinitiated attack on al-Qaeda terrorists resulted in hundreds of fighters based in Syria swiftly moving back to support their comrades.

In the case of Jordan the payback would be identical. The risk is that Jordan's government and king become a focus of hatred the more that Amman becomes a staging post for U.S. forces to train Syrian fighters while Israeli intelligence officers liaise with senior officials. Jordan has just solicited itself to too many foreign powers to be taken seriously.

Unlike Lebanon though, in Jordan there is a visible prize to be won for Islamic groups and the king is only too aware of how radicalized Salafists have their eye on new positions of authority in a post-Assad Syria or even in Jordan itself. The spoils of war are even sweeter on home soil and many are also conscious of the Muslim Brotherhood's Qatari-financed influence within Jordan. But, as Ann Gomes MEP argues, the answer lies in a diplomatic solution with the regional superpowers, a process that Jordan should not be a part of, for its own sake. "I don´t believe that there is any solution to a conflict in Syria without Iran and Saudi Arabia coming to some kind of understanding," she said. "Jordan taking sides between the two would risk its own stability."

The recent rise in gun sales is a tolling bell and indicator of that stability ebbing away as the number of firearms being purchased and the rate at which they are being bought should cause alarm for those who need Jordan to stay firstly Westernized and secondly with a strong monarch (as those two components are not necessarily exclusive to each other).

According to a study by the Jordanian Society for Political Sciences, 25 percent of Jordanians own guns, legally and illegally. "The conflict in Syria makes people feel unsafe.

They do not know what is coming in the future," Seri Nasser, social sciences professor at the University of Jordan, said.
Rasmi Abdullah, a 47-year-old hunter, agrees. "The war has seriously affected people. Fearing violence will reach Jordan, they feel the need to buy guns for self-defense," said Abdullah.

The number of licensed weapons is officially around 120,000 but there are reports of more than 1 million unlicensed guns in the kingdom of only 7 million people, according to estimates from the interior ministry. "There are 95 licensed gun shops in Jordan but it is difficult to determine the number of other arm dealers, particularly with the current high level of smuggling," a security official said. And with the demand comes high prices. A Belgian made 9mm "Browning" pistol is selling at $2,540 presently while a Spanish "Star" 9mm will fetch $2,800.

Just a few weeks ago security officials intercepted a smuggling operation involving 900 arms -heavy and light- coming from Syria and being transported to Saudi Arabia. Officials in Jordan say that arms smuggling has risen 300 percent in recent months and if arms can be smuggled from Syria to KSA, and intercepted in Jordan, then it is hardly surprising if those same weapons are absorbed into Jordan's thriving black market in firearms, giving both Washington and Brussels more bang for their buck with their key ally.