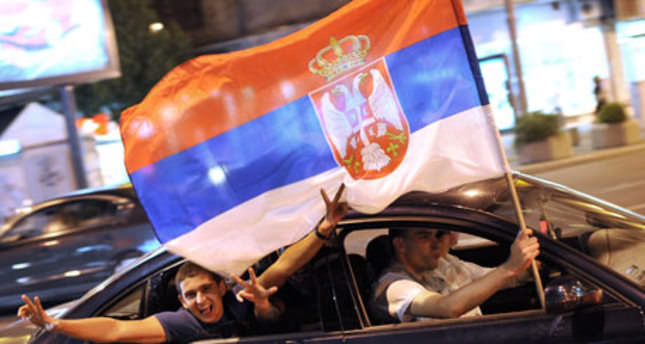 by Nedim Emin Mar 06, 2014 12:00 am
The recent resignation of Serbia's economy minister, Sasa Radulovic, caused shock waves throughout the country.

More shocking, though, was that his resignation led to state resignation. When Radulovic resigned, claiming that the government failed to support him in privatization measures and the enforcement of social reforms, the cracks began to show.

Radulovic urged both Prime Minister Dacic and de facto leader Aleksandar Vucic to make different calculations. The decision to go to an early election will impact Serbia's political balance in many ways. Rumors of Radulovic's plans to establish a political party are the first signs of tensions in the state.

However, it seems quite difficult for Radulovic, a victim of government push-back against unions and privatization opponents, to get a response from politics. The state resignation and decision for an early election has clearly revealed for the first time ever that Vucicmay be the only man for Serbia.

Backing the resignation of the state immediately after the crisis, and subsequently going to early elections, is an indication that Vucic will make the most of this opportunity.

The civil resistance towards normalizing affairs with Kosovo -Vucic'sgreatest test in gaining EU acceptance- does not scare the pro-European leader. He has reason to be confident that his charisma will see him through, despite making risky decisions on behalf of his country.

SNS agreed to relinquish the position of prime minister to SPS -which only received 14 percent of the vote - in order to eliminate the democrats, who raked in 22 percent. Now it's time to re-deal the cards.

With his reputation on the rise as the most effective political actor in the country, it is surprising that Vucic even waited so long to go to an early election. The nationalist and pro-change leader preferred to wait and become stronger before going to elections, to prove his rising leadership and charisma.

Once the government was established, Vucic took bold steps against corruption -an obstacle to foreign investments. Immediately after, he played an effective role in drawing investments from Qatar and other countries to Serbia.

The people of Serbia, who became fed up with the country's economic woes after many years of war, were particularly interested in Vucic's moves.

Normally, these developments would be to the advantage of the Democratic Party of Serbia's (DPS) leader, Ivica Dacic, but instead Vucic managed to spin it for his own political advantage.

Dacic pulled the short end of the stick when he shared responsibility in matters such as negotiations with Kosovo and the EU reform process, issues that otherwise would have damaged Vucic's image had he been on his own. In the meantime, Vucic began to take control of Serbia's intelligence services.

Taking all this into account, the early elections leave no doubt as to who will be the new prime minister of Serbia. It is almost certain that Aleksandar Vucic's SNS will take the lead in the March 16 election.

Yet, the distribution of votes among opposition parties is what really counts. A drop in votes for the democrats SPS is going to make it easier for Vucic to establish his single-party rule.

If these two parties receive more votes than expected, the Social Democratic Party of Serbia (SDPS), led by Rasim Ljajic, may be a small but significant party bringing leadership to Vucic.

The possibility of increased power for the SNS leader after the elections is stirring some fear in Serbian public opinion. That said, we should not underestimate the number of people in Serbia who believe the country needs a powerful leader to achieve stability.