The Paradox of Stability 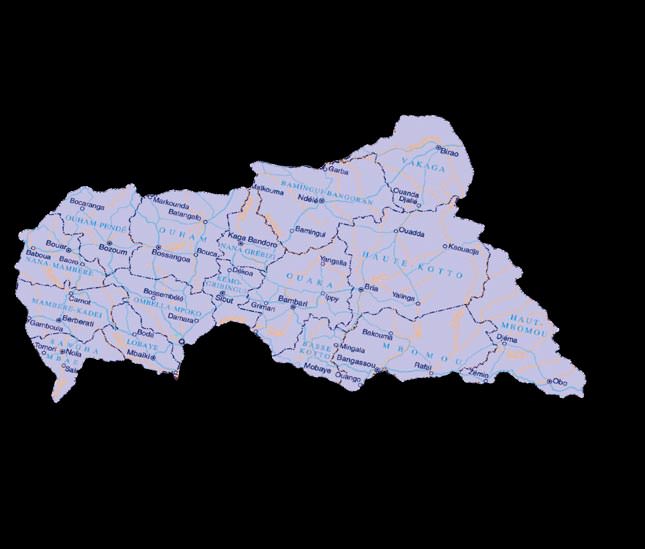 New rising economic powers, such as China, India, Indonesia and Malaysia, are also taking note of the obstacles in their way of investing in the CAR and they will not stop at vying for the resources as their economies grow and European economies stagnate

At no time since the Rwandan genocide has the international community been challenged by a crisis that so closely mirrors the horrors of the earliest days of the ethnic cleansing campaign between the Hutu and Tutsi that left close to 1 million people dead. Almost 20 years later, the quickly unfolding violence in the Central African Republic stokes fears of years past. At a press conference in Geneva, John Ging, United Nations director for the Office for Coordination of Humanitarian Affairs (OCHA) said, "The elements are there, the seeds are there, for genocide. It has all the elements that we have seen elsewhere, in places like Rwanda and Bosnia."

The latest round of violence carried out by majority-Christian militias near the CAR's southeastern capital city Bangui has prevented the evacuation of Muslims. The human rights advocacy group, Amnesty International, has reported that the streets of the capital city are filled with rotting bodies of slain Muslims despite the presence of thousands of French and African peacekeepers on the ground. The U.N. reports that the fighting has displaced 1 million people and killed over 2,000, while thousands of others remain missing.

Often neglected in the ongoing discussion over sectarian violence in the CAR are whether the origins of the conflict are religiously fueled and what if any other factors may play a role. Unlike Rwanda, the Christian and Muslim populations of the CAR lived in relative peace until 2003 when former president, Francois Bozize, came to power. In order to overthrow then President Ange-Feliz Patisse in a military coup, Bozize sought the aid of the majority Muslim rebel group from the north, the Seleka, in what ended up being a two-year battle for control.

When Bozize finally came to power the Seleka anticipated a change in the plight of their tribes, which consisted of mainly pastoral tribes in the north. It is a region that has historically been neglected since French colonial rule. After coming to power he backtracked on his promise to develop the north and instead took every measure to ensure they would not become a threat to his power base. These tribes languished under his rule while the southern regions grew increasingly developed. In addition to not receiving the development they were promised, the northern tribes were further met with institutionalized discrimination in schools and jobs.

Most of the CAR's Muslim population lives in the far north and makes up about 15 percent of the population. The north is considered the least developed region in an already struggling nation, with a severe lack of roads, schools and hospitals. What has been a historic struggle for resources by northern tribes has now become a situation that Amnesty International describes as "ethnic cleansing." Donatella Rovera of Amnesty International said that "the Muslim population is being targeted [and] forced to leave the country," adding that human rights organizations assert ethnic cleansing has already occurred because the "stated objective is to get the Muslim population out of the country."

Violence in the CAR is now being characterized as religiously charged following the recent overthrow of the President, Michael Djotodia, and the rest of the Seleka government in January 2014. The Seleka ousted Bozize in March 2013 and carried out major atrocities as they tried to amass power during their 10-month rule. Bozize funded the formation of militias to overthrow the Seleka once he fled with his family to the Democratic Republic of Congo. The organized violence carried out by the Seleka against the southern tribes also led many to join the Christian majority self-defense militias, known as "Anti-Balaka," which means anti-machete in the local Sango language.

Beyond the civil unrest, the role of foreign interests in supporting a vacuous state of government affairs cannot be discounted. The international community, rather international investors, has maximized profiteering off of a nation that is economically poor but resource-rich in petroleum, uranium, gold, diamonds and timber.

Since the CAR gained independence from France in 1960, it has been embroiled in a state of constant civil war and has lacked two critical components necessary for nation building: political stability and economic growth. Economic growth not only for the negligible minority of CAR elite aligned with European financial interests but economic growth laying the framework for the nation to have the necessities of social mobility. The lack of infrastructure, roads, communication networks and access to electrical supplies has kept the CAR in a perpetual state of dependence on multinational investments and nongovernmental organizations to maintain a minimal state of survival.

Despite the normalized political culture of the coup for presidential succession, many former CAR heads of state aimed toward greater economic autonomy from former colonizers. However, when they expressed their desire to re-examine their international contracts they lacked the authority via the national banking system. Constant political upheaval has created an environment that makes it easy for international investors to dictate their terms of business to the CAR but they also remain fearful of the chaos tipping out of their control. There is a steady flow of chaos that allows for optimal investment profiteering but not enough stability for people to actualize their growth as a nation.

The Centre for Research on Globalization reports that the currency of all Economic Community of Central African States (ECCAS), of 14 former French colonies in West Africa, is printed under the supervision of the French National Bank and is issued by the region's central bank the Bank of Central African States which France has veto power over. While foreign currency reserves, including gold, are subject to deposition in the central bank of France. These 14 countries have their currencies linked to the Euro and are guaranteed by Banque de France, making it a major manipulation by the French government of vulnerable Africans. Therefore, the very sources of wealth have bound the people to debt and dangerous labor practices.

French involvement in the conflict is also shaped by what, according to a report by Reuters, is France's largest commercial interest in a former colony: the French multinational nuclear company, Areva. Chatham House, a London think tank, noted: "France wields a level of influence in sub-Saharan Africa that it cannot command anywhere else in the world...it is an important market for French logistics, service, telecoms and infrastructure companies." The deeprooted French role in the economic decision-making of the CAR has strangled economic growth prospects of the nation as well as their ability to decide which international contracts they decide to pursue and those they chose not to.

China's rapidly growing diplomatic experience in the continent shows that they have adapted a flexible approach to relations on the resource-rich continent. Last year when the French militarily intervened in Mali, Chinese physicians (originally stationed there to prevent malaria) removed bullets from victims of the war. This soft power approach not directed to the old guard elite but directly to the people will begin to unravel the entrenched imperial power networks and shift the tide in the way diplomacy is maneuvered. China's lead in developing strategic diplomatic approaches in its many relations on the continent indicate that the new rising world economies are not looking for temporary fixes to maintain a status quo of instability rather a desire to secure resources with greater certainty and consistency. The international community's gross negligence during the Rwandan genocide cannot be the modus operandi for the rapidly unfurling crisis in the CAR. International actors most equipped to immediately respond in the situation will claim key stakeholder status in the changing tides of influence and business on the continent.