How will nationalist voters react to Dec 17? 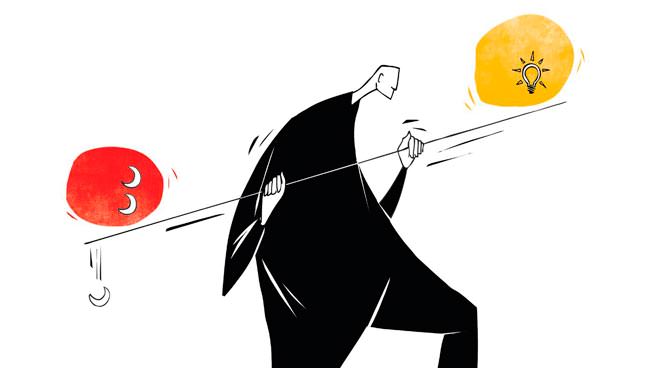 Identifying the Dec. 17 operation as an attack against the AK Party government by the Gülen Movement, conservative voters are likely to rally behind the Turkish prime minister in upcoming local elections. Consequently, the controversy might increase the ruling party's popularity among its core constituencies

Observers from all political backgrounds agree that the developments that dominated the public debate in Turkey since Dec. 17, 2013, represent both a criminal case and a political operation. While the courts continue to deal with the controversy's judicial implications, public opinion and the media concentrate on the operation's political motivations and its covert connections.

First and foremost, the majority of Turkey's population identifies the Dec. 17 process as an attempt to establish a new bureaucratic guardianship over civilian politics.

Regardless of what we call the power circles - some prefer "parallel" or "deep" state - behind the most recent attacks against the government, there is no doubt that we are faced with a complex organization whose game plan involves planned steps from law enforcement and the judiciary among other key government institutions.

Another reason why public debate revolves around the Dec. 17 operation's political implications at the expense of the corruption allegations has been the Gülen Movement's unmistakable efforts to prevent the elected government from running the country and to target the administration's legitimacy as a self-proclaimed, unelected authority. Most recently, a list of 7,000 journalists, intellectuals and political activists revealed on Feb. 24 attested to the scope and depth of the Gülenist witch hunt that currently manifests itself in a series of leaked phone calls.

Despite such grave developments, we must nonetheless focus our attention on the question that matters most: Does the Gülen Movement's crusade against Recep Tayyip Erdoğan's government appeal to the general public?

Polling data released by various companies since Dec. 17 indicate that the AK Party has either maintained its previous level of support or lost two to three percentage points. In other words, it would appear that major political developments such as last summer's Gezi Park protests and the most recent operation have only a minor effect on the ruling party's electoral support. As such, polling data indicates that the voters do not regard the opposition parties as meaningful alternatives to the AK Party despite major challenges to the latter's rule in recent months. Interestingly enough, the Nationalist Movement Party (MHP) that competes with the AK Party over conservative and nationalist voters in the Anatolian countryside also failed to capitalize on perceived weaknesses of the ruling party. At least three structural factors would help explain this peculiar phenomenon.

Primarily, the AK Party successfully moved away from countryside conservatism - which it shares with the MHP - at the national level especially since the 2007 elections. Such differentiation in national politics significantly weakened the MHP's potential as a competitor. Let us elaborate:

Since the 2007 parliamentary elections, the government challenged the traditional balance of power between civilian politics and the military establishment. In addition, it made significant progress toward the Kurdish question's peaceful resolution and sought to develop a new type of foreign policy that would involve Turkey more directly in regional and global affairs. Such efforts effectively left nationalist voters, whose numbers have regularly declined over the same period, confused about the ruling party. In contrast, the same reformist policies received a heartfelt welcome from AK Party voters in the same areas where conservatives rewarded the government for shouldering the political risk of tackling the country's chronic problems. In other words, the Erdoğan administration's ability to portray itself as a problem solver overweighed the nationalist sentiment that the ruling party compromised its conservative values for political gain. In this sense, nationalist constituents in the Anatolian countryside are likely to identify the Dec. 17 operation as an attack against the AK Party government and - by extension- against their political demands and representatives. The MHP leadership's decision to side with the extra-parliamentary Gülen Movement (which resembles the main opposition's historic alliance with the military establishment) over the past months, therefore, significantly limits the party's appeal as a meaningful alternative to Erdoğan's government.

Another structural factor seems to operate at the local level. Historically, local politics across the nation tends to paradoxically reflect the national balance of power - a reflection of the country's strongly centralized administration. In this regard, the central government in Ankara tends to exercise considerable control over local issues such as municipal finances, redistricting and public works. And while the AK Party attracts voters from around the country, there is little doubt that its core constituencies reside in small towns in central and eastern Anatolia.

As such, the ruling party won approximately eight points above the national average in places like Çankırı, Çorum, Yozgat, Kayseri, Konya, Nevşehir and Aksaray where a significant portion of conservative-nationalist voters supported the AK Party at the expense of the nationalists. (It is important to recall that a government-sponsored 2010 constitutional referendum passed with 58 percent that pointed to the same shift from the MHP to the ruling party.) In this sense, the conservative values of the two parties shared, work to the AK Party's advantage even though the first structural factor (i.e. reformist government policies) tended to push key constituencies toward the nationalist opposition.

Speaking in practical terms, the average small-town conservative in central Anatolia would understandably opt for the AK Party - which controls 11 provincial municipalities while the MHP has none - as part of their efforts to achieve greater influence in the area without antagonizing similar-minded individuals around them. Furthermore, economic interests would help explain the government's popularity in conservative strongholds like Kayseri whose local economy experienced rapid growth over the past decade thanks to rising exports and economic growth under AK Party rule. The availability of additional public funds for welfare expenditures, in turn, encouraged many conservatives to assume more active roles in local government by becoming members of the ruling party and supporting its activities.
Considering the influence of key structural factors on the AK Party's electoral achievements and popularity in central and eastern Anatolia, a decline in the ruling party's votes in its heartland remains unlikely. If anything, the Gülen Movement's attacks against the government might have a reverse effect on conservative voters and boost the party's support in this part of the country. Significant improvements to the majority's socio-economic status over the past decade would also support the view that the AK Party will not lose votes over the ongoing controversy, which the general population regards as a power struggle between state elites with little influence on the average citizen's life.
* PhD Candidate, Galatasaray University