Germany at a crossroads 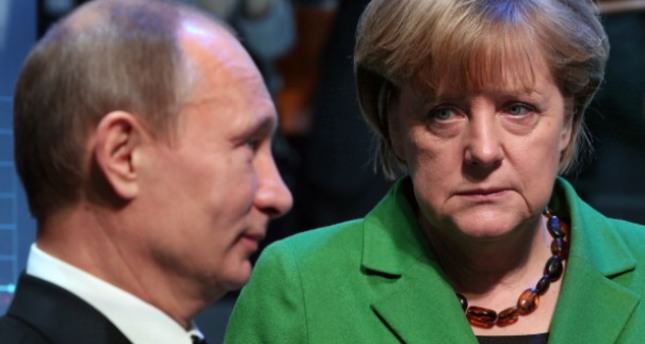 by Baha Erbaş Mar 11, 2014 12:00 am
This was the first time since the Cold War's end that the country changed its position at the center of Europe's critical balance, as if revisiting its hidden agenda over two decades later. Germany's changing priorities will entail major repercussions for Turkey's EU accession and the Union's general behavioral patterns including Russia's place in the European balance of powers. As an economic powerhouse, Germany is now faced with a decision whose consequences it still contemplates.

In recent days, Berlin reacted to the developments in Ukraine - also vital for Turkey - in an unconventional and stern manner. The Merkel administration's open challenge to Vladimir Putin's Russia represented a clear sign that Germany is gradually moving to a point where it will have to make a decision or simply reset. Surely enough, a surprising move from Germany regarding Turkey's EU membership would mark yet another strong indicator of such transformation.

This historic transformation might result in a new strategy for Germany and give up its objections to Turkey's EU membership. Berlin believes that Turkey would form ally with Britain in the anti-German front. Moreover, a stronger U.S. influence in Europe would challenge the balance of power while shifting the Union's center of gravity. From a German standpoint, Ankara remains an important player and a gateway to emerging markets that must be kept under control and outside the EU.

Germany is Turkey's leading trading partner on a global scale. The bilateral trade volume reaches $35-40 billion per year. Keeping in mind that trade volume was a meager $12 billion only a decade ago, the two countries seem to have made significant progress since.

Meanwhile, Germany recently lost its title as the world's largest exporter to China even though export-oriented growth remains vital to Berlin's plans. Meanwhile, the large Turkish diaspora in Germany gives Ankara considerable soft power even though their voices are seldom heard in Germany, where the government repressed the Turkish population - then known as guest workers - living in the country.

Moreover, Germany imports 93 percent of its natural gas from Russia, a vast source of cheap labor for a total of 4,600 German enterprises. More significantly, Russia - currently Germany's largest trading partner with approximately 40 billion euros - represents a stepping stone to the Caucasus, the Caspian, Central Asia and Iran. In bilateral relations, energy remains Russia's most important trump card while German capital and technology might prove more relevant in the long run. In the end, by supporting Russia with technology and capital, Germany is only postponing Russia's demise. But in any case, Russian-German relations are crucial for world peace.

Lord Ismay once said that the NATO was established "to keep the Russians out, the Americans in and the Germans down." For the Atlantic world, keeping Europe safe from the USSR required a military alliance (i.e. NATO) and a cultural-economic union like the EU to promote prosperity and defeat the Soviets in Eastern Europe. The general dynamic structure of German economy as well as strong work ethics made the country a driving force behind the Union. This way, the country could exploit the power of the Deutsche Mark where panzers failed during bloody world wars. This socio-economic structure served German interests as planned. The European country could only be forced to keep the peace and kept away from its ambitions in an order that would primarily bring prosperity to the nation and then to the whole of Western Europe within the framework of a mutual dependency. Nowadays both Germany and the rest of Europe are going through a critical period in history.

Germany pioneered the European effort throughout the Union's history. Today, the country has the power to keep the EU in the world stage even though the Union gradually goes into decline in diplomacy and economy. Merkel should be asking herself: "Which of these scenarios promises Germany a brighter future: An aging EU - without Turkey - gradually losing its economic dynamism or an EU that embraces Turkey with its young and thriving population, a country that is part of not only Europe, but also Asia, the Middle East, the Mediterranean and the Black Sea, and expected to become the second largest economy of Europe after Germany by 2050?"

The European Union's keystones for next century and Germany's global mission will be achieved through Germany's relations with Turkey and Russia, and their visions for the future of Europe - not through left-over imperial ambitions from the 20th century.