Time to remember responsibilities in the peace process 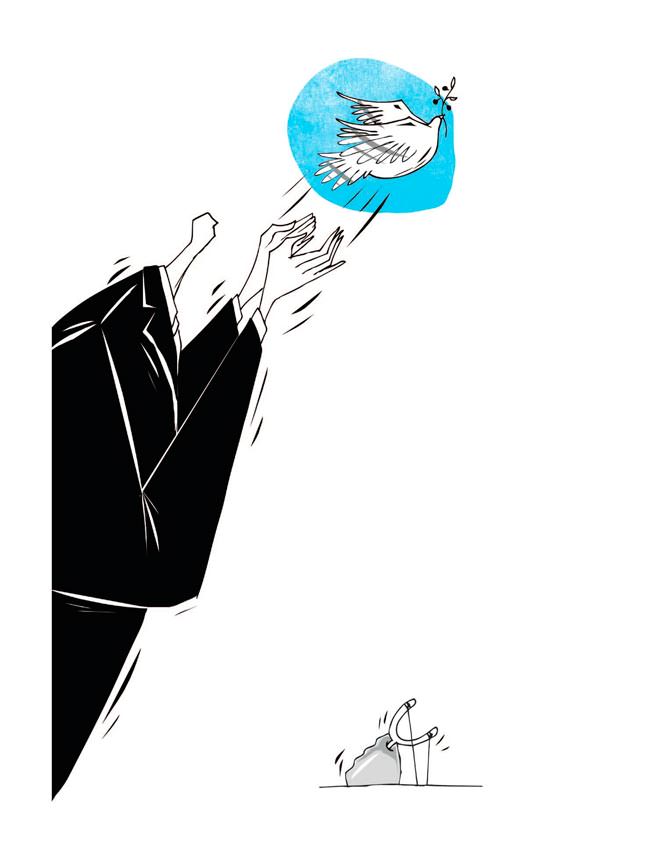 Despite various attempts to derail Turkey's peace process, the government and the Kurds have kept their eyes on the prize

Turkey was hit by a corruption probe on Dec. 17 that shook the political agenda. However, the probe has to be appraised with the following developments as the parameters of a grand plan: Another attempt on Dec. 25, operations on trailer trucks under the control of the National Intelligence Agency (MİT), wiretappings of Prime Minister Erdoğan and his family, and Abdullah Öcalan's montaged video recordings.

When these irrelevant pieces are montaged, one can easily claim that both the government's foreign policy and the ongoing peace process with the Kurds are in the line of fire. The peace process, Turkey's most significant political move that occurred at the beginning of 2013, led the country to experience a golden year in terms of the Kurdish issue. The Peace and Democracy Party (BDP) made a substantial contribution to the process. Therefore, BDP's relationship to recent developments should be considered in light of this information.

Indeed, it is not difficult to predict the impact of the Dec. 17 probe on the Kurdish issue in general and the peace process in particular: An end to the peace process and provocation of the PKK into taking up an armed struggle again. Bugün, the Gülen Movement's daily which functions as an official bulletin of the Dec. 17 probe, carries the declarations of Selehattin Demirtaş, co-leader of the BDP. Demirtaş' statements on democratic autonomy are expressed provocatively as BDP has engaged in deception and prepared for the separation that is a centuryold fear of the Turkish society. Hence, to what extent is this plan possible?

It is difficult to claim that leaked f o o t a g e from the interrogation of PKK leader Abdullah Öcalan after he was captured in 1999 had a direct effect on Kurdish society. Both Kurdish communities and the PKK discussed and evaluated Öcalan's strategy and road map regarding the resolution of the Kurdish issue after he was prisoned on İmralı Island. In other words, that chapter was already closed by the Kurds in 2004 after the detachment of some important figures from the PKK.

In truth, Öcalan's footage provides an opportunity for Turkish society to remember the 1990s approach to the Kurdish issue. This specific state mentality considered the Kurds' cultural, economic and political demands as a major threat to territorial integrity. Therefore, regardless of the government, this scheme took harsh measures that directly influenced everyday life and security of the Kurdish community. Each peace initiative was provocative during the 1990s. The aim of the recently released footage is no different to this. However, such manipulative attempts remain under the level of Kurdish political conscious.

It is not possible to disincline a political community from the peace that returned each provocation with a reduction in their basic rights. Accordingly, the Kurdish political movement determined its stance in the recent developments while being aware of the intention behind the footage.

Kurds are well aware of the fact that any power concentration within the state attempts to play their own game in undemocratic ways. BDP, holding the margin before the local election, took a political stance against the architects of the Dec. 17 probe. The choice is quite simple for the Kurds: stand with an illegal group whose position on the Kurdish issue is highly archaic in terms of recognizing influential Kurdish agents like Abdullah Öcalan and executives of the PKK, or choose the legitimate government as a partner for the resolution of the issue in which every actor in the Kurdish movement is in charge. It is even naive to think that there is an alternative for the Kurdish movement.

BDP accorded itself to the peace process after 2012, one of the bloodiest years of the infamous conflict, while wisely fending off criticism for the party's collaboration with the AK Party. The Kurdish political movement also removed armed struggle from its agenda and coordinated the process with shuttle diplomacy between İmralı Island and Kandil Mountain, where the PKK is based. In a nutshell, BDP apprehended the value of making politics and rectified the level of criticism in both the Gezi protests and the Dec. 17 probe. Having recognized the fact that depending on what extent it could articulate the thoughts and feelings of masses rather than addressing the streets, BDP backed the democratization of the country and the institution of politics. When the police and judiciary cooperated on operations and were unable to achieve their ultimate goal, the same groups concentrated on changing the perception while portraying Erdoğan as a dictator and Öcalan as vendor of the state. This clearly indicates that those operations target the peace process since those two figures stand as the guarantors of the process.

Turkey is passing through a bend in the road with polarization between the parties who perceive the zeitgeist with an appropriate formula to take Turkey further and one's insistence on status quo. The Kurdish people's longing for peace and Turkey's attained civil peace with a wealthier and democratic progress come into being with Öcalan and Erdoğan, who maintain their decent stance for the peace process.

What sparked the peace process was the awareness of the government about the impossibility of maintaining the status quo regarding the Kurdish issue and PKK's mare's nest with the armed struggle in order to reach its goals. In this regard, PKK leader Abdullah Öcalan came up with a master plan in which he does not claim an independent Kurdistan but rather the democratization of Turkey. He was able to persuade the acting leadership to come up with strategic changes that harmonize with the new circumstances.

In addition, BDP's election strategy is marketed in Gülen sponsored media as preliminary preparation for separation rather than a de-centralized attempt that is highly necessary for the democratization of the country.

The very thing that sparked the peaceful negotiations has the potential to become a threat to the process. Demirtaş's recent speeches and interviews with PKK executives show that the Kurdish movement appears to be prone to not showing the similar political sensitivity they showed during the Gezi protests and the Dec. 17 probe.

The latest developments in Turkey led to the centralization and personalization of politics. This led to questions and concerns regarding the process and whether it will continue or end. Past experiences such as the Habur incidence in 2009 and the bloody two years following PKK's infamous Silvan attack are still fresh. Moreover, election periods have always led to an escalation of the conflict. Therefore, the government should be clearer and bolder in its reform plans in order to ease tensions.

Inevitably, the current political atmosphere makes BDP skeptical about the future of the peace process. Nevertheless, BDP has to stand behind the process while concentrating on enlarging the subjects and the parties of the negotiation within the context of democratization of the country, rather than being skeptical of whether the government follows through with the negotiations or not. Also, on a regional level, BDP should accelerate the process of the long-awaited pan-Kurdish national conference; however, it seems that the rivalry between Barzani and Öcalan has left its mark on any further developments for the sake of the Kurdish people.

Although BDP criticizes the government for not taking urgent and necessary measures for the accomplishment of the peace process, they underestimate the steps taken by the government in its democratization package, decreasing long detention periods, and abolishing the notorious Specially Authorized Courts. Each step has been expressed by BDP executives as path cleaning measures. Furthermore, the Parliament passed laws as a move that could invigorate relations between Ankara and the Kurds. Despite the missing points, the package allows for education in private schools and political campaigning to be conducted in languages other than Turkish. It also allows former non-Turkish names of villages and neighborhoods to be reinstated. BDP claims that the new rules were already practiced among Kurds; however, there are still some cases pending against Kurdish politicians for greeting people in the Kurdish language during election campaigns.

It is worth mentioning that the AK Party, Öcalan, the Kurdish Communities Union (KCK) and the rest of the parties of the peace process stand where they were in early 2013. Although it is clear that Öcalan will not refer to recent developments as something other than a coup attempt, the BDP-PKK line should also accord their stance accordingly. This will lead to acceleration in the peace process that will sweep away the fictitious political agenda set on the wiretappings.

In an atmosphere where the Kurdish issue is interpreted as Turkey's most important political problem without the terror factor, the responsibility of the BDP is growing more than ever. The peace process reflects the will of resolution with its accurately designed political communication language. The BDP's responsible attitude in its stance against the political engineering venture and its election strategy will increase both Turkish and Kurdish support along with their common sense.