The search for renewal: An Analysis of CHP's Leadership, Top Echelon and Base 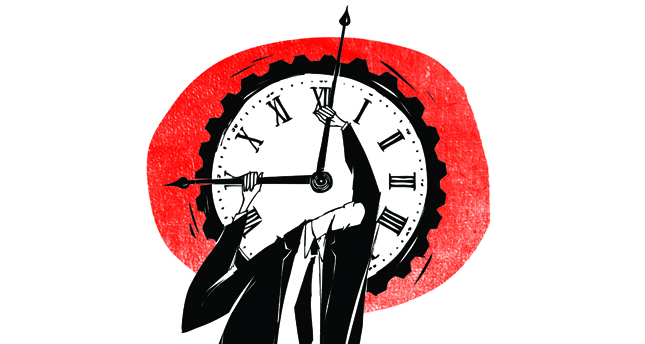 The results of 96 surveys showed that CHP supporters believe the flag, the nation and unitary structure are under threat and see the Kurdish issue as a source of concern

There exists a relationship of consent between political parties and voters in political systems that are dependent on competition. In order to compete, political parties must convince the voting public. This obligation creates a transitive situation between sociology and politics.
Political parties that remain indifferent to the sociology of their country stand no chance of coming into power.

The introduction of multi-party politics signified the Republican People's Party's (CHP) first steps toward renewal and an effort to harmonize itself with Turkey's sociology.

The CHP of the single party era was comprised of rank and file soldiers, civil servants and the intelligentsia. Both the CHP's particular construction as well as their unpopular policies further widened the gap between the party and the public. Thus, general elections from 1946 onward (especially 1950) resulted in the inevitable loss of the CHP against the Democrat Party (DP).

For the CHP during the 1950s, the notion of renewal or reinvention was a precautionary reaction to the loss of votes. In a similar fashion, the left-of-center of the 1960s, the democratic left of the 1970s, and the new left and Anatolian left of the post-1980s are attributed to the "new CHP" and all stem from a key goal: make the CHP a viable contender for power.

The search for renewal throughout the history of the CHP has been sought through conceptualizations that spin on two axes.

On the one hand, the public is to be courted and on the other hand the party has to assimilate the universal principals of social democracy. The entrenched belief that this double strategy will transform the CHP into a viable contender for power has marked the party's 90-year-long history.

It was at the suggestion of the Political Director of SETA, Dr. Hatem Ete, that I began my research into the renewal of the CHP. One of the final stages of this search occurred with Kemal Kılıçdaroğlu being chosen as chairman in 2010. Kılıçdaroğlu is of critical importance for the new CHP as he is representative of this pursuit for renewal. My work focuses on finding out what type of response Kılıçdaroğlu's new CHP will illicit from the party's top echelon as well as its base.

In order to understand the responses from the base and top supporters, we must first understand what Kılıçdaroğlu inferred by the concept of new CHP. With this aim, I analyzed the party's polices under Kılıçdaroğlu on contemporary issues such as the Kurdish issue, the Ergenekon and Balyoz (Sledgehammer) trials, secularism, the constitutional drafting process , and foreign policy. The importance of this research was to pinpoint the difference and mark the continuation between Deniz Baykal's CHP and Kılıçdaroğlu's CHP.

Baykal and Kılıçdaroğlu set forth different perspectives on the Kurdish issue, the new constitutional drafting process, secularism and the new CHP. Yet these differences should not be taken as absolute.

For example, when addressing the Kurdish issue they find common ground to oppose any kind of identity politics and their perspectives harbor a similar nationalistic view. It is important to note that Kılıçdaroğlu's idea of nationalism is more inclusive and egalitarian than Baykal's. Despite differences on fundamental issues, Baykal and Kılıçdaroğlu share similar beliefs on militarypolitical relations, judicial-political relations and foreign policy.

The Ergenekon and Sledgehammer trials represent an abrasive, lawless political process based on the division of powers and reckoning with the regime. The suspicion regarding the trials, especially the legal procedure, springs from this basis. The same is valid for judicial-political relations, because according to both, the AK Party has politicized and set out to capture the judiciary.

Lastly, Baykal and Kılıçdaroğlu view foreign policy under the AK Party era has having been unsuccessful because it goes against the "peace at home, peace in the world" principle as well as being incompatible with Turkey's interests.

While the top echelon of the CHP is able to unify on many issues, it is also equally able to differ harshly on other matters.

For instance, while almost all top-ranking members are in favor of peace, most do not believe that the Kurdish issue can be resolved through the Oslo or İmralı process. This duality can also be observed in the evaluations of the Ergenekon and Sledgehammer trials. The CHP elite, while being anti-coup, they are also against the judicial process in Silivri, the politicization of the judiciary, the eradication of law or its lack of justice, a sense of civil guardianship because they see it as the suppression of opposition. They are in agreement in their opposition to the presidential system. With the exceptions of B. Ayman Güler's thoughts on the coup in Egypt and Sezgin Tanrıkulu's views that the CHP should have a foreign policy in line with that of Socialist International, on the whole, the CHP elite has shared AK Party era views on foreign policy.

Contrary to the examples outlined above, there are key issues on which the CHP elite differ. While the elite all object to the way in which the Ergenekon and Sledgehammer trials are being handled, there are differing interpretations on the fundamental principals of the trials. For example, Hüseyin Aygün and Sezgin Tanrıkulu react from a different base when sharing their views with the public. This fracture can also be seen on the issues of mother tongue education and the definition of citizenship.

The CHP elite has differing views on the new CHP both in terms of terminology and content. While the new CHP is perceived by most as a reasonable strategy, there are those reformists in the party that bring genuine meaning to the concept.

In order to understand how these outlined themes impact the base of the CHP, we carried out 96 surveys in 10 provinces, with questions based on Kılıçdaroğlu's discourse.

It is important to note that these interviews are in no way representative of the entire CHP base and this work makes no such claim.
The results showed that the CHP base, just as its elite, displayed the same dialectic duality. While differing on everything from the Kurdish issue to the debate on citizenship and secularism, being CHP supporters was the commonality. CHP supporters view the following as under threat: the Republic, freedom, the flag, the nation, modern life, independence, democracy, the country, unitary structure, the regime and Atatürk's principles. Hence, other issues, from the Kurdish issue to the new CHP, are a source of worry. And yet, CHP supporters do not articulate these worries in a tangible manner, but rather in vague terms. For the CHP however, it is crucial to take precautionary measures toward these threats.

Even though recent events constitute a significant source of worry for many CHP supporters, a considerable portion acts on different ideological grounds from those of the party. For instance, CHP supporters feel obliged to display a more profreedom stance than the AK Party when it comes to the Kurdish issue. Similarly, for a significant number of CHP supporters it is unnecessary to include the term "Turkish" in the definition of citizenship. On military-political relations, contrary to the central stance, some CHP supporters approve of the Ergenekon and Balyoz trials. Finally, supporters have differences in their approach to the new CHP. For many, the new CHP has a negative meaning, yet supporters appreciate that Kılıçdaroğlu's term holds significant weight.

It is evident that concerns preoccupy the CHP. These concerns move the party closer to the past rather than the future.

The need to protect past victories from real or imagined threats appears to be more important than being a party with a future vision. This is the primary issue that prevents the CHP from becoming a viable political alternative. The CHP has taken on an identity of obstructing the solutions provided by others rather than providing solutions itself. Following a line of self-preservation is more important for the party than producing alternative policies.

The self-preservation arising from the deep-seated concerns can be seen in the CHP base as well as the leadership. Despite all this, the CHP aims for power. Kılıçdaroğlu was chosen as CHP chairman in an effort to revive the party after Baykal's era, and Kılıçdaroğlu still continues this cause. A key motivation for Kılıçdaroğlu is to broaden the appeal of the party by taking it to the public. This can be seen in its efforts to channel the energy that first appeared with Gezi, the stance it has taken between the Gülen Movement and Prime Minister Erdoğan, and the nominated candidates it has put forth for the March 30 local election.

When considering the history of the CHP and its attempts at renewal, it is evident that the desire to "go to the public" or the assimilation of the principals of social democracy as seen under Kılıçdaroğlu are nothing new. In this respect the Kılıçdaroğlu era, rather than bringing change, has continued the archaic tradition of remaining steadfast to Atatürk's principles.

The most widespread slogan of these local elections is indicative of this situation: "Great tree, new shoot. 90 years we stand together." However, despite everything, Kılıçdaroğlu remains in pursuit of and a representative of CHP renewal. Efforts to broaden the appeal of the party to youth, women and other sections of society ought to be noted as a distinguishing feature.