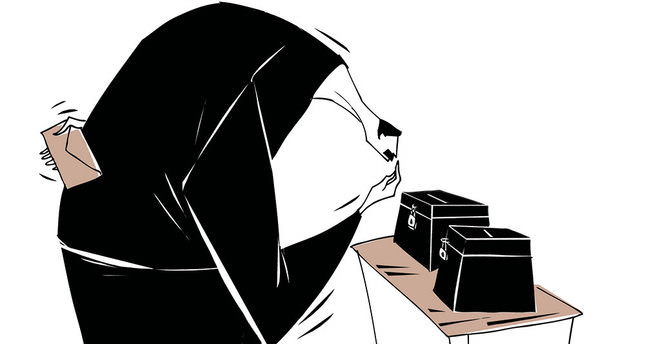 by Kurtuluş Tayiz Mar 19, 2014 12:00 am
Since 2002, election analyses have focused on two things in Turkey: differences in the number of votes between the party in power and the main opposition party and the number of votes parties with a connection to the Kurdish community receive, in addition to their success in local elections in the east and southeast. While the former is related to the political party that will govern the country, the latter is related to which party is going to dominate the Kurdish-majority region.

With only a few days left before the local elections, research conducted by reputable institutions frequently shows that the party in power is in the lead across Turkey. According to recent polls, the AK Party enjoys the support of 40 percent of the electorate whereas the Republican People's Party (CHP) can claim support below 30 percent. Most of this research shows the big picture, however they fall short of reflecting the intricacies of politics in the east and southeast.

In the last 12 years, the electoral contest in these regions has been almost exclusively between the AK Party and Peace and Democracy Party (BDP). The CHP, Nationalist Movement Party (MHP) and the other parties that do not have members in the Parliament have not been able to gain a strong following in the southeast for years and this is not expected to change in the March 30 local elections. However, who is going to win the contest between the BDP and AK Party is of great importance for Turkey. The BDP wants to legitimize their demand of "democratic autonomy" for the east and the southeast by eliminating the party in power. On the other hand the AK Party wants to prove that the BDP is not the only representative of the Kurds by preserving its top place.

It is not possible to analyze legal and recognized Kurdish parties without considering the emergence of the PKK. The PKK was founded before the '80s and the armed Kurdish insurgency they started in 1984 formed a new political sentiment. Legal Kurdish parties that emerged from this and operate today could not claim their independence from the PKK. The fact that the voter base is the same and ideological-political affinities, the PKK's physical interventions and their authority on the ground prevented independent political formations from developing, as well. This interaction makes it difficult to separate the journey of the legal Kurdish parties from the armed Kurdish opposition. That is why the results of the elections in the southeast are considered a good indicator of the success or failure of the PKK and are being watched closely. The separatist feature of the PKK, which is now the Kurdish Communities Union (KCK), causes the government to consider the election results as more "sensitive."

The election results of the last two decades show that legal Kurdish parties receive about 4 percent to 6 percent of the general votes throughout Turkey. While they cannot win more than eight provincial mayorships, they win over 100 county and town municipalities.

Collaborating with the Social Democratic People's Party - the center left party of the time - in the elections, Kurds sent 22 deputies to the Turkish Parliament in 1991. In the 1995 general and local elections, the Kurdish party of the time, HADEP, was not able to make it over the 10 percent threshold and won only 4.17 percent with 1,171,623 votes.

From 1995-1999, the HADEP was not able to participate in local and national government, however they managed to be relatively successful in the 1999 local and general elections.

In the simultaneous elections they won 37 mayorships, including seven provincial ones in Diyarbakır, Ağrı, Batman, Bingöl, Hakkari, Siirt and Van.

The results of the 2002 general elections were more promising for Kurdish parties.

The DEHAP increased its percentage of votes to 6.14 percent and their total votes to 1,933,680, having the highest rates of Kurdish parties. However, they experienced a real disappointment during the elections on March 28, 2004. The DEHAP received nearly 2 million votes two years ago but during the elections that decreased to 1.6 million, about 5.1 percent. The biggest failure for the DEHAP was the loss of four provincial municipalities (Siirt, Bingöl, Ağrı and Van) to the AK Party.

Retaining Diyarbakır, Batman and Hakkari and adding Şırnak and Tunceli mayorships next to them, the DEHAP won 64 provincial mayorships.

In the general elections on July 22, 2007, the DTP participated with independent candidates in order to cross the 10 percent threshold and they put up 58 candidates in 43 cities. They aimed to send 30 to 35 deputies to the Parliament but they were only able to send 22.

The DTP had 20 of the 119 deputies in the eastern and southeastern regions of the country, whereas the AK Party had 86, CHP had four and MHP had one. The DTP was not able to have their candidates chosen in Adana and Mersin, where they were assertive, yet they sent two names to the Parliament from the first and third areas of Istanbul. These numbers also show that apart from Istanbul, the Kurdish party was not able to garner significant support in cities in western Turkey.

The DTP participated in the March 29, 2009 local elections following the loss of four provincial mayorships to the AK Party and received 5.7 percent. They had eight cities, one of them being the metropolitan mayorship of Diyarbakır, 50 counties and 50 towns.

The BDP was founded in place of the DTP and they joined together to run in the general elections of July 12, 2011. In order to avoid the election threshold, they put up independent candidates from 44 cities. The candidates that the BDP supported received 5.9 percent (2,339,501) of the votes and sent 36 deputies to the Parliament. They had 30 deputies from the east and the southeast whereas the AK Party had 76.

The AK Party has remained popular in the east and the southeast since 2002. During the 2002 elections when the AK Party increased its percentages they got in the southeast from 28 percent to 53.14 percent and they displayed a consistent growth in the Eastern Anatolia with a percentage of 54.64 percent.

However, we need to keep in mind that the BDP objects to the fact that election results are evaluated under the classification of "the east and the southeast regions." They counter that in the cities where the Kurdish population is dominant, the BDP is the first party and that the AK Party just received the votes of the non-Kurdish population in the region.

The BDP put up 300 candidates from cities, counties and towns for the March 30 local elections and they are aiming to break the AK Party's dominance in the east and the southeast and to be the first party instead. Their goal is to raise their voting total by putting up senior names of Kurdish politicians in Diyarbakır, Şanlıurfa, Mardin and Ağrı. In the 2009 local elections the BDP won in eight cities, 50 counties and 40 towns and they want to add some more to this list. It is almost certain that they are going to win the Mardin mayorship. Ağrı is also considered a possibility.

It seems hard for them to get more than 10 provincial mayorships. However, it would not be a surprise if they managed to get over 100 county and town mayorships.

In Turkey, the current political crisis has led many to view the upcoming local elections much like they would general elections.

The AK Party seems to have founded their election strategy on preserving the vote percentage that they had in the previous elections throughout the Turkey. They aim to get the highest votes in the east and the southeast by putting up popular names as candidates.

The biggest trump card the AK Party can play ahead of the March 30 elections is "the Reconciliation Process." The most affected region from the 30-year conflict with the PKK is the eastern and the southeastern parts of Turkey.

The AK Party started the "Reconciliation Process" late in 2012, which subsequently brought peace to the region. The PKK sent their armed subjects over the borders and life is now back to normal in these regions.

The AK Party is going to the voters in the east and the southeast as the peace-bringing party.

The reconciliation process is the base of AK Party's election campaign in these regions.

Prime Minister Recep Tayyip Erdoğan keeps on talking about the reconciliation process at his election rallies. As the peace-bringing party, it does not seem likely that the AK Party will decline in the east and the southeast.

On the contrary, it is anticipated that they will increase their votes.

It should be noted that in the March 30 local elections, there will be two parties participating that did not emerge from the PKK or BDP tradition. These are the Rights and Liberties Party (Hak-Par) and the Free Cause Party (Hüda-Par) which was founded during the 90s and is considered to be the continuation of the Kurdish Hezbollah. Kemal Burkay, having returned to Turkey in 2011 after being exiled for 31 years, is leading the Hak-Par, which was founded in 2002 in Diyarbakır.

Burkay was also the secretary-general of the Kurdistan Socialist Party that was founded in the 1970s. Hak-Par has limited support and it would be considered a surprise if they win local positions.

Even though the roots of Hüda-Par, which are seen as a rival of the BDP and AK Party in the east and the southeast, are linked to Hezbollah these claims are rejected by the party.

The base of the party generally includes conservative Kurds. It is obvious that Hüda-Par has a base in the east and the southeast. Hüda-Par is running candidates in 13 provincial and 72 county mayorships. When we look at this election map, one can see that Hüda-Par is running a campaign over a limited geographic area. Hüda-Par is trying to focus their energy on limited cities and their success depends on the votes they will take from the BDP and AK Party. That is why the local elections will not be a smooth one.

After the March 30 elections, Hüda-Par is aiming to be the third-largest party in the east and the southeast after the AK Party and BDP, and wants to enter into the fray of Turkish politics as the new political actor of the region. Turkey will find out soon enough to what extent they can accomplish this on the night of March 30.