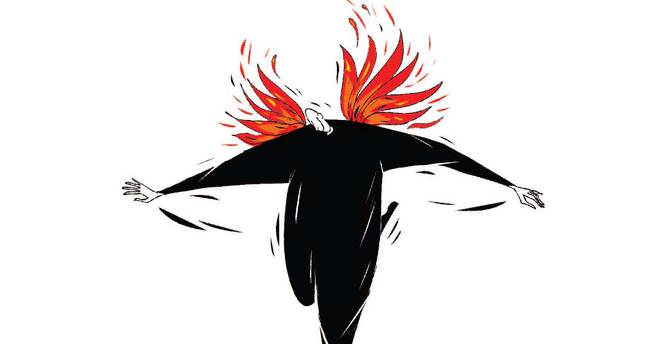 by Yunus Akbaba Mar 31, 2014 12:00 am
In order to find a peaceful solution to the Kurdish question, the Turkish government made its most important political move last year and entered into direct negotiations with Abdullah Öcalan, the PKK leader serving a life sentence. For the 2013 Nevruz celebration, a letter from Öcalan was read out to the public in which he declared the end of the armed struggle and the beginning of a new political era. The PKK responded positively to this call and declared a ceasefire.

The PKK then began withdrawing from Turkish territory to its bases in Qandil in Iraqi Kurdistan. Internal developments in Turkey, particularly the Gezi Park protests, pushed the peace process into the background. As a result, the PKK declared the suspension of its withdrawal, claiming a lack of reforms and progress in the talks. Consequently, nearly 70 percent of PKK members remain in Turkish territory. Nevertheless, Turkey does not find itself in a deadlock thanks to the new atmosphere brought on by Öcalan's 2014 Nevruz message and the government's commitment to the process.

On March 21, Öcalan's letter regarding the ongoing peace process was read aloud to millions of people in order to shed light on the Kurdish position in the negotiations.

Before mentioning the headlines of the speech, we should remember the very motives that launched the process. What sparked the peace process was the government's realization that both internally and externally the status quo of the Kurdish issue and the PKK's mare's nest with the armed struggle in order to reach its goals were unsustainable. To this end, Abdullah Öcalan came up with a master plan in which he does not seek an independent Kurdistan but rather the democratization of Turkey.

The public responded to this move with mass support and internalization of the process. No other attempt has provoked such a level of confidence. However, recent developments and the atmosphere surrounding the March 30 local elections led to political turbulence. In this regard, the PKK made declarations severely criticizing the AK Party.

Indeed, the PKK used this declaration to convey a message to Öcalan. There is distinction between Öcalan and the PKK, especially in terms of interpretation of the recent developments which Öcalan considered a coup attempt and the PKK termed a power struggle.

Öcalan's message is principally addressed to the actors of the process, with a special emphasis on the irreversible nature of the process.

Öcalan attempted to meet the expectations of the PKK with mindful wording to affirm that he will not jeopardize the peace process.

Remaining consistent with this stand, Öcalan asked the Turkish Parliament to pass a law ensuring that the negotiations are based on legal procedures. For the recent developments, Öcalan proposed mechanisms for a democratic and constitutional regime that may be obtained through democratic reforms against the coup attempts. In this way Öcalan negated PKK arguments about the interpretation of the AK Party-Gülen Movement struggle. He also warned those involved in the peace process to be careful in their critique of the process.

Regarding the government, Öcalan asked it to be clearer and bolder in the reform plans while setting the legal status of the negotiations.

He requested that the government take steps to reformulate the road-map and ease the process to also reduce general political tension.

The plan to send a group of journalist and opinion shapers to İmralı will bring fresh motivation to the process. When we compare Öcalan's speech with other speeches like that of Cemil Bayık and Peace and Democracy Party (BDP) executives, we realize that although Öcalan is eager to position himself as a negotiator in the peace process, the PKK-BDP line remains in the political sphere with harsh critique. As such, Ocalan's tone is much more moderate and positive compared to the PKK-BDP line.

On the other hand, it is also possible to read Cemil Bayık's speech via webcam as normalization and demilitarization of the PKK.

While doing so, Öcalan does not allow any room for his position as leader of the movement to be challenged. Hypercriticism of the government by the PKK and BDP also has to be appraised.

Lastly, one of the most important characteristics of the Nevruz celebration was the Kurdistan theme. In every single speech, Rojava and the contemporary successes of the Democratic Union Party - Syria (PYD), a sub-branch of the Kurdistan Communities Union (KCK), were saluted.

On the platform it was written "The revolution in Rojava is a revolution of the Middle East" and a delegation from the three autonomous Rojava cantons received a standing ovation from the public. It clearly shows that the 2014 Nevruz celebrations signified a call for a common policy for the Kurds of four different countries.

In an atmosphere where the Kurdish issue is interpreted as Turkey's most important political problem aside from terror, the position and responsibility of both the government and the Kurdish political movement is growing. The Nevruz celebration clearly signifies a break from the established structure in Turkey, yet only if it is pursued by a careful master plan by actors of the peace process.