Secret agreement between the Ottomans and Crimea 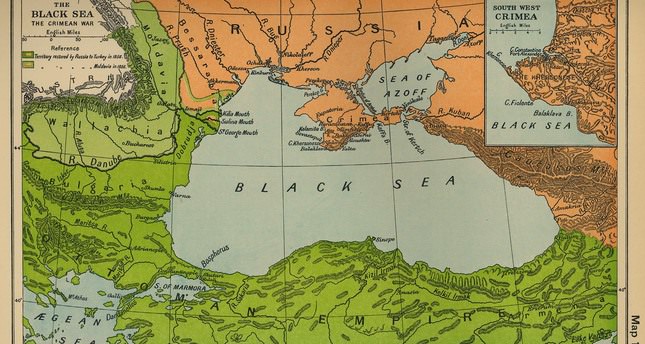 by Cüneyd Er Apr 03, 2014 12:00 am
Crimea, the hot topic currently occupying the world agenda, has a little-known but important role in the history of Turkey involving a bilateral secret agreement.

It is not known whether a copy remains in secret archives.

Osman I, the founding father of the state's descendants, had expanded the country through conquest.

Just after the fall of Constantinople in 1453, Sultan Mehmed II received a call for help from Crimea, which at that time was weakened due to power struggles for control of the throne. The request for aid from leading names of Crimea was an opportunity not to be missed for the Sultan who was aiming at total control of the Black Sea. The Ottoman Army, commanded by Gedik Ahmed Pasha fought against the Venetians and Genoese forces as well as the Principality of Theodoro. He was able to capture castles in 1475 and turned the territory into a "sanjak," an administrative division of the Ottoman State. After enthroning Mengli Giray as the Khan of Crimea, the peninsula was recognized under Ottoman suzerainty.

The Crimean Khanate was a Turkic Muslim emirate with special status under the administration of the Giray dynasty through the suzerain authority of Istanbul. Crimean Tatars were responsible for protecting maritime commerce in the Black Sea, the safety of Turkish Straits, and even security in Eastern Europe. Similarly, Crimea was under the protection of the Ottomans from any kind of danger that may befall them. As European historians highlight, the Crimean Khanate was more than an ordinary vassal state. Apart from other tasks, the Crimean light cavalries were also a source of indispensable support for Ottoman campaigns right along with the Ottomans' own cavalry forces. Consequently, Crimea was one of the primary elements of the Ottoman State.

Within the framework of such good relations, the two dynasties had reached a little-known agreement.

According to this secret agreement, in a similar way of providing said mutual geographical security, both dynasties agreed to guarantee the other's continuity, especially if ever Ottomans became extinct. In the event that either party faced problems that endangered the continuity of the dynasty, such as severe health issues or intra-dynasty fights, the Crimean Dynasty, the House of Giray would take over the administration of Turkey. As a Muslim and Turkic family, the House of Giray was also regarded the second dynasty family of Ottoman Turkey after the ruling House of Osman.

The course of history and a worsening relationship, highlighted by the case of the 1683 Siege of Vienna between the parties, did not allow for the implementation of the above-mentioned agreement.

The Ottoman forces were very close to conquering the city. While a district-size region was the only remaining part to seize, Crimean Khan Murat Giray could not or did not block the forces of Lechia's (modern day Poland) John III Sobieski, causing deep disappointment among the Ottomans.

Due to Russia's leverage during Ottoman Turkey's stagnation period, the Crimean Khanate gained its independence with the Treaty of Kuchuk Kainarji that ended the Russo-Turkish War of 1768-1774. It was the end of a 300-year relationship. In 1783, with a move quite similar to today, Russia annexed Crimea.

With the occupation and plundering (including the storming of libraries and archives) of Bakhchysarai and Akmescit (Simferopol), it was obvious that they were seeking revenge against Crimean Tatars who had posed a problem for them for decades.

On May 18, 1944, Stalin decided on a forced emigration of the Crimean Tatar people, accusing the whole population of being Nazi collaborators.

They were told to assemble in the squares of their villages, townships or cities and ordered to leave their homes in 10 minutes without taking any belongings.

All were piled up on railway cars that were typically used for animal transportation. Those who disobeyed the emigration decision were killed on the very spot. The train cars took the Crimean Tatars to Siberia and then deported them en masse to several territories in Central Asia. By the time they arrived at their relevant destinations, almost half of the exiled population had passed away.

Today, Crimea is a territory mostly absent of its native peoples. Only a small population of Crimean Tatars found the opportunity to return to their homeland after the collapse of the USSR. It is a known fact that the bulk of the current population is Russians who were settled after the forced deportation and emigration of the native Turkic people of Tatars. Under this demographic structure, the outcome of the recent referendum is hardly a surprise.

Taking into account the above-mentioned information, it may also be hard to consider the region within the right to self-determination.

Looking forward, the ongoing developments and the fait accompli of the referendum in Crimea may spark a domino effect in some sensitive countries in the Black Sea region in the near future.

* Cüneyd Er, LL.M. is a Turkish lawyer and a PhD candidate at Leiden University's faculty of law in the Netherlands. Mr. Er can be reached and followed at cuneyder@gmail.com and @cuneyder