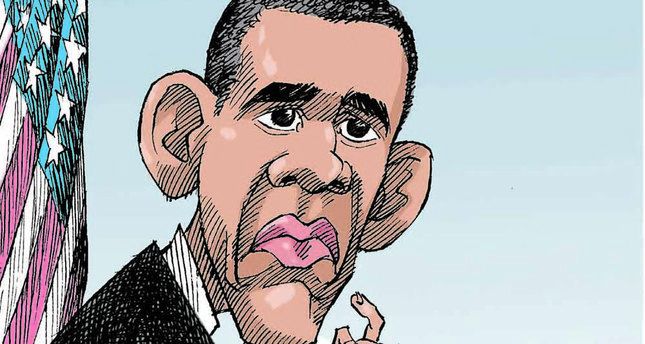 The Syrian war machine is advancing toward Turkey's southern border. But Obama still has a chance to write his own history

Winston Churchill once quipped at the end of his career that history would be kind to him "as I will write it" just before embarking on producing the autobiographical tomes of his life. Is it the same of U.S. Presidents in their last term? Can we ever expect U.S. President Barack Obama to grasp the nettle in Syria and take action, knowing that history will not necessarily be kind to him? Letting Syria fall into the abyss might also haunt Obama much like the WMD debacle of Iraq which overshadowed U.K. Prime Minister Tony Blair's legacy after leaving office. The milestones must be hard on him though. Some 150,000 are dead so far as the war enters its fourth year and one million refugees have fled to Lebanon alone.

But something's happening here. The last time that you could cut the atmosphere in this region with a butter knife was in the summer of last year when Obama pondered carrying out a massive air strike on Syria's military assets, following a chemical weapons attack in Damascus. That was a pivotal moment which Obama fluffed and, as a consequence, few, if any of the war pundits would argue led to what we are witnessing now in Syria.

Assad is winning the war. Let's not steer around a lucid reality which is staring us in the face. Just in the last few weeks we have seen a series of oddities which can only lead us to this assumption. The creation of a state space agency, a new commercial airline launched and the announcement from Russia that even more arms and equipment are coming his way as Vladimir Putin finally decides that going the full nine yards in Syria is actually a win-win for him politically. And the reporting on the ground backs it up. Critically, at best, one could surmise that the rebels have lost the tactical strength and, more importantly, the backbone to fight with any real gusto. But much more importantly is the will of swathes of Sunnis who really believed that their time in history had come and that only one year ago, their support for opposition fighters was not going to be taken in vain. Pity the nation. Some vow to continue the struggle peacefully; others say fighters are giving up for lack of arms, or to put a halt to the bombing and starvation. "Now there is no point, no money, no weapons," said a shopkeeper, speaking to an American reporter recently. "But I am sure there are thousands of young men who are just waiting for their chance to fight."

Yet the chance has come again. Obama's recent visit to the Saudis might have not been as cordial as perhaps the House of Saudi might have hoped. But even though Washington and Riyadh appear to be like an old couple who are preparing for divorce and can't quite decide at which critical marker they should chainsaw the sofa [Middle East] apart, there is still good will. The Saudis are itching to supply the rebels with the much talked about MANPADS, a shoulder operated rocket which shoots airplanes out of the sky. For the time being though, Obama can't quite bring himself to give the Saudis the nod. The political fallout of just one of those rockets being used against a western, civilian airliner is just too much to bear. But is it?

A few things about MANPADS. Firstly, they are already being used by the rebels in small numbers and with some success (a recent Syrian regime helicopter was shot down by one in Aleppo). Secondly, the Americans certainly have the technology to make them not wonder off into the wrong hands by putting hi tech security codes in them which are linked to the user, or on board nano computers which render the entire weapon useless if they move to far away from a given zone. And thirdly, it's not only the U.S. which makes them.

But the arguments and obsession with hardware reminds us that the Cold War is alive and well, firstly; and secondly that the real issue which drew the public in, in the first place - human rights - is not really even a slightest concern for the sanctity of leaders' virility.

Journalists love nothing more than to write about a particular gun or plane but the spoon feeding which originates from Washington spin doctors leads the distant observer distracted away from other areas which Obama would prefer the American public didn't probe: If Congress and the U.S. media look too carefully at Saudi Arabia and move beyond their comfort zone of the normal clichés about the kingdom, then greater conundrums present themselves and don't read well in the yet-to-be written chronicles of the first black U.S. president.

Saudi Arabia has human rights issues which the American people don't really know about. Political opponents, for example, charged for treason, sedition, or terrorism face public execution by sword in a place known as "chop-chop square."

Prisoners are regularly flogged for their alleged misdeeds and just last week the Saudis announced new tougher laws on atheists, a veiled, crackdown to monopolize free thinking there. And so if Obama starts to openly engage Riyadh to be his regional arms broker, then this could present him with a backlash prompting many to call for sanctions and regime change, with some asking "why are we helping a regime which seems to be stuck in the dark ages?" Or simply, 'Even Assad allowed women to drive cars, right?"

The problem for Obama is that the argument of helping others to help oneself is not strong enough. The Saudis have dreamed of removing Assad since 2005 when their own acolyte - Lebanese Prime Minister Rafiq Hariri - was assassinated by operatives loyal to Bashar al-Assad's father, the thenlate Hafez, who saw the Lebanese Sunni leader as a threat to his power in the region. But replacing him with a ragtag coalition of various al-Qaeda groups all bent on causing mayhem in the region toward Iran, Hezbollah in Lebanon and Israel (Golan) sounds like as sensible as letting your four-year-old play with his daddy's automatic pistol. The Israelis also see the opportunity to remove one of the three legs of a stool, a trilogy of Shia power in the region, as irresistible. They believe a Sunni hardcore rainbow coalition of moderates and fanatics would be easier to manage than the present Iranian-led dominance of part of the region.

But what has happened in this moment of deliberation between last August and now is a lot. The Cold War arguments don't always fit with Obama's legacy as he appears to be trying to de-polarize the region - a tricky maneuver in itself given than Sunnis always sided more or less with the West and Shias with the Russians - when the U.S. is moving out and trying to de-stigmatize Tehran. Whether Obama likes it or not, the old "western" influence is now being taken up by the Saudis, with Egypt being a good example of them taking over the role of Big Brother, financially and ideologically. Just how much thought of their Salafi ideology can be said to gel with western ideas of freedom of expression, women's rights, open media...?

Yet there's more to it than just merely a clash of ideologies.

The Saudis and the Americans have a lot to gain during this period of "trial separation." Already, we have seen a new breed of weapon arriving in the hands of rebels, as many analysts noted just a few weeks ago an extraordinary order placed with the Americans by Riyadh. The Saudi ordered 15,000 new anti-tank weapons to "replace" their old stock, which many argued would find their way to Jihad groups in Syria.

Yet who needs old ones? New, U.S.-made anti-tank BGM-71 TOW weapons have just this week been supplied to moderate rebel groups, allegedly by Washington. But is this move by Obama a compromise for not supplying the rebels with MANPADS or is there a bigger surprise to come? Assad supporters in the region should not celebrate yet. Just the anti-tank missile alone is going to be a game changer and the Saudis can always simply buy the MANPADS themselves given that there is a new impetuous from Russian President, Vladimir Putin.

The Russian leader seems to base his entire re-election mandate on his virility as, condemned by NATO for annexing Crimea, he is now reaching for the Viagra jar once more by defying the U.S. in Syria, by sending more and deadlier arms to help Assad. According to Jane's Defence Weekly and Stratfor, a U.S. geopolitical research company, Assad's force started using longer-range Russian Smerch and Uragan rockets for the first time in February. His air force has also gone back to using its aging MiG-29 fighter jets for ground attacks although opposition groups scoff at this and say the jets are using their air-to-air missile for ground attacks, a shoddy, at best, strategy for any effective strikes.

But Putin is hitting the target in other ways, no longer held back by the diplomatic "façade" which Crimea has now removed. "If Russia can show it's capable of carrying out its own foreign policy, regardless of America's wishes, it will be a major achievement for Putin" argues Alexei Malashenko, a Middle East analyst at the Moscow Carnegie Center. Reports say that Russia is supplying a "lifeline" of ammunition and spare parts for tanks, armored vehicles and helicopters.

It has $3.5 billion of military orders from Syria, including for Yakhont anti-ship cruise missiles, MiG-29 fighter jets and Pantsir short-range air-defense systems, according to reports from the Centre for Analysis of Strategies and Technologies.

In the last few weeks, Putin made real gains in Syria though simply due to Obama's inability to act swiftly and reluctance to supply the opposition with advanced weaponry such as guided anti-tank and anti-aircraft missiles out of fear they may fall into the hands of radical Islamist groups. But is that promise made on March 30 by U.S. Secretary of State John Kerry to Russian Foreign Minister Sergey Lavrov now redundant, following news that new U.S.-made anti-tank weapons are now being given the rebels? And could America's hesitation at the critical point now lay the foundations not only for Assad to quash the rebels once and for all, but also to assert Putin's military might across the entire Middle East? "Assad's victory over insurgents will change everything in the Middle East for Russia," said Fyodor Lukyanov, head of the Council on Foreign and Defense Policy in Moscow. Alexander Zotov, a former Russian ambassador to Syria goes further and argues that the bond between Putin and Assad is stronger than ever. "Russia's confidence in Assad's hold on power has increased as the conflict has evolved in his favor," he said. "No one is talking about Geneva III or IV now," Zotov said, referring to the possible rounds of talks after Geneva II collapsed in February.

But where is this new momentum of supplies, battle victories and stronger Assad-Putin alliance heading? The border with Turkey of course. After reclaiming areas near the capital Damascus and securing much of the border with Lebanon, Assad's army is now aiming to re-establish control over the border where many rebel fighters are in greater numbers, warn many analysts. It's not over. In fact, it's just about to start.