Syrian Refugees in Turkey and the need for international burden-sharing 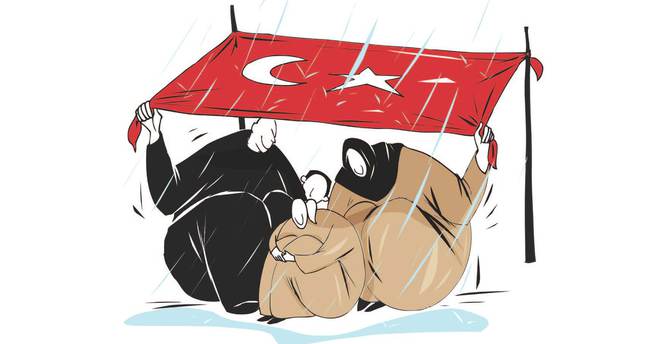 Since the start of the Syrian crisis, Turkey has taken in nearly 800,000 refugees, which represents one-quarter of all Syrian refugees. With 22 camps in 10 provinces, Turkey has been enormously generous in adopting an open-door policy by admitting all Syrian refugees, giving them temporary protection status and spending $2.5 billion (TL 5.3 billion) from its own budget. Turkish refugee camps have been described as "five star," exceeding many international standards of camp conditions. Rather than relying on the United Nations High Commissioner for Refugees (UNHCR) to establish and run the refugee camps, the Prime Ministry's Disaster and Emergency Management Presidency (AFAD) is in charge of the refugee effort. The camps are staffed by Turkish employees and nongovernmental organizations (NGOs) are given supporting roles. This allows the government to maintain control over the refugee camps and simplifies the support process as different NGOs often have overlapping services. It also minimizes some of the issues associated with refugee camps, such as diversion of supplies, crime, black markets and sexual assault.

However, Turkey's current strategy of building camps to accommodate the flow of refugees is not sustainable. The camps, despite their pristine conditions, are not a permanent solution. Boredom and a lack of purpose are serious issues as camp residents are not allowed to work outside of the centers and there are few available jobs. The lack of purpose in daily life is compounded by the lack of psychological support. Nearly half of Syrian refugees think that they or a family member needs psychological assistance, and lack thereof, combined with close proximity and unemployment, could spark unrest in even the most secure camps. Furthermore, while the camps are immaculate, the health situation is deteriorating. The lack of desire to stay in the camps, combined with the inability to meet all refugee needs despite intense efforts, demonstrates that the camps are not a long-term solution to the refugee crisis.

Moreover, Turkey cannot keep up with the growing flow of refugees, which far exceeds the capacity of the camps. Of the nearly 800,000 Syrian refugees in Turkey, only 224,000 are located in camps.

In mid-2012, Turkey adopted a more managed approach for admitting refugees, which resulted in the establishment of a number of makeshift camps along the Syrian border for those waiting to receive permission to enter Turkey. In the 25 camps, there are nearly 100,000 individuals waiting to get into Turkey. While some may prefer to stay inside Syria, the camps are faced with security challenges due to their proximity to fighting in nearby cities. There are also reports that health, education and nutrition standards are low, alongside increasing criminal activity. This restrictive policy led to a growing number of refugees crossing the border illegally or utilizing smugglers, especially as Turkey closed several crossing points due to security concerns.

Those who cross through unofficial crossings without passports have no identity cards or registration and, therefore, no way of accessing services or receiving aid. In addition, many urban refugees are unable to find adequate shelter or education, making them vulnerable to exploitation and abuse, particularly women and children.

Only 23 percent of non-camp Syrian children are enrolled in school due to overcrowding, and the majority entered the workforce to assist their families. Despite Turkey's extensive efforts to help urban refugees, the government is unable to keep up with the growing needs of the most vulnerable Syrians.

The influx of refugees into border towns has burdened local communities, causing rent and home prices to skyrocket. In the Turkish provinces of Gaziantep, Şanlıurfa and Kilis, real estate prices doubled and rents have increased three-fold from two years ago. The number of refugees also caused a rise in consumer prices, especially food prices, causing above-average inflation. Furthermore, Syrians forced to work illegally are depressing local wages and creating competition for Turkish wage earners. Decreased border trade and the closing of factories further impacted the economies of host communities. The combination of a loss of income from the Syrian crisis and a drastic rise in the cost of living could create resentment and hostility toward the refugees in affected communities.

The presence of non-camp refugees also created security concerns in border communities due to the open-border policy and movement of opposition fighters. Many people in Turkey died as a result of car bombs, rockets and stray mortars near the border. While the government made a significant effort to clamp down on border movement, the flow of fighters and smuggling of weapons along the porous Turkish border threatens the security of local communities.

Lastly, the presence of the refugees has a social cost on local communities.

Although multiple wives and early marriages are common in Syria, both are illegal in Turkey. However, thousands of these types of marriages have taken place since the beginning of the crisis as many refugees see marriage as the only way to gain financial security.

Furthermore, as few refugees are able to work, families are living off their savings or the generosity of Turkish hosts. As the conflict continues, these funds will dwindle, and more and more refugee will be unable to afford shelter and basic necessities. The deteriorating economic situation of many urban refugees also led to an increase in begging and petty crime, which will likely escalate as the conflict continues.

Turkey cannot continue to fund the building of more refugee camps. In order to address the needs of the current refugee population, Turkey would have to construct approximately 40 to 50 additional camps, which would require resources well beyond the $2.5 billion that the government already spent. While the majority of refugees would prefer to return to Syria, this will not be an option for many years to come even if a political solution is reached due to the widespread destruction within the country. The only possible way forward is to combine additional aid to host communities with third nation resettlement. The international community must agree to take in more Syrian refugees and provide additional funds to help neighboring nations cope with the crisis.

Currently, the international community has not met the relatively minor refugee quotas requested by the U.N., nor provided even half of the requested funds to help Turkey care for the refugees. The U.N.'s Regional Response Plan (RRP) for 2013 only raised 68 percent of the nearly $3 billion appeal and only 37 percent of the requested $372 million for Turkey was received. In 2013, Turkey received $176 million from the RRP and Syrian Humanitarian Assistance Response Plan (SHARP) compared to $934 million to Lebanon and $866 million to Jordan. While Turkey is a larger, wealthier and more stable nation, the international community should not neglect the needs of Syrian refugees in Turkey. The lack of funds is beginning to severely hinder Turkey's ability to meet the needs of the refugees - the monthly ration given to camp refugees for purchasing food will be cut starting this month.

Additional funds are needed to address current deficits in Turkey's response, including the provision of psychological support, greater access to education, delivery of aid to non-camp refugees, and protection for the most vulnerable, i.e. women and children, from exploitation and abuse. Without a show of solidarity from the international community to share the burden of the Syrian crisis, Turkey will continue to struggle under the growing costs of thousands of refugees who will be unable to return to Syria for many years. It is time for the international community to step up and develop a long-term strategy to address the Syrian refugee crisis.


* Research Assistant at the SETA Foundation in Washington, D.C.