The Half Hajj in Büyükada 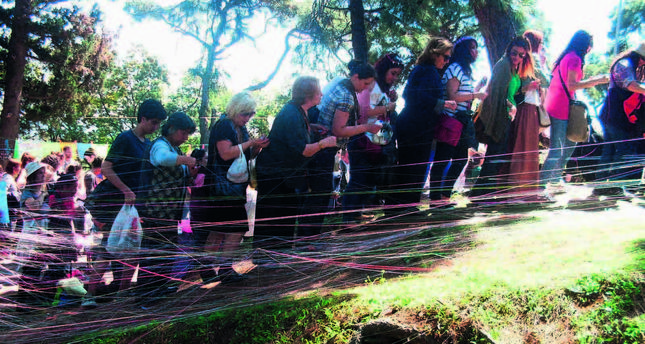 In 2010 Turkey's Directorate General of Foundations reinstated Greek Orthodox orphanage building's legal title in compliance with the court's decision. The Ecumenical Patriarchate intends to restore the building and use it as an environmental and interfaith dialogue center

On the 23rd of April, every year, a special phenomenon takes place on Büyükada, the largest of Istanbul's Prince Islands. Thousands of pilgrims climb the 203-meter ascent to Yücetepe, the summit on which the Greek Orthodox monastery of Saint George Koudounas has stood since the year 963 A.D. If these pilgrims were Greek Orthodox or other Christians, the event would be of little note. For the Orthodox, however, Saint George's Day is a moveable feast that is celebrated on Easter Monday with a quiet liturgy. Turkish Muslims, on the other hand, are not aware of the transference of the celebration, and they flock to the island with a devotion that astounds even Christians.

Early in the morning the pilgrims trek down Istanbul's hills by foot, tram, and taxi to buy their tickets at the quays of Kabataş, on the city's European side, and Bostancı, on the Asian side. They crowd at the ferry gates, surrounded by tulip and primrose beds and maple trees just coming into bud. Among them are young and old, wealthy and poor, sick and healthy, secular and religious. Yet a common purpose unites them all: they have a favor to ask of the saint.

During the hour-long ride to the island, the travelers breakfast on tea and sesame bread rings. If they come from Kabataş, they pass fishing boats in the Bosphorus and ships on route to Istanbul. Those who watch the water from the windows and decks notice that, as they enter the Sea of Marmara, the waves become bigger and the light reflecting on them softer. The pilgrims' happy chatter creates a holiday atmosphere, and the vendors of lemon-juice extractors and other gadgets entertain with lively sales pitches.

When the ferry approaches Büyükada, the wayfarers file toward the bow of the boat. As soon as it has docked, they cross rickety gangplanks and step onto the quay of an island filled with the Italianate villas of an almost vanished native Greek population. Most pilgrims queue for rides in phaetons, the only private vehicles allowed on the island, while others make the entire trek from the harbor to Yücetepe on foot. According to tradition, the pedestrian pilgrimage is a "half hajj" comparable to a half pilgrimage to Mecca or Jerusalem.

As the horse-drawn carriages speed off through streets of blooming wisteria, the walkers follow another uphill road to the outskirts of town. They pass humble cottages and fields of daisies, which young girls weave into crowns. Soon they enter the pine forest and come upon a Greek Orthodox orphanage. This impressive wooden building has five cantilevered floors, and it is the largest of its kind in Europe. Between 1903, its opening year, and 1964, when it was forcefully closed by the government, over 5,000 orphans were fed, cared for, and educated within its walls. Now, however, it is a teetering ruin inhabited only by a guard dog and a few clucking chickens, but there is hope for its future: in 2008 the European Court of Human Rights ordered Turkey to return the orphanage to its rightful owner, the Ecumenical Patriarchate, and in 2010 Turkey's Directorate General of Foundations reinstated its legal title in compliance with the court's decision. The Ecumenical Patriarchate intends to restore the building and use it as an environmental and interfaith dialogue center.

The phaeton passengers alight at the path leading to Yücetepe. There they join the walkers in order to complete the last stretch of the ascent on foot. This is where the festivity really begins. People picnic on the grassy areas beneath the pines. Phaeton bells, the carriages' substitute for horns, ring in harmony. The air is filled with the smell of horses and the aromas of food hauled up the hill by vendors, many of whom are housewives selling baked goods and stuffed vine leaves prepared in their home kitchens.

Most striking, however, are the tables of multicolored candles, votive offerings, and thread spools. There are special votives for almost any kind of problem: little keys for success, bells for good fortune, "blessed works" charms for the unemployed, and other talismans for students, the childless, the sick, and the unlucky in love. The colors of the wishing threads also correspond to the nature of one's invocation. Pilgrims tie them to bushes at the foot of the incline and unravel them on their way up. By late morning the path is covered with strings that get caught on one's feet and snap, and the bushes and trees on the right side of the path become a wall of brightly colored prayers. At the top of the hill, one catches sight of a myriad of lit candles melting into a stone wall. Talismans bought from the vendors below cover the trees surrounding the monastery. The fastening of votives, threads, and even rags to trees is an ancient pagan practice: it creates a channel between the saint and those who beseech his favor.

Headscarved grannies rest on the ridge overlooking the blue Marmara. Many have their palms open to the sky, in Muslim prayer-fashion. Supplicants who desire a home arrange sugar cubes in the shape of houses beside the path; miscellaneous vendors sell all sorts of irrelevant things, including jewelry and bras; and American, Chinese, and British Evangelists make strenuous efforts to convince the pilgrims that there are more practical and correct ways to the divine. Some distribute free Turkish Gospels, and a surprisingly large number of visitors accept the Gospels and take them home. Other Protestants, wearing "Prayer Authority" signs around their necks, advertise their offerings with the slogan "free prayer." The most desperate pilgrims, including devout Muslim ladies, stop to have the Chinese prayer authorities hold hands above their heads and pour their hearts out to God.

At the gate to the small church, a crowd pushes and squeezes every time a limited group of individuals is allowed inside to venerate. On a rise nearby, a British pastor lectures in English and provides illustrated drawings of his teachings, while his Turkish assistant translates with the hand gestures of a wound-up rapper. Interestingly enough, nowhere in the environs of Saint George will you see any Orthodox trying to promote their faith. Although the Orthodox Church opens its doors to all, it does not proselytize.

Those who survive the jostling of the crowd and the long wait in the beating sun finally enter the monastery. They light candles and stand before the icon of Saint George with their hands lifted in prayer. According to one elderly Orthodox priest, the votive offerings and wishing threads, with their hints of idolatry, are a new fashion that began about fifty years ago, but Muslims have been coming to the monastery to pray to the saint for as long as he can remember. Once he even caught a woman trying to shave off some of the icon's paint with a razor so that she could feed it to her sick child. So many people would ask him to intercede that he was obliged to withdraw to a secluded place and pray for all as a group because otherwise he would be on his feet until midnight. Whether the pilgrims engage in ignorant vandalism, however, or whether they solicit the blessings of a priest, one thing is certain: they have great faith in a Christian saint and in the servants of his church.

If one's prayer is granted, tradition demands that the supplicant return the following year to share the sweetness of the saint's favor by distributing sugar cubes. As felicitous return-pilgrims ascend, they greet those descending with warm smiles, boxes of sugar, and the wish, "May God accept your prayer as well."

As I finished my pilgrimage to Saint George, one of the foreign Evangelists handed me a flyer with the title "How will my wish be granted?" The answer, given on the flip side, is that one should not climb mountains, tie colored strings to bushes, make houses out of sugar cubes, light candles, or pin votives to trees. Instead, one should simply pray . . . and possibly attend their church. I, however, am convinced that although there may be easier ways to God, there are none more beautiful than the path to Saint George Koudounas on a sunny April morning.