As the Syrian crisis deepens we cannot lose interest 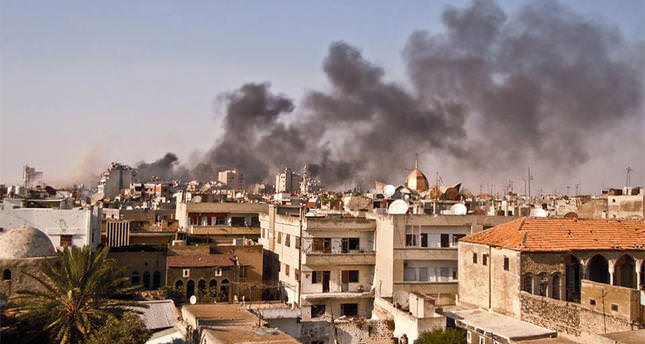 by Muhammad Zulfikar Rakhmat Apr 21, 2014 12:00 am
It has been nearly three years since the Syrian conflict began. The country has now been totally reduced to ashes. The human suffering is countless; no words or actions can mitigate even a tiny proportion of what the Syrian people have undergone. Other facets of the war, nevertheless, can be determined and the figures are not only stern, they are ominous.

It was recently announced by the United Nations refugee agency that the number of Syrians in neighboring Turkey and Lebanon has reached one million, 50 percent of them children. The U.N. declared this a "devastating milestone." The Syrian conflict has displaced an unbelievable 9 million Syrians from their homes, both internally and beyond the country's border. Nearly 3 million of them live a miserable existence as refugees in neighboring countries. It is also reported that the total number of deaths is more than 150,000 individuals. Every single person in this statistic exemplifies a spotlight of suffering that is inconceivable by any reasoning or logic.

Yet, the ongoing conflict in Syria constitutes more than the agony of the Syrian people. The country has now turned into a nexus of instability in the region. The never-ending fighting and ongoing violence is spreading beyond the country's borders.

It is forming wide gaps across the Middle East and, as American journalist Frida Ghittis puts it, "planting political landmines in an area of heavy traffic."

Malevolent powers are becoming stronger day by day, moderate forces are falling behind, the region is becoming more divided, and a large number of individuals from different countries including the West are increasingly mobilized to fight in this war.

In neighboring Lebanon, the Syrian catastrophe is weakening the country with each day that passes.

The nation that experienced a 15-year civil strife, which caused a death toll of 200,000, is stumbling.

Lebanese Sunnis are angered by Shiite Hezbollah's decision to take part in the Syrian war. That, of course, has provoked the Sunni population to mobilize too. Violence has flared up with bloody fighting breaking out within Lebanese borders. High-ranking government figures have been killed and hundreds have died in shoot-outs. A significant number of car bombs have also exploded in the past several months.

Similarly, violence has intensified lately in Iraq, partly as a consequence of what is happening in Syria. Political fragmentation over Syria has led to a crunch in ties between Qatar and Saudi Arabia, each of which is providing arms for opposing sides of the anti-Assad forces.

During the U.S. President Obama's visit to Riyadh last week, he publicly declared his intention to offer the Syrian opposition new weapons.

This is a dangerous idea and the White House and its friends should instead step up their humanitarian aid to the most vulnerable Syrians affected by the war.

Syrians have enough artificial warnings, threats, and diplomatic efforts. What they need now is real, genuine, and serious efforts to end this agony. The conflict in Syria, now entering its fourth year, is one we cannot allow to drift from our minds. If we continue to ignore the calls of desperate Syrians, the rest of us will eventually pay the price.