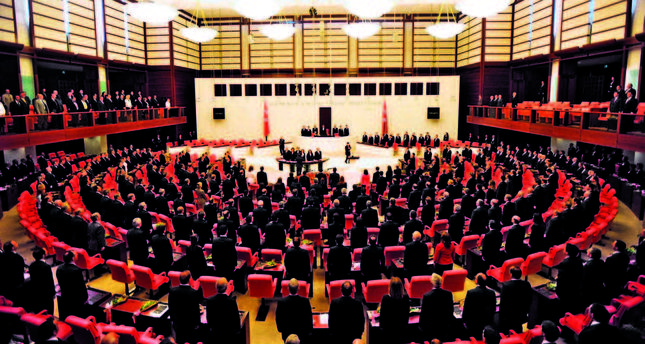 by Bayram Zilan Apr 23, 2014 12:00 am
There is a growing need for a strong opposition party that represents all 'the others' against the AK Party. Can any of the political parties meet this requirement?

The primary requirement for Turkish democracy is a strong opposition party.

Opposition parties are indispensable to democracies. The opposition includes those parties that are not within the main political powerbase. In this sense, except for anomalous situations, even if the political parties constituting the opposition change in terms of numbers and name, they are continuous. In democracies, there is always an opposition party against the ruling government.

Survival of the democratic regime depends on the variability of governmental and oppositional relations. It is also contingent upon minority parties becoming the majority and undertaking political responsibility, as well as the majority taking over the oppositional task when it is outnumbered in elections. With this interchange, not only people but also ideas change and various programs including diverse opinions are practiced.

Undoubtedly, Turkey has lots of urgent needs to be immediately addressed. A civil constitution is first and foremost.

No matter how many constitutional amendment packages have been launched, for 33 years we have been governed by a constitution issued in the period of a military coup. We are constructing a new Turkey, however, we are doing it according to the constraints of the old Turkey.

We have a number of complications in Turkey. Laws such as the Turkish Civil Code are not suitable for the reconciliation process with the Kurds, the 10 percent election threshold disrupts democracy, the justice system blindly discriminates against people in terms of ethnicity and language, and police officers that look to arrest Prime Minister Recep Tayyip Erdoğan's son (it is not certain if they serve the state or the Gülen Movement).

We have outdated laws that are caught unprepared for the reconciliation process and we have institutions that belong to the period of military coup and are unsuitable for EU membership negotiations. We again have an institution of religious affairs that only serves Hanafi members and falls far behind secular values.

We have unopened democratization packages that will extend rights to Alevis, non-Muslims and other sectors of Turkish society. But along with all this, Turkey lacks an opposition party to force the government to fill these gaps. It needs an opposition which pushes onto the agenda demands such as democracy, rights, justice and equality for other parts of society.

If liberal authors such as Cengiz Çandar, Hasan Cemal and Mehmet Altan do not compare this year's election results with the death rate of babies in the EU, they will clearly see that Turkey's primary need is a strong opposition party. We require a strong opposition that appeals to all of Turkey, pays attention to the public's demands and offers solutions for problems which are not on the political agenda. In short, what Turkey needs is an opposition that develops alternative solutions instead of adopting defensive politics.

This has been a requirement since the 2002 elections.

As long as the present opposition parties do not adjust themselves to the new conditions and remain on a regional basis, the electoral map of Turkey, which clearly indicates the AK Party's success, will not change until 2071.

Furthermore, Turkish politics unconsciously and organically is heading toward a presidential system that is based on a two-party model.

This is unavoidable as the electoral picture from 2002 onward shows the necessity for a two-party political system.

Especially in the last elections, as Chantal Mouffe and Ernesto Laclao explained in their theory of radical democracy, antigovernment mechanisms were allied against the AK Party through agonism - the potentially positive aspects of certain forms of political conflict.

The antagonist structures such as the Nationalist Movement Party (MHP), the Republican People's Party (CHP) and the Gülen Movement, which have nothing in common, have become entwined to change the current political map. But as Mouffe and Laclao say, this happened antagonistically rather than in unifying way. Therefore, here is a Machiavellian ally, which is thought to be dirty.

In fact, Turkey went through a breaking point with the electorate in the 2002 elections. Then, with this break, electoral preferences were re-determined and consolidated with each and every election. The AK Party managed to consolidate the new coalition it represents, which is made up of democrats, Kurds, conservatives and liberals.

Aside from the Peace and Democracy Party (BDP), the other parties tried to survive by adopting anti-government policies rather than engaging in alternative politics.

This method naturally ended in a division of the AK Party versus the others. As "the others" failed to be a broad and popular party, a dissatisfied grassroots has arisen and partly paved the way for street protests.

In the current situation, there is a growing need for a strong opposition party that represents all "the others" against the AK Party. Can any of the present political parties meet this requirement?

Real political conditions, the average number of deputies in the Grand National Assembly of Turkey (TBMM) and the hardline stances of other parties show the BDP is the most likely party to satisfy this need. But does the BDP stand a chance of becoming a mass party? Does the political conjuncture give BDP the chance to fulfill this opposition gap? Definitely. Turkey's present atmosphere, which has been free from clashes and characterized by dialogue instead of the launching of weapons for the past 14 months, has normalized the country and produced some positive shifts in Turkish politics. Ethno-nationalism is increasingly losing favor in Turkish society.

It is not easy to survive through the discourse of nationalism on a platform where conflict and bloodshed have been eliminated. When a society feels threatened by itself and those who are like it, it turns to a party that is more like itself. This is a social instinct. However, with the elimination of chaos that causes this sense of threat, the situation of withdrawal and need of protection are replaced with efforts to get in touch with "the others."

On the other hand, Turkish society did not overlook the optimistic ambiance created by the reconciliation process with the Kurds, BDP's positive and dignified attitude in the process and its success in convincing its supporters not to take to the streets despite provocations.
Even if we say that the attempts by the BDP and the People's Democratic Party (HDP) to become a countrywide party failed on March 30, it is still too early to make a concrete judgment about the parties. Moreover, the last elections did not establish reliable and impartial grounds to really test the HDP because in many of the provinces where the party ran for election, some holy alliances were formed against the AK Party and the electorate tended to vote for the strongest party against the AK Party.

It seems the Turkish people favor parties that promise further democracy and stability by adopting a comprehensive and unifying discourse rather than one based on discrimination. In addition to this, they are well aware of the parties that represent civil politics and set a better future for youth by providing the capitulation of arms.

All of these provide big advantages for the BDP. If it can reverse the perception of being a Kurdish party and put aside its ethnic-based discourse by developing a new one, it could become the most powerful party in Turkey to fill the opposition gap. BDP chairman Selahattin Demirtaş and his colleagues say the party is cooperating with the government in building dams, nuclear plants and on environmental issues. However, these policies failed to gain any ground in the public's perception and memory. It should not be forgotten that so far the Kurdish question has been the lifeblood for the supporters of tutelage. Today, however, the same problem is a source of democracy, equality and justice.

In the final analysis, such topics as the reconciliation process, democratic initiatives, the civil constitution, the presidential system and demands from different parts of society for freedom and equality contribute to popularizing the BDP and helping it become the main opposition party. The average number of deputies in the TBMM also strengthens the BDP's hand. The BDP is the backbone for the construction of a new Turkey, which will be based on equality, justice and democracy. If it supports this construction, sides with the current political powers against the supporters of the old Turkey, meets Turkey's ongoing requirements and changes its discourse, it could be the biggest opposition party and even a candidate for government.

It would also have the potential to be one of the two parties of the two-party system that will be set in the upcoming years.

In the following days, we will all see whether the BDP makes use of this spontaneous and historical opportunity or if it will continue to be a regional party and miss the opportunity.

In any case, Turkey has to satisfy its need for an opposition party. Only in this way can it strengthen its democracy.

Unless one of the present opposition parties (CHP, MHP and BDP) meets this requirement, a new political party will be established to fill this gap in Turkish politics.