What would Jon Stewart do? 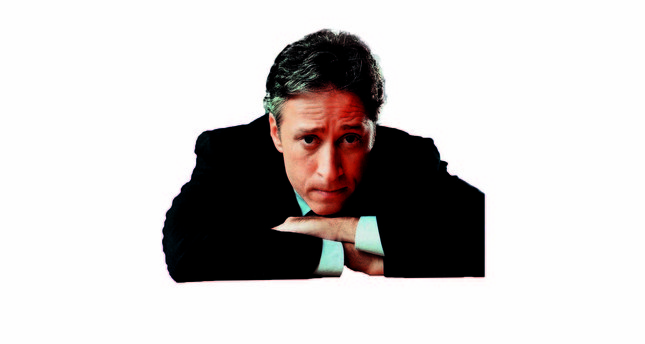 What would Jon Stewart do if he were dissecting Turkish media to get to a place approaching objectivity?

That's what I ask myself as I stream political talk shows that quickly become a game of he said, she said, arguments coming from a place of emotional fervor but little analysis.

Stewart's dose of critical thinking examining the day's headlines and unpacking the origins of the oft-repeated jargon is sorely missed in an atmosphere controlled by media industrialists that maintain the illusion of a society in discord. And if you were to assess the state of Turkey by the media alone without having ever lived here, it would sound as though the world was coming to an end and the nation was on the verge of collapse.

Further complicating the journey toward objectivity is the nation's complicated history that empowered the few and left many disenfranchised.

A primer on the history behind the rhetoric What the world outside Turkey is not familiar with is how deep-rooted and prevalent prejudice based on an individual's socioeconomic and religious background is and how it shaped the nation's troubled history.

We are acquainted with the injustices of apartheid South Africa and the African-American struggle for civil rights in the U.S. but there is little to date on the prejudicial treatment incurred by a majority of Turkish society at the hands of the White Turks.

From the formation of the secular Turkish Republic in 1923 by Mustafa Kemal Atatürk, practicing Muslims had their religious identity and script stripped from their public lives. Men could no longer have beards, women were discouraged from covering their hair (covered women had their headscarves ripped off in public spheres) and the original Turkish script in Arabic letters was replaced with the Latin alphabet, among many invasive measures. It is considered a deeply painful time in modern Turkish history for the majority of its people.

For his part, Atatürk saved the country from imposing French, British and Italian forces, albeit by using draconian measures. He introduced public education and encouraged the role of women in public life. For the staunch Kemalists, it is considered a time of further European cultural integration and therefore deemed a time of great progress.

In the years since, social mobility in business, education and politics were afforded easily to those who fully subscribed to Kemalist ideology and those who did not were left with little opportunity despite their best efforts. The Republican People's Party (CHP) was founded in 1924 and early on the founders separated themselves from the rest of society by referring to themselves as the "vatandaş" (citizens) and others as "halk" (people). They developed an exclusive society where the involvement of the socioeconomically disadvantaged or practitioners of religion were shunned.

This group became the bourgeois and today is known as White Turks. A quote from a CHP official from a 1950s newspaper captures this prejudicial disregard for the people: "The halk have gone to the beaches, so now the vatandaş cannot swim in the sea." That meant the beaches were filled with commoners, so the elite cannot possibly swim in the dirtied waters of the common folk.

Whenever a democratic movement arose from the part of society that was kept isolated, there was a coup and the military immediately seized power. In 1960, Turkish Prime Minister Adnan Menderes, popular with all segments of society, was forcefully removed and publicly hung by a military junta. This same tactic was repeated in 1970, 1980, 1998, and most recently in the 2003 and 2004 coup plots that were caught and subverted. During these years, societal divisions were laid and reinforced with military brutality to keep power in the hands of White Turks.

Against this heightened context of political trauma and the 80-year struggle for fair treatment, the people saw a victory of the party that democratically represented them. The AK Party's victory came as a watershed moment in Turkish history in that all Turks, regardless of religion, ethnicity or class, under Prime Minister Recep Tayyip Erdoğan's leadership, were afforded opportunities for social mobility. Even though Turkey is a Muslim-majority country, practicing Muslims were looked down upon. It is still rare to see a woman wearing a headscarf on television despite the fact that 65 percent of Turkish women cover their hair.

To get an idea of the sway the White Turks have politically, one must understand that even with a majority of women covering their hair, the Turkish prime minister had to tread carefully to remove the ban on the headscarf because of the repercussions from the minority CHP.


The ban on women wearing the headscarf was lifted recently in October 2013, ten years after the AK Party came to office. However, women in the judiciary, military and police are still banned from wearing it.

The rarity of covered women in the media is a direct reflection of the pull White Turks continue to hold in this realm, as well as the dearth of accounts on the struggle for fair treatment and democratic representation incurred by the majority's difficult history. And since English was a language only the bourgeois had access to, the elite dictated what the world would know about the state of Turkey's internal affairs. Over the years, they established strong relationships with international media outlets in the absence of the peoples' voices and this continues to strongly influence the way Turkey is perceived by the world.

But their prejudicial residue can be found if you look through any article that has been critical of Turkey's growth and its leadership in particular. There is one constant: there is always a mention of Turkey's prime minister being from a working-class neighborhood and a number of negative associations made about him stemming from his socio-economic background.

Among these character assertions are that he is rude, short-tempered, stubborn and that his working-class background makes him a sort of a "street fighter." In fact, it is just as unlikely to see a covered woman in any media portrayal coming from Turkey as it is to find anything positive written about the prime minister.

Assigning these negative associations to someone's class in much of the bourgeois-controlled media in Turkey is the norm. For example, in last week's publication of the Radikal daily, a Gezi Park protestor wrote about having attended an AK Party youth meeting and how the youth at the meeting appeared to be starving and ma l nourished.

His comments did not come from a place of empathy. His statements were a jab at the socioeconomic backgrounds of AK Party youth.

After recent local elections, the CHP discredited the results by saying that a majority of Turkish society that voted was not qualified to decide who its elected leaders should be by saying that the masses do not have the sophistication or intellect to know what real democracy is because of their social class.

Despite Turkey's unparalleled progress and stability in the most volatile region in the world, Turkey's image and that of its leadership has been barraged with negative assertions. As an American living in Turkey, I find it interesting that much of what I read from the international press uses the same class-oriented jargon repetitively and without question.

Would this type of class-affiliated denigration of a person's achievements be tolerated in the U.S. media?

Do we berate the achievements of U.S. Presidents Barack Obama or Bill Clinton because of their working- class backgrounds? No.

Instead, we celebrate their accomplishments and all the adversity they overcame to become the leaders that they are. If the U.S. presidents were condescendingly mocked because of their socio-economic origins by any major media outlet, that media outlet would be shunned and lose all credibility.

We do, however, assess the quality of their leadership based on certain variables, including economic growth, educational advancement and social welfare progress. If they are not making positive movement in these domains with measurable outcomes, then criticism is abound. Evaluating the prime minister's record using the criteria mentioned above, it is apparent that Turkey is consistently growing stronger in all areas.

It is peculiar that this type of rhetoric stemming from the Turkish prime minister's working-class background has become the common way of characterizing him. If the prime minister was written about from an American perspective, he would be the classic example of what it means to attain the American dream. Instead, the unchecked class-bias paints a picture that he does not deserve accolades because his background lends him to be someone who is not worthy of leadership.

However, he will go down in the history of the people that have popularly voted for him in eight elections as the leader that brought unprecedented social welfare progress.

What would Stewart do? He would work toward understanding the origins of the rhetoric that has become common in Turkish media. And as a commentator who is vocal about the importance of working against America's growing class divide, he would be perturbed by the way class-associated prejudice has become institutionalized here and bring light to it.