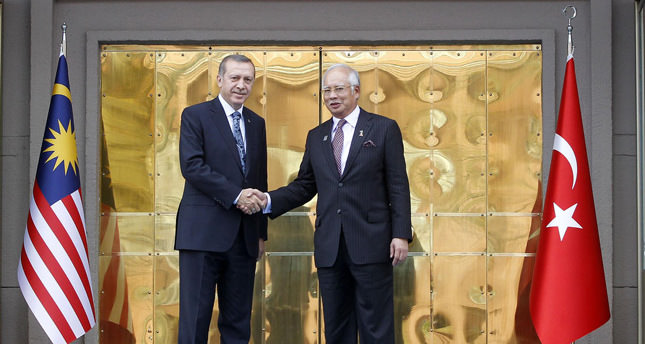 Working to arrive at common positions, Turkey and Malaysia support each other's bid for a non-permanent seat on the United Nations Security Council for 2015-2016

Indeed, Najib's April visit came months after Prime Minister Recep Tayyip Erdoğan's visit to Malaysia in January 2014. The year 2014 has become significant not only due to the high-level visits by the heads of each government but also because it marks the 50th anniversary of the establishment of diplomatic relations between Ankara and Kuala Lumpur.

Upon Erdoğan's January 2014 visit, the Turkey-Malaysia Inter Parliamentary Friendship Association and His Excellency Amran Mohamed Zin, the ambassador of Malaysia to Ankara, sat together on Feb. 18, 2014.

President Abdulkerim Gök hosted the ambassador at the Grand National Assembly of Turkey in the first gathering of the association since its establishment in 2012.

During the meeting, Gök expressed his happiness over the framework for strategic partnership between Turkey and Malaysia. The initiative was taken during Recep Tayyip Erdoğan's January 2014 visit and a declaration was signed to boost bilateral relations on a wide range of affairs from education to defense. Gök highlighted the importance of tourism to improve peopleto- people relations between the two nations. The intention to declare a Turkish Cultural Year in Malaysia and vice versa was expressed.

In this respect, the relationship between the metropolitan cities of Istanbul and Johor Bahru, and Ankara and Kuala Lumpur as sister cities should go beyond their existence on paper. Student and professorial exchanges, humanitarian efforts or even waste management strategies can be used to build actual relationships between these major cities.

Prime Minister Najib Razak delivered his "Malaysia-Turkey Strategic Partnership in a Globalizing Asia" speech at the Foundation for Political, Economic and Social Research (SETA) in Ankara on April 17, 2014.

Evaluating the diplomatic relationship between the two countries, Najib highlighted the similarities between Turkey and Malaysia. Despite there being 5,000 miles and about 10 hours of air travel between Istanbul and Kuala Lumpur, the two countries are similar in their moderate interpretation of Islam and democratic system of governance. Najib said both countries should play greater roles in handling the world's primary security challenges as both nations lie in strategic positions in significant regions.

On peacebuilding and conflict resolution, Malaysia plays an active role at the regional level helping to broker a peace deal in the southern Philippines and taking initiative for negotiations in Patani, Thailand. Malaysian First Lady Rosmah Mansor, who accompanied the prime minister on the two-day official visit, also expressed her appreciation for Turkey's efforts with Syrian refugees. Presenting donations from the Welfare Association of Wives of Ministers and Deputy Ministers (BAKTI) and the Global Children's Well-Being Fund (GCWF) to the Turkish Prime Ministry Disaster and Emergency Management Presidency (AFAD), Mansor affirmed the goodwill and friendship of the Malaysian people for those less fortunate.

Fatih Özer, the head of the Department of Response (AFAD) expressed his appreciation for the donations from the Malaysian people. Özer briefed the Malaysian delegation on AFAD's plans to collaborate with Malaysia in the near future, stating that Turkey can benefit from Malaysia's experience - particularly in flood management.

Najib's 2011 visit, which was the first trip by a Malaysian prime minister in 30 years, planted the seeds for friendly relations with his counterpart Recep Tayyip Erdoğan. Indeed, the famous "selfie" taken at the Ankara Palas dinner on April 17 was digital proof of the two leaders' harmonious relationship in which they address each other as "brother."

In a joint press conference, both leaders expressed their strong commitment to further strengthening the bilateral partnership. Erdoğan described the meetings as very fruitful, while Najib indicated that a target trade volume of $5 billion in five years is achievable with the free trade agreement (FTA) the two countries signed.

The FTA was signed between Minister of Economy Nihat Zeybekçi and Minister of International Trade and Industry Mustapa Mohamed with the aim of providing reduced costs and bringing prosperity to the two nations.

Having stated that the Khazanah Fund and Malaysia Airports will increase their investments in the healthcare and aviation sectors, Najib promoted the Islamic Finance Industry in which Malaysia has established itself as one of the three leading Islamic banking centers.

On the sidelines of the visit, memorandums of understanding were signed between the National University of Malaysia (UKM) and Ankara University, as well as Hacettepe University.

Working to arrive at common positions, Turkey and Malaysia support each other's bid for a non-permanent seat on the United Nations Security Council for 2015-

2016. Moreover, the Organization of the Islamic Conference (OIC) and the Developing 8 (D-8) are two other strong common grounds for greater integration across borders.