Why Turkey should be part of Lebanese presidential jostle 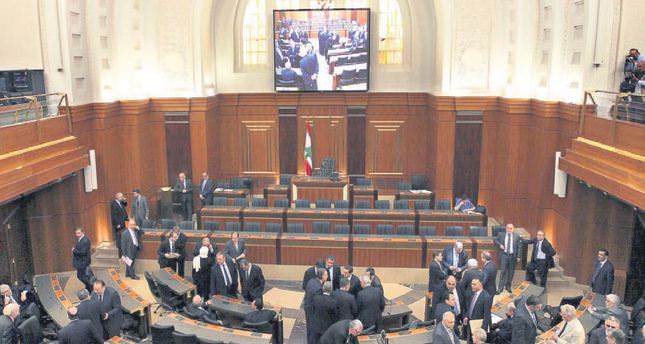 Hezbollah's weapons are staying put, yet subject continues to derail presidential race. The question remains whether the new president will put an end to the affair

I wonder if most Turks can even imagine what it would be like to have their sovereignty stripped from them? While the upcoming elections will be the first time the Turkish president is selected by popular vote, in poor Lebanon, a country so shattered by sectarian fighting that Lebanese are resigned to letting others chose their fate, the decision is made in foreign capitals. It's a tragic story, but one which actually started long before Lebanon's civil war began in 1975.

In 1943 it was pretty much the same. Then it was the French and the British who haggled over who should be president of this shiny new independent breakaway country from Syria. In the 60s it was Egypt and the U.S. In the 70s and 80s Syria and the U.S. These days Lebanon's fate remains largely straddled between two powers: the Saudis and the Iranians. But for the first time, a third player now emerges independently as an offbeat candidate for muscle man, the U.S.

Lebanon is consequently in the middle of a threepoint wrestle. Yes, bizarrely Washington now stands more alone, spliced from Saudi Arabia's side by a diplomatic debacle with Riyadh which more or less kicked off the moment Obama decided to take Iran out of the deep freeze and bung it in the microwave to see what smells will emerge from the back of the grimy machine of international diplomacy. Yet despite such fabulous flippancy, America's influence should not be underestimated despite what you might read in the international press about U.S. foreign policy packing up and heading for the Pacific.

Lebanon's next president is important for the Middle East and its neighbors, including Turkey, as the figurehead must be an individual who can muster respect from Hezbollah, while also micromanaging the Shia political movement, whether it is part of the ruling coalition or not. But equally, such a president cannot be considered to be in the pocket of Washington or friendly at all with the key American players. And herein lies the problem today in Lebanon. How can the present system - set by colonialists decades ago which dictates the president must be a Christian - accommodate such a contemporary twang?

Samir Geagea, a controversial candidate could never have been president. Not because of what he is alleged to have been party to in Sabra and Shatila in 1982 under Israeli "orders" when hundreds of Sunnis thought to be Palestinians were slaughtered, not because of the assassinations of political leaders who still haunt him to this day as their names are hijacked by Hezbollah who use them on their ballot papers when they made their mock vote in the parliament, as just a few weeks back. No. Geagea cannot be accepted as president simply because of the recent rhetoric of his to promise to do the unthinkable: to remove weapons from Hezbollah. When I met him recently, he used the word "confiscate" when talking about key po-wers which Hezbollah has seconded from the Lebanese state and remained despondent about his own rejection from mainly Hezbollah MPs (and their coalition members) who accuse him of being a fake candidate, presented by Former Prime Minister Saad Hariri's Sunni-led opposition group to stall the Lebanese presidential process.

There is some logic to this. Such an act of Geagea becoming president, I'm told by many political pundits in Beirut, would immediately result in civil war as Shias have not come this far in Lebanon's history to have their arms taken away from them from a man who once took orders from Israel.

And so the natural answer to this would be Michel Aoun, also a former army general who decided to form an alliance with Hezbollah and be part of the ruling coalition in Lebanon. But his recent statements about making commitments to the U.S. have already pushed him onto his own sword, I am informed. Washington is seen as entirely part of the same woven cloth as Israel and therefore the enemy of Hezbollah, despite what Iran is doing presently. Even if the U.S. wants less influence, the history of its wrath is still predominant and a new president cannot be seen to be an ally of Washington in any way. While Obama serenades Mr. Rouhani as his new friend in the Middle East, it is Hezbollah who are staying focused on what really matters: the U.S. is funding opposition fighters on the battlefield in Syria, which for most Shias is merely an extension of a previous war with Israel which climaxed in 2006 when Hezbollah forces gave the IDF a bloody nose.

It's hard enough for Hezbollah to accept a Christian president as an anachronistic quirk to Lebanon's constitutional rules. But to consider one who is making deals with Washington? Out of the question.

And so Lebanon is stuck with a political vacuum which will irk the regional powers. Lebanon was always their back yard where they carried out their own scraps rather like British football hooligans who use a pub car park for a punch up to settle a dispute. But even after the broken glass is swept away, for it to remain without a president is worrying as many are concerned here that the relative peace which was agreed by Iran and Saudi Arabia just a few weeks ago for this tiny country, might expire soon. Just in recent days, security forces have unearthed evidence of a plot by Syria's own Al-Qaeda affiliate, Jabat al-Nusra, to continue with its program of car bombing Hezbollah neighborhoods. The relative calm we have experienced here recently is said to have been as part of a pact made between Tehran and Riyadh but made on a grassroots level between Hezbollah and Hariri. The unwritten agreement more or less surmised that Hariri would tolerate Hezbollah fighters in Syria if the Shia group would accept giving away three key positions in the cabinet to Sunnis: the defense, interior and justice ministries. Key to this was reeling in hardcore Sunni Islamic groups in Tripoli and putting an end to the car bombs.
But patience is wearing thin and the news of Nusra attempting to set up a new program of bombing shows that Lebanon's interior minister has got his work cut out. Tripoli may well be calm and Hariri is indeed planning on rebuilding the damage and taking care of the wounded (as was reported recently) but Al-Qaeda plotters have not been quashed, but merely moved.

They've gone underground. It's as though Lebanon, with its caretaker cabinet, was battling against all the odds. War pundits always mused that the more Assad's forces scored more victory battles in Syria, then the more "terrorist" type attacks would be carried out in Lebanon against Hezbollah neighborhoods. But this has not been the case under the temporary cabinet, with its Sunni ministers in security positions.

The question on everyone's mind, is how long this bad aid can hold? Would a new president pull it off immediately in his first week in office leaving Lebanon to fall into the "abyss" journalists love to coin? In many respects, we need a Belgian solution (i.e a candidate for leader who is so consensus-driven that all sides could at least not object to him, therefore allowing a dialogue to take place.) Lebanon needs a quiet, lack-luster internationalist who does not carry the gravitas to even be invited to a U.S. consular mothers' cheese dip party but has the intellectualism to carry him through the political maize of regional squabbling. An academic perhaps, or a businessman?
Or even an aging former 1980s President? Step forward blast-from-the-past Amin Gemayal, remembered today more for his hairdo rather than his political candor. Mr. Gemayel, like his nemesis, Mr. Geagea also has a checkered past as he was president before for six years during the civil war which ended in 1990.

But the failure by both the opposition block (Sunni mainly) and the governing coalition (Hezbollah led) to choose a candidate has encouraged Gemayel to throw his hat in the ring. According to reports, Gemayel would launch an initiative aimed at preventing a feared vacuum in the presidency, with many MPs saying that an extension of the current president's term is impossible. He might just have a chance. The bitterly fought battle for the country's top Christian post is unlikely to be between Mr. Geagea and Michel Aoun, the latter being Hezbollah's officially preferred candidate as neither can get the majority vote out of 126 seats, putting a new focus on the elections toward what many in Beirut are calling "a neutral candidate." "Aoun is telling everyone he's the only one who can work with Hezbollah," says retired General Hicham Jaber, a keen Hezbollah observer and political commentator who often appears on Al Jazeera TV and BBC. "But if he is making any commitments with the U.S. then I don't see Hezbollah being able to back him...so I think the elections will be rescheduled for September," Jaber says.

And so Lebanon cannot find an agreement itself and therefore will rely on regional powers - mainly Saudi Arabia and Iran - to do it for them, with some minor American commentary from the wings.

Geagea's claim that the vacuum now created will play into the hands of regional powers though is too naive a comment to be taken seriously from a politician who has lived and died by the sword for 30 years (spending eight years in jail for his alleged crimes during the civil war). They were involved from the very beginning but have just learnt to muffle their voices to let the children believe they have built their own sand castle without help from the adults. But certainly the accelerated diplomatic push that Turkey is behind to improve relations with the Gulf States can play a role here in the process as Ankara is both a regional power, a NATO member and a key ally of both Gulf Arab countries and the U.S.

Left entirely to its own devices, Lebanon will just continue to play the same old songs from the 1980s like a stuck Duran Duran LP with the stylus permanently returning again and again to "Rio."

Geagea, Aoun and Gemayel all battled to be president in 1988 when the latter defended his office and lost. But after 26 years, they're back again. History does seem to repeat itself for those patient enough to stick around and see fashions return, rather like this flared trousers you kept in your drawer since the 80s. And yet it says so much about the seriousness of the process and its people that the entire subject is reduced to frivolity at best and mockery at worst. London-based blogger and Vice contributor Karl Sharro, a Lebanese architect who created this Soprano-esque montage of the Christian presidents took great delight at mocking Gemayel's dress and hairstyle, locked in a 1980s timeline.

But the look might come back. Let's hope the Iranians and Saudis understand the importance of shoulder pads and who Bananarama were.