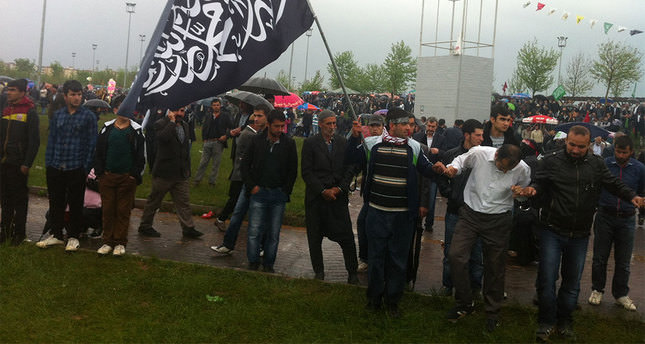 by Rahman Dağ May 21, 2014 12:00 am
It is better to start with such a shocking argument that is if the atmosphere appeared and witnessed in both Holy Birth Meetings (Kutlu Doğum Mitingi -referring to the birth of Prophet Mohammad) with the number of waved tawhid flags, responding to Tekbirs as Allahuekber (God is the Greatest), and recitations of Mevlids (Narratives of the birth of the Prophet Muhammad) was in any western part of Turkey, the headline of certain newspapers and news channels would definitely be that "Irtica Geri Geldi" (Reactionism-Islam-returned). And if the previous powerful military tutelage was still in place in Turkey, only these meetings may have constituted enough to justify a military coup d'état on the grounds that the constitutionally secular character of Turkey was being degenerated.

Yet, none of this happened and people just put tawhid flags on their shoulders on their vehicles. It means that the religious symbols and discourses still prevail in the region among Kurds whether they are electorates of leftist-oriented legal or illegal Kurdish nationalist movements or in Hizbullah-originated Huda-Par.

In my point of view, such an argument would be possible despite the fact that Turkey has been governed by a conservative democrat AK Party for more than a decade. As President of the Democratic Society Congress (DTK) Ahmet Türk stated in his speech during the meeting, "Kurds are more religious than those who claim they are Muslims but deny the existence of an ethnic identity, which is an ayah of Allah." Overall, there are suitable social realities and practices in which Islam as a dominant religion of the region can be one of the crucial political actors determining people's electoral preferences and so naturally the policies of political parties.

This is all about the post-violent since both political-social organizations are still accusing each other of violence and murders committed by the PKK and Hizbullah in the last decade of the 20th century. Then, they were successfully and easily recruited militants by employing Kurdish and Islamist identities in the region and did not need electoral support to justify themselves; holdings guns had served the same purpose.

The previously mentioned social credibility of Islamic symbols, discourse and practices pave the way for Islam to become a newly resurfaced political actor in the Kurdish populated areas. Comparatively, DTK (covering all other extensions of Kurdish political movement) has the upper hand in terms of a consolidated electoral base as a result of its reputation obtained by the struggle for Kurdish ethnic and human rights against the state's denial policy and repression in the last three decades. On the other hand, in spite of the fact that Huda-Par also mostly consists of ethnically Kurdish and religiously sensitive people, its electoral base is considerably low and its history is full of extreme violence. Even if it is not so and they are just allegations, the perception exists in Turkey as if it was reality.

Responding to such perception, Huda-Par might argue the same accusation against the PKK and its social and political branches but it would not make too much change. In addition, the leftist-oriented Kurdish movement has much organizational and hierarchal administrative experience compared to the Huda-Par. Furthermore, Peace and Democracy Party (BDP) has been running most of the eastern mayoral offices including Diyarbakir for decades, which will impact on its performance. For instance, BDP indirectly celebrated the Holy Birth Week via displays of public buses in Diyarbakir and provided free return transportation to the meeting area from multiple points while Peygamber Sevdalıları Platformu (the Platform for those who loved Prophet Muhammad) did not have such capacity and had to use its own resources.

Taking all these conditions into account, the meetings suggest that DTK utilizes Islam to endorse their stance (together with all other organizations) as being the one that was oppressed and therefore argues that what they have done is actually Islamic because they have always sided with the oppressed and fought against oppression in all its forms. Most of the speeches made during the meetings brought forward more or less this argument as if they did not do anything wrong in accordance to Islam. From the Peygamber Sevdalilari Platformu's perspective, they are the ones who are actually Islamic because they have given importance to the Prophet Muhammad, as the prime example people should take from the beginning.

Considering that the AK Party is already a vital actor to get religious people's votes and KDP (Kurdistan Democrat Party) representing traditional representatives of Kurds in the 1960s and as a continuation of Barzani-style leadership has just jumped into politics as a result of the current peace process, DTK in the name of the leftist-oriented Kurdish nationalist movement and Huda-Par in the name of the Kurdish Islamist movement have to play on Islam and religiosity, that will turn Islam again into a significant political actor.