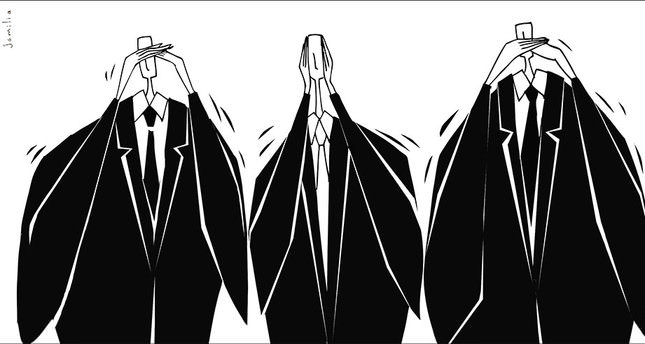 by Martin Jay May 22, 2014 12:00 am
A policeman knocks at the door and calmly asks you if he can come in for a chat; he then tells you that you have not broken any laws with the tweets you are writing about a political party, but that he and his colleagues would be very grateful if you could stop doing it.

Which country did that just happen in? North Korea, Iran, Syria, Russia or Egypt?

As an Englishman, it saddens me to tell you that it was my country, Britain. Amazingly, while European countries continue to enter the irony-free zone of preaching to so-called 'developing nations' about free speech, the alarming demise of this precious commodity seems to go unnoticed in our own countries.

Yes, you read correctly. British police this week tried to bully a blogger who was tweeting about a fringe British near-far-right party called UKIP, which has been getting a lot of press coverage of late as it is expected to take most of the Euro-MP seats in the parliament on May 22. Britain, like many EU countries, prides itself on its democratic values but it has lost touch with the electorate and the nanny state has taken over, slice by slice; overregulation and Tony Blair's consumerism-based policies have pushed freedom of expression off the page into what many might call these days into democracy's outer cosmos.

The shocking thing about British police trying to bully a tweeter into toning down his political rambling was not so much the event; but more the fact of how the press and 'civic society' reported and reacted to it. In the main, they didn't.

So have people in the U.K. just grown resigned to the fact that democratic values have been eroded? And that as a great nation with an imperial history, there was a period when people were passionate about it?

That's the thing about freedom: if you don't have it then you crave it like a love sick teenager. But once you have it, you neglect it like an old shirt you can't bear to wear. There's a lot here to blame on globalisation but few want to admit that it's also about weak governance.

We are living in a period where EU leaders are no longer elected for their dynamism or ability to make things happen. Rather, they are voted to not make things happen. And for a period of about 10 to 15 years, the naïve electorate accepted this 'new order'. But no more.

Not only are disingenuous leaders who make promises which they don't intend to keep on the back foot, but also the entire EU project. Next week, the European Union is expected to tremor as voters across the continent are expected to shake the mainstream parties' hold on Euro-MPs' seats in the European Parliament and vote in more nationalist parties. For the first time, this will mean that Brussels – a consensus-based model of power which would make most African autocracies blush – will have a sort of opposition; a voice of irreverence which holds the EU establishment to account.

Perhaps it might pry less into the human rights of countries on the periphery and examine Europe's own record on human rights and free speech? Or indeed the role of journalists to not only exercise their rights to report the truth, but to also do it without the risk of being captured, tortured and murdered.

It's not just that Europe's governments have an appalling record on allowing journalists their own freedom, but also how governments manipulate them and the truth.

Take as just one example the recent news of four French journalists being released from al-Qaeda groups in Syria. The news came to us, from a nicely embedded and cosy group of Elysée-accredited 'journalists' who all struggled to report that a German investigative magazine recently established that Francois Hollande paid $18 million for their release. They didn't even report, initially, that Hollande denied it.

The French and their relationship with both the press and terrorists organisations is a curious thing. And even more of an enigma is the French political elite. Francoise Hollande though is struggling somewhat of late with that old French art of the Elysée Palace: lying through your teeth to the French people.

And there's really nothing in his defence any more; he's been in office almost two years and he's still struggling to deliver strategic untruths on matters of state. Perhaps the writing is on the wall already as his ratings continue to tumble, the economy refuses to electrocute itself into life and unemployment figures just continue to climb: Hollande is out. And it's all about his lack of delivery of deceit to journalists who are already embedded so far up the presidential colon anyway, that none of them would even know a news story if it was sent to them inside their morning croissant. The French media is not exactly the abrasive style of journalism you see elsewhere, more your "in-house, support the state and government of the day with their spiel" kind of set up, where it is quite normal, nay encouraged, for hacks to sleep with government ministers.

Unbelievable? Perhaps but not as unbelievable as Hollande's brazen statement on the hostages. Unless of course you're one of those endearing people who believe that when it says 'white' on the side of toothpaste it actually means it will make your teeth whiter; or for that matter that low fat soda pop will actually airbrush away your manboobs leaving you with a chest that women will walk over dead bodies to admire in the frozen food section of Carrefour. If you're one of those, then probably you would believe M. Hollande when he tells a scuttle of press room wasters in Paris that he did not pay Al Qaeda terrorists $18 million of French tax payers' money to release four French journalists three weeks back. But wait. Perhaps he meant he paid more? Or that he doesn't even know the figure, is he that incompetent? And that press reports emanating from German investigative magazine Der Spiegel are all groundless and scandalous allegations, which he will pursue vigorously in the defamation courts.

But poor Hollande is so desperate to stop the haemorrhage of voters giving him the Gallic shrug, that you could almost forgive him for this latest stunt; in two years in office the only month where his popularity fell was when a French magazine spotted Hollande visiting a paramour on a moped, when his incumbent partner hadn't noticed that he'd not been home for crumpets by the electric bar fire for some months. Bien, oui

The message to voters, that the French leader still had lead in his pencil was at least reassuring to the same voter group who probably thought it quite correct for him just a few weeks ago to place his former lover in his cabinet of ministers. In some EU countries, that might have been considered a right royal cock-up. But not the Republic.

Funny thing about terrorist organisations is that journalists hardly ever ask the most obvious question about them: where do you get your money? All that hullabaloo must cost money, right?

And so it takes a German investigative journalist to 'break' the story that every hack in France knows: M, Hollande paid. Paying off terrorist groups to get French people back is largely a tradition. And cheap as chips for buying votes, one might add.

But the cost of this is 100 times more for nations like the U.K. [or the USA?] who don't pay ransoms to terrorist groups. Each time Al Qaeda is paid, it raises the price for the next group of misfortunate souls who crave the Aleppo by-line. If you 're curious to know where Al Qaeda get most of their money these days just google "hostages", "ransom" and "freed" and you will see three countries come up time and time again. Just two weeks ago, the French, a few weeks before that two Spanish journalists and four Italian journalists before them. Yes, that's right. The French, Italians and Spanish governments don't follow the British idea that if you didn't pay, then in time hostage taking would not prevail. Not at all. In fact, according to a recent investigative report in Forbes magazine, al-Qaeda in the Maghreb (AQIM) is a billion dollar 'organisation' run with the agonising discipline of a multinational company which has so much money that it has to bury stashes in the dessert in Mali. And all from hostage taking in recent years of tourists – mainly French – which is making AQIM so rich that it is taking the role of government in that it funds schools and builds hospitals to buy off any resistance to its ideology.

So next time you see reports from Syria with radical Muslim groups slaughtering citizens for having long hair – or indeed the news this week that shop mannequins have been banned by an Al Qaeda group in Raqaa - try hard not to think of spineless European leaders who are quite happy to accelerate the trade in hostage taking, just for a few votes. France's policy in Syria is simply to deliver bags stuffed with millions of taxpayers' dollars to Al Qaeda and close its eyes, while it indirectly funds radical ideologies which it then prevents its own journalists on reporting due to multi-million dollar bounties they are attracting. Indeed, the same radical Islamic groups just a few miles from the Turkish border, are getting rich due to morally bankrupt EU governments who just can't help but point the finger at Ankara.

Just this week, some journalists are calling on twitter for a new initiative from big media to create a one-fits-all insurance policy for freelancers working in warzones like Syria. But it should not be the media outlets who pay for it, in my view, but the governments who have so much blood on their hands and prefer the perceived truth as a currency of convenience to the actual one, like France where evidently freedom of speech is over-rated anyway.

*He is currently living in Beirut where he reports for Deutche Welle English and The Daily Mail (UK). @MartinRJay