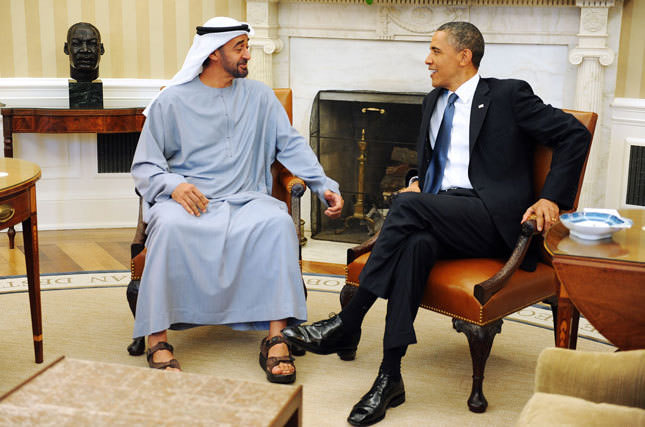 The UAE can be very shifty in its alliences. The recent shift in the UAE's policy on Iran is tactcial and temporary. It is unthinkable that Abu Dhabi will be able to develop a strategic partnership with Tehran without upsetting Riyadh

That the United Arab Emirates (UAE) is too closely aligned with the U.S. in its foreign policy is generally known. It is a key logistics provider to America's regional presence. What, however, is not so wellknown is that the UAE can be very shifty in its alliances. The UAE's troubled relations with neighboring Iran are a good way to understand how the Persian Gulf state conducts its foreign policy.

There are two key areas of the UAE's foreign relations: trade and security. While Dubai, the second-largest emirate in the seven-member federation, dominates trade issues, Abu Dhabi, the big brother capital and the largest of them all, uses diplomacy to control both internal security and external affairs. Foreign trade is vital to the UAE, which has huge petroleum reserves to take care of its small local population but the country must develop a viable non-oil economy that caters to the millions of foreign population.

The trading hub of Dubai complements Abu Dhabi's oil riches and together the ruling families of the two emirates enjoy punching much above their weight internationally. Security is an obsession with the UAE rulers as foreigners overwhelmingly outnumber citizens. Out of the country's estimated 9 million population just 1 million are citizens. This calls for a policy of zero tolerance for dissent in opinion. Their thinking is that if you concede even a micro-millimeter of space, it can be taken as a sign of weakness, a perception that can have fatal consequences for an authoritarian system.

I learned during my stay as a journalist in the Gulf emirate between 1997 and 2011 that officials there can be irrationally intolerant when people disagree with their policies even privately. They rudely shut people up in private gatherings. They had a mistaken belief that I was a cheerleader for Iran's ayatollah because I did not madly applaud their hard-line policy against Iran. The fact is I didn't feel comfortable borrowing the U.S. nonsense of Iran being evil or terrorist. The authorities must have taken notice of some positive business stories I did in the midst of noisy rhetoric against Iran.

Hostile posturing by George W. Bush and neocons in the U.S. against Iran was alarming and the UAE was key to whatever military adventure they were planning in the region. Talking to average people I didn't sense anyone was looking forward to a war with Iran. Even the UAE officials were well aware of the catastrophic results if Bush started a military conflict with Iran. But it is Washington that dictates the wider security policy of the region, and Arab "allies" just have to follow the Pentagon script. It is no secret that the Pentagon views the control of energy-rich western and central Asia as absolutely vital to its global domination. Manipulating small Arab states with docile populations is key to U.S. wars in the region.

Mind you, I didn't express such views very openly but only occasionally talked about UAE policies in private conversations when I worked there. In any case, the UAE's dreaded state security apparatus heavily monitors phones of journalists and keeps a wide network of informers to find out what people (especially those in media, government and finance sectors) say in private.

Dubai and Abu Dhabi do not seem to have a unified approach toward Iran. Goods and money flow between Dubai and Iran with ease. On the other hand, Abu Dhabi being a major exporter of oil, doesn't care much about the relative small amounts of money Dubai earns through its re-export trade with Iran. Prodded by Uncle Sam, Saudi Arabia and European powers, Abu Dhabi pursued a belligerent policy toward Iran for many years. Crown prince Mohammed Bin Zayed Al Nahyan is especially hard-line in security matters. During the Bush presidency in the U.S., the UAE became such a regional center of propaganda against Iran that even normal trade and tourism activities seemed like serious criminal offenses. Stuart Levey, the then undersecretary for terrorism and financial intelligence at the U.S. Department of Treasury, visited Dubai and Abu Dhabi to warn local companies against trading with Iran.

The level of rhetoric from the U.S. official was so alarming that a UAE cabinet minister contacted reporters to get details of his statements at a 2007 press conference. I mention these incidents to show how viciously Iran was being targeted not long ago. Iraq was already under Western control and they were salivating at the thought of grabbing another energy fruit in Iran.

An Iranian-born author connected with a Zionist network, wrote fiery columns in a local paper against the Iranian government and his word was considered sacred in Gulf Arab establishments. In 2008, UAE-based banks had mostly stopped issuing letters of credit for Iran trade amid escalating Washington-Tehran tensions.

This was happening despite:

Iranians being among top buyers of Dubai property

250 weekly flights catering to a heavy flow of people between the two countries
almost half a million Iranians living in the UAE.

Taking all this into account, it was deceptive on the part of UAE officials to indulge in too much anti-Iran loose talk. Now compare the dramatic changes in the UAE's policy since the U.S. and Iran agreed on a nuclear deal in November 2013. What official hocus-pocus will be delivered to justify this change of tack? The UAE has started pursuing Iran like a besotted lover at the highest level. UAE officials are almost begging Iran to be friends with it.

The UAE is known to frequently use its dispute over three islands in the Persian Gulf (historically and legally correct name) in piling pressure on Tehran at regional conferences.

What a ruckus the UAE caused when Iranian president Ahmadinejad visited one of the contested islands in 2012. The UAE government summoned the Iranian ambassador and called back its own from Tehran. Foreign Minister Abdullah Bin Zayed Al Nahyan held meetings in Abu Dhabi with ambassadors representing U.N. Security Council members to condemn the "provocative visit." Foreign ministers of the six-member Gulf Cooperation Council called a special meeting to discuss the row.

Now the same Abdullah Bin Zayed says, "Iran is a strategic partner with the UAE not only because of commercial and economic relations, but because of cultural and civilization links." Would the UAE officials mind explaining their reasons behind this epic policy change?

Abu Dhabi is yet to show it has a cohesive and long-term Iran policy so this shift looks tactical and temporary. Saudi Arabia exercises considerable influence in the Gulf security sphere and remains at loggerheads with Iran, so it's unthinkable Abu Dhabi will be able to develop a "strategic" partnership with Tehran without upsetting Riyadh.

Iran does have a lot to offer its neighbors if they can develop reliable partnerships. Greater regional engagement will make it a more reasonable country. Iran for its part has to prove that it can remain responsible even in serious situations. We all acknowledge Iran's rich cultural heritage, but its officials are better off not acting proud as a peacock when interacting with their Arab counterparts.

If the outsider U.S. has pursued disastrous policies in the region, playing one country against another, Iran also cannot escape its part in the violence and conflicts that have destabilized some places. Its ongoing support for the genocidal Assad war against Syrians is atrocious. If I were in the UAE today (hypothetically speaking because I'll never live in an Arab authoritarian state again), I would not be saying nice things about Iran's role in Syria's bloodshed and constant interference in Iraq. But then the UAE would be upset if you were out of tune with its fickleness and its new love for Iran.

* Shakir Husain is an Indian journalist. He spent 14 years in the UAE, working for Yahoo, Gulf News and The Gulf Today.
Last Update: May 27, 2014 1:45 pm
RELATED TOPICS