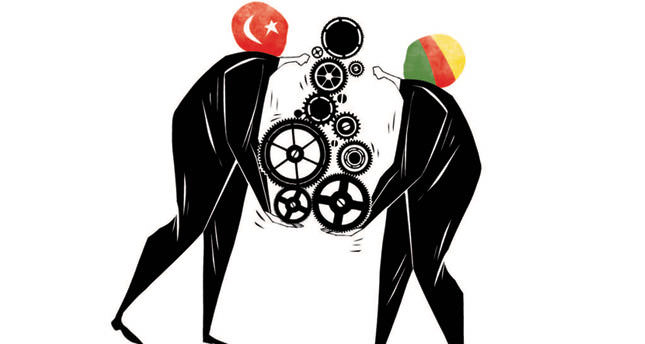 by Muhammad Waladbagi May 30, 2014 12:00 am
An oil tanker loaded with over a million barrels of Kurdish crude left Ceyhan port on Thursday May 11, 2014, making headlines all over the world. This is a brave step taken by Turkey and the Kurds who were very cautious to this point and had recently declared that oil pumped through the newly built pipeline between the Kurdistan Regional Government (KRG) and Turkey will not be sold without prior consent from Baghdad.

Disagreement between Baghdad and Irbil over management of the country's natural resources lies in their different interpretations for the constitution, an incongruity that has deprived the country of a hydrocarbon law so far. The dispute has become so tense in recent months that Baghdad started utilizing the budget card against the Kurds, delaying and halting the payment of Kurdistan's 17 percent share of Iraqi budget, creating fiscal problems for the KRG in paying employees' salaries and funding projects underway.

As expected, oil sales without the central government's approval immediately enraged Baghdad, which believes it is the central government's right to manage the oil sales and later distribute the income accrued. Oil revenues deposited in Halkbank in Turkey bestows Turkey leverage over the Kurds and therefore Iraq, and denies the central government its privilege of the budget card against the Kurds. That's why Baghdad acted promptly and filed a request for arbitration with the International Chamber of Commerce (ICC) against Turkey and its state-owned pipeline operator BOTAS just two days after the oil sale news was released.

Meanwhile, the reaction from Washington was not favorable as the U.S. State Department spokeswoman raised concern over the oil sale without Baghdad's approval. As for the American perspective, it is clear that following the 2011 withdrawal of troops from Iraq, Washington is more inclined to see the status quo preserved in the country and the region in an attempt to avoid any future involvement in regional conflicts and the consequent problems this may present for the U.S. In addition, Washington doesn't want to be accused by Arab states of fostering Kurdish independence and at the same time it may be wary of increasing Turkish influence and economic power, which can threaten the status quo as well as American interests.

As for Turkey's stance, it should be stated that the whole adventure became reality only through Ankara's blessing. Now, Turkey is supporting the KRG's claim that it is the region's constitutional right to sell oil and take its share of the Iraqi budget from the oil revenues. Ankara's decision is justified in terms of Turkey's need for energy, its desire to become an energy hub as well as an influential regional power, and its regional rivalry with Iran and her allies in the region, especially in Iraq.

The intentions of Ankara, Baghdad and Washington are briefly presented above, but an interesting and important question would be: What could be the reasons for this precarious move by the Kurdistan Region?

Certainly, whatever the ultimate aim of the KRG, it is obvious that its plan for building and developing domestic oil infrastructure and securing a place in the energy market aims at economic independence from Baghdad. This raises the question of why economic independence is of such vital importance for the KRG that it is ready to even ignore the discontent voices from Washington. A brief overview of the modern history of Iraqi Kurds and their relations with neighboring countries and Western powers can prove quite helpful in finding the answer to this question.

Since the establishment of Iraq as a modern state, Iraqi Kurds have fought for establishing an independent Kurdish state or at least guaranteeing their rights in an autonomous or federal entity. A major problem in solving the Kurdish issue has always been territorial dispute over the oil-rich areas of the north, especially Kirkuk.

In the 1970s, backed by Iran and through Tehran's mediation with Washington, the Kurds gained a short-lived autonomy from Baghdad. However, Baghdad offered territorial concessions to Tehran through the Algiers Agreement in 1975, which suddenly deprived the Kurds of both Iranian and American support. The Kurds did not admit to surrender to Baghdad's terms, in particular over the status of Kirkuk. Due to the fact that Kurdish Peshmerga forces with no regional or international support were no match for the Iraqi army that was well equipped with the wealth accrued through the 1970s oil boom, the Kurdish revolution collapsed in 1975.

The Kurdish struggle continued and Kurds succeeded in gaining de facto independence following Saddam's occupation of Kuwait in 1990, and later cashed in their independence for constitutionally recognized federalism after the 2003 war which led to the downfall of the Saddam regime. In this war, Kurds acted as allies of the U.S. and the coalition troops, and expected special treatment in return, something which did not materialize for the most part. Kurds have continuously been disappointed with American pro-Baghdad stances toward the status of disputed territories, including Kirkuk, budget rows between Baghdad and Irbil and equipping the Iraqi army with modern weaponry. The Americans were even eager to ignore Kurd's electoral merits, stirring Kurds to leave the Presidency post for a Sunni Arab; an event that did not materialize only due to Kurdish genuine insistence on their right for getting this post.

Their modern history and developments in the global capitalist economy has taught Kurds the following lessons that act as the basis of the KRG's decision for developing its oil and gas production and export infrastructure. First, Kurds have recognized that states make foreign policy decisions based on their interests, rather than moral principles or humanitarian issues. They remember how putting all their eggs in the basket of Tehran and Washington in the 1970s ended in disaster, as there was no material interest or any stake involved for these states to act on behalf of the Kurds. Hence, the KRG now wants to create a strategic mutual interest with Turkey, and through Turkey with Europe and the rest of the world. Meanwhile, the KRG is maintaining good relations with Iran and many other Arab countries and insists on respecting Iraq's integrity as far as the country's constitution is respected. Through creating strategic mutual interests with Turkey and building extensive strategic relations with regional countries as well as European states and the U.S., the KRG is attempting to avoid the 1975 catastrophe.

Second, through observing and analyzing recent developments in the region, Kurds have understood the fact that Western powers are more eager to accept the reality on the ground or the de facto reality and deal with it rather than try to engage in a pricy alteration of the status quo. This is the reason why the KRG is fervently trying to become a viable energy supplier independent of Baghdad and consolidate its control over the Kurdish territories in Iraq. The KRG is hopeful that this de facto economic achievement later turns de jure and makes future Kurdish dreams viable.

Third, Kurds have recognized the significant role giant corporations and firms can play in the international realm through providing stability and security for the regions and projects they are involved in. Following this logic, the KRG believes the Kurdish dream for economic independence is achievable through involving energy giants such as ExxonMobil, Gazprom and Chevron, and eventually securing its place in the energy market and getting enmeshed in the global capital market, as these factors guarantee significant support for stability and prosperity of the Kurdistan region.

Finally, the history of Kurdish engagement with governments in Baghdad since 1921 has proved that the Iraqi government is not a reliable partner and instead an independent economy is a vital pillar for granting Kurdish rights as well as the dream of independence. It was this fact that encouraged the Kurds to develop their oil fields and build energy infrastructure from the ground up. If Kurds were heeding to Washington's advice and were waiting for Baghdad to develop Kurdistan's oil sector, Kurdistan would be unable to drill or produce even a drop of oil, never mind export 100,000 barrels a day. The success of the KRG in the energy field and the political, military and economic pressure from Baghdad to further centralize the administrative authority in the country is evidence of the KRG's accurate understanding of the situation and its logical economic policy which will provide feasible leverage for Kurds vis-à-vis Baghdad.

Hence, it could be claimed that in spite of the apparent dangers involved in energy deals and engagement with Ankara, the KRG is determined to press ahead with its oil policy because the history of Kurdish victimization by Baghdad, status quo preserving and interest-oriented Western and regional policy toward Iraqi Kurds and demand and supply market economy necessitates such a policy. Meanwhile, the KRG knows that without vibrant revenue generating an independent economy it will remain at the mercy of Baghdad with no chance of fulfilling its future dreams.