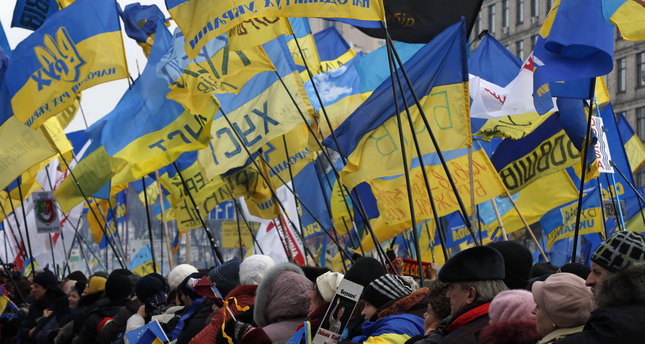 by Muhammet Koçak Jun 02, 2014 12:00 am
Ukraine achieved sudden independence after the demise of the USSR. The application of a common Ukrainian identity to its citizens was difficult, given the effects of the decades of Soviet nationalization policies. The economy of Ukraine remained highly dependent to the Russian Federation.

The Orange Revolution in 2004 was significant because Ukrainians pushed for integration with the EU, in pursuit of a new common identity in addition to economic and social change. However, their hopes were curbed by the pro-EU bloc's failure to handle complex political variables, which included economic dependence on Russia, the people's enthusiasm towards the EU, the bureaucratic legacy of the Soviet Union, and the election of the pro-Russian politician Yanukovych to the presidency. The realities of the country and the citizen's hopes for a new, bright future did not match. The protests that began after Yanukovych chose integration into the Russian-initiated Eurasian Union over the EU Association Agreement put an end to his rule.

The presidential elections that took place on May 25 were held during the most difficult period in the country's history since its independence from the Soviet Union. After Yanukovych fled Ukraine, the country has dealt with a difficult and complex agenda under the rule of an interim government. The occupation of Crimea by the Russian Federation gave the world an idea of the importance given by Russia to the region's former Soviet geography. The disappointing sanctions put in place by the EU, Canada, and the U.S. alongside Turkey's strong support to the rights of Crimean Tatars were by no means adequate for Ukrainians to feel safe under the Russian threat. Moreover, the activities of pro-Russian forces in the eastern provinces of Ukraine, which brought the country near a civil war, have further complicated the situation. The fact that Crimea hosted Ukraine's major ports, and the economic importance of the occupied Eastern provinces decreased the country's overall economic credibility. Combined, these variables frustrated the Ukrainians and decreased their hopes for the future. Therefore, the presidential elections were particularly important in the sense that they could provide a fresh start for Ukraine.

Although the elections did not take place in Crimea and turnout was low in eastern parts of Ukraine due to provocations by the pro-Russian militia, the atmosphere was peaceful in other regions. I was one of the election observers in Odessa, where over 40 anti-Kiev protesters were burned to death on May 2. The elections in Odessa took place in a peaceful atmosphere.

Although the majority of the youth did not vote, largely out of frustration and lack of hope for the change in the country, the result of the elections provides hints regarding the people's wishes as well as the country's future. The challenges that Ukraine has faced for the last six months deteriorated the social and economic conditions of the citizens. In line with that, the major hope for the elections was a new, strong leader who could get the country back on track and ensure stability. The victory of Poroshenko, the "Chocolate King," was not a surprise for most, but he was not expected to have a landslide victory that would not require a second round. Yuliya Timoshenko, on the other hand, who was largely discredited because of the gas deals she made with Russia and the corruption she was involved during her tenure as the prime minister lost against Poroshenko. Yanukovych's Party of Regions fell from power along with other right-wing parties. The failure of right-wing parties discredited Russian propaganda, which overvalued the effect of fascists and anti-Semites in Ukraine.

The speech Poroshenko gave to the press after the elections was promising. He said that his top priority would be to bring stability to the eastern regions of the Ukraine and promised for early parliamentary elections. He also left the channels open to Putin for improved relations and peace in the region. Although his speech raised hopes, his difficult agenda should be remembered. The situation in eastern Ukraine is getting more serious with increased casualties, and security forces and state institutions, which were largely corrupted during the Yanukovych era, have been unable to restore peace and stability thus far. As an oligarch, Poroshenko is supposed to ensure a functioning economy in the country. Most importantly, while the situation in Crimea is hopeless, Russian militias are advancing in Eastern Ukraine.

When I asked a Ukrainian voter about what he expects from the elections given the hard situation, the response was clear and summarized everything: "difficult but possible." With a landslide victory, Poroshenko ensured legitimacy, which should enable him to negotiate with Russia and help him to have control over the state institutions in the country.
RELATED TOPICS