Islamophobia, media and the echo-chamber effect 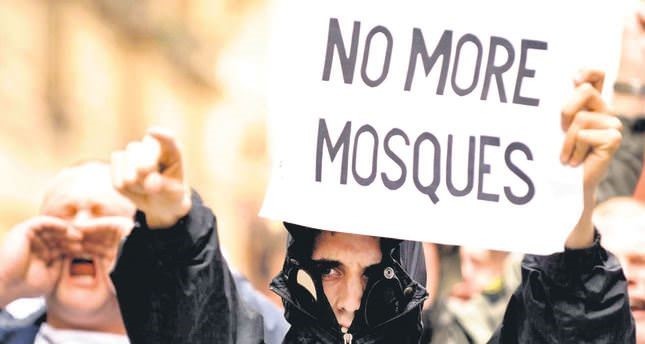 by Mahmut Aytekin Jun 02, 2014 12:00 am
"Sure, Islam is a religion, but at the same time it is a system of world government, and we have to recognize the two go hand in hand," stated Pat Robertson, chairman of the Christian Broadcasting Network. He continued his words on live American television: "Mohammed wanted to take over. They had jihad to conquer people, which they subjugated in order to establish their control. And that's what these people are doing, but it's horrible," adding: "We didn't have any problems saying that Hitler was bad. No problem at all saying the Nazis were monsters, no problem. We were fighting the Nazis, and our job was to defeat the Nazis, and everybody in America was mobilized to defeat the Nazis. ... Now we're fighting a war, but we refuse to identify our enemy [The Muslims] even though it's in plain sight."

A rule of thumb in psychology is the fact that we as humans do 90 percent of our thinking subconsciously and 10 percent consciously. So what would the effects of the above statement of the far-right Islamophobic Evangelical leader Pat Robertson be to the social order and adhesion of the general populace where different faiths live? The 700 Club show is just one of many televised shows within media spreading a phobia of Islam: Islamophobia. The common goal of these shows is to sow and lodge messages of hatred against Muslims and the religion of Islam in the subconscious minds of the general audience.

The attack upon Muslims and Islam within the arena of the media possesses a long history. A common starting point would be the works of Jack Chick. Chick in his works had continuously used the association of "pedophilia," "terrorism," "bombings" and other negative portrayals, falsely linking them with Muslims. Chick was the creator of a series of comic strips sharing anti-Muslim and anti-Roman Catholic sentiments. In his work "Where is Allah?" Chick portrays the Muslim belief of "Allah" as a moon god, falsely propagating the Islamic faith and also possessing an orientalist mentality. The arguments of Chick were stepped up even further; Chick had conveyed in his work "The Prophet," that the Prophet Muhammad was a creation of the Roman Catholics to annihilate the Jewish bloodline, clearly trying to hit two birds with one stone. His accusations were hiked up even more when he blurted out in his "Men of Peace" and "Unforgiven," associating a radical minority of Muslims with the majority, referring to the London bombings and disgustingly associated pedophilia with the Prophet Muhammad.

Moving along, another locus of the association of Islamophobia within the media would be the Fox Network. The Fox Network is known to be "Islamophobia in action" and has hosted many "experts" from the Clarion Foundation, an-anti Muslim organization that is known to spread Islamophobic fears to push security and foreign policies forward. The Clarion Fund is also known for the production of many Islamophobic materials including the Islamophobic movie "Obsession." The latest anti-Muslim security analyst hosted by the Fox Network was Ryan Mauro. Mauro indicated that "Muslim Patrols" were a threat to the United States of America and that "Jihadists were going to form an anti-American alliance in Syria." Brian Kilmeade of Fox & Friends alleged, "Not all Muslims are terrorists, but all terrorists are Muslims," evidently trying to use some sort of reverse rhetoric to associate the acts of a minority group to the majority of the followers of the Islamic faith. Fox news regularly hosts anti-Muslim, Islamophobic guests including the anti-Muslim author, "Atlas Shrugs" blog owner Pamela Geller, "ACT! for America" group founder Brigitte Gabriel who had lobbied for anti-Islam bills in Arizona and Tennessee and lastly, the so called "Islam expert" Robert Spencer who is the founder of "Jihad Watch," an influential blog possessing biased anti-Muslim sentiments and is known for its delineation of Islam as a violent and bloody faith.

The Public Religion Research Institute in their report had discovered that "Trust in Fox News is highly correlated with negative attitudes about Islam. More than two-thirds (68 percent) of Americans who most trust Fox News for their information about politics and current events say that the values of Islam are at odds with American values. In contrast, less than half of Americans who most trust broadcast network news (45 percent), CNN (37 percent) or public television (37 percent) agree that Islam is at odds with American values" and continued: "Americans who most trust Fox News again stand out. A majority (52 percent) of Americans who most trust Fox News believe that American Muslims are attempting to establish Islamic law as law of the land. Less than one third of Americans who most trust broadcast news networks (28 percent), CNN (20 percent) and public television (23 percent) agree with this statement." An echo-chamber effect can be observed with the statistics above. An echo-chamber effect by definition is usually when online users have their own beliefs "echoed" back to them, which then affects their belief systems. This echo can also be seen with the far-right evangelical leader John Hagee trying to echo back the statements of Jack Chick within his sermons and his book "Jerusalem Countdown" (2007). In terms of the media, it is the false propagation of news through one layer, which is then conveyed, repeated and propagated again to the general public that generally distorts most news, facts and figures. False propagation is purposefully used by various media cooperation's such as Fox and the Christian Broadcast Network to cause this effect within the general population, as the statistics above convey to us.

This effect is caused in many ways, but the three most used methods by media cooperation's conveying Islamophobia are: Labeling minority terrorist groups as the majority of Muslims, such as al-Qaeda, the Islamic State of Iraq and the Levant (ISIS) and Boko Haram; the repetition and association of terms like Muslim, Arab, Turk with words such as suicide bombing, terrorism, 9/11; and for various Islamophobic authors, bloggers and security analysts, referring to each other as "experts" and propagating each other's work.

With the echo-chamber taking place, a non-Muslim individual, through the anti-Muslim propaganda that he has received via various media sources subliminally and subconsciously usually observes individuals of the Islamic faith as an enemy. This was one factor that could be seen with the Norwegian psychopath Anders Breivik, heading the Norway attacks in 2011 that killed 77 civilians and injured another 209 civilians.

Before Breivik had executed his attacks, he had released a manifesto of approximately 1,500 pages, "2083: A European Declaration of Independence," in which many Islamophobic authors were sourced. Some of the names sourced were Robert Spencer, Pamela Geller and Bruce Bawer. Is it a coincidence that most names sourced were also featured on Fox, Fox News and Fox and Friends many times? The echo-chamber effect has stepped up a notch with the ideology of Anders Breivik spreading as an obsession, as John Roddy and Tobias Ruth were sentenced to be sent to a Young Offenders Institution for two years and nine months due to both writing graffiti on mosques and sending hate messages to various Islamic centers. Both teenagers had stated they were great fans of Anders Breivik and were part of the Knights Templar.

The populace of the West should be aware of the effects of media that spark Anti-Muslim hatred amongst individuals. According to an FBI report, hate crimes towards Muslims had increased 1000 percent since 9/11, the major causes of this being the public being subliminally shelled with anti-Islam messages and the public subconsciously being made to identify and lock-in the enemy as being Muslims. Every individual should realize the Islamophobic techniques that are being used within the media and should not give into the false accusations as peoples of all faiths have been living together in peace and harmony for almost 1000 years before a shift of the balance of power had taken place amongst global playmakers. Individuals and institutions are trying to have individuals within society literally "break each other" to fulfill their financial and political agendas, mostly with foreign policies regarding the Middle East. The denizens of the world should spoil the negative agenda's these institutions and individuals possess. They should not fall into their games and accusations with the echo-chamber effect created by them as the famous lyrics from "Down Under" acknowledge: "We are one, but we are many, and from all the lands on earth we come. We share a dream and sing with one voice."

*Researcher at the IHH Social and Humanitarian Research Center