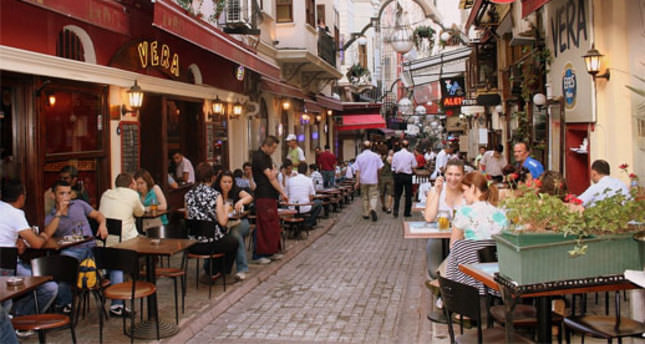 by Ergin Yaman Jun 04, 2014 12:00 am
Portraying the co-existence of different world and political views as polarization is an unethical act of twisting and distorting the evolving pluralism of Turkey. And stipulating that this, fabricated, polarization can only be diffused with the re-constitution of "the old order" is in itself a despotic attitude that has failed to come to terms with the concept of pluralism. The irony here is that those who claim that there is polarization in Turkey are disguising their never ending will of imposing their values on others. This can only be described as sneaky authoritarianism.

The sad thing about this is the fact that this is done by non-conservative journalists, columnists, artists, lawmen and writers who see themselves as indispensable for the "bright future" of Turkey. Seeing this, one can't help but go back into the history of Turkey and look at who was complicit in the coups, one of which claimed the life of Adnan Menderes.

Unfortunately, it becomes clear that it was not only the army behind them but also there was always this section of people who never tolerated the idea of co-habiting with fellow countrymen who had a different worldview. Besides, this section of people are the ones who perhaps have been more exposed to democratic cultures and have greater links with the world outside of Turkey, which one would expect would result in a higher level of tolerance. On the contrary, the links with the outer world have been and are still being used by these section to gain support of international media and community with a hope to reclaim the old Turkey where only the voice of this section ruled. And so far the international media and community has not failed or disappointed them whilst one would have expected them to see their efforts as "disguised authoritarianism" or "lack of tolerance to diversity".

In most of European countries where diversity is promoted, such an effort would be classified as something on the periphery of discrimination and non-tolerance. But, unfortunately the media of European countries has failed to transmit these fine values when it has come to the concept of pluralism or diversity in Turkey. Instead, they have kept ignoring the emerging voices and diversifying society. Considering the improvements made, the fact is that Turkey has never been so plural. To give a couple of examples; the polarizing Kurdish conflict which claimed the lives of hundreds of thousands of Turkish citizens was resolved over a year ago and this has led to an atmosphere of peace in the whole country because since then no lives have been lost due to this conflict. But, strangely enough Turkey is still more polarized than before. Heaven knows why?

In addition, the headscarf ban deprived thousands of young Muslim girls from their right to higher education for over a decade and as a result, had a polarizing effect between the conservative and non-conservative section of the society. Fortunately, this diabolical implementation was lifted about a year ago. This again has contributed to the diverse nature of Turkish society.

Therefore, the Kurds and conservative people that have been given space in social, political and economic life have not polarized Turkey but diversified it. This diversity is seen everywhere. For example, flying 10 years ago was a mystery for many people in Turkey but with increased air transport and economic tickets, taking a plane is like taking a bus. Similarly with high speed trains, people from all spheres of life are sharing the same carriages. So, those who really are interested to see whether Turkey is diversified and pluralized as opposed to polarized could ascertain this easily by taking a domestic flight or high speed trains.