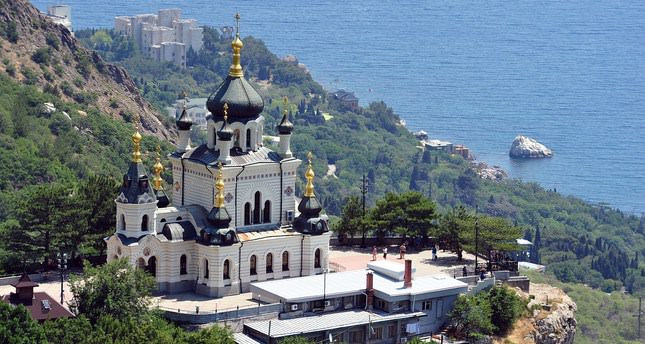 by Serhan Ünal Jun 05, 2014 12:00 am
Russia's de facto annexation of Crimea has proven that interdependence between importers and exporters of energy is weaker than thought; in fact, importers are more dependent on suppliers. The debate on energy security can be approached from two main perspectives: supply and demand security. By combining these two perspectives, it is common to argue that there is interdependence between Russia and the European Union, and between Russia and Turkey.

Interdependence corresponds to a specific type of profitable relationship between parties in which both sides are deterred from harming the other's interests and favors maintaining the relationship. The main underlying motivation is usually mutual economic gains. Similarly, when it comes to Russia-EU and Russia-Turkey relations, supporters of interdependence claim that energy trade is so vital for both sides of the business that neither side can afford risking relations.

Indeed, Russia is significant for both the EU and Turkey in a number of issues varying from international security to regional stability. For energy, this significance is more explicit since the EU's dependency on Russian supplies is around 32 percent and 35 percent in natural gas and oil, respectively. These rates are 58 percent and 11 percent for Turkey's dependence on Russia. On the other hand, the EU and Turkey's combined shares constitute 79 percent of Russian gas exports and 80 percent in oil. Moreover, 72 percent of Russia's total exports are energy exports which amount to $260 billion. In theory, these figures sign to a strong interdependence as if none of the parties could risk the relationship due to its enormous volume and strategic importance. Yet, in practice, the Crimean crisis has shown that Russia is not sufficiently deterred from violating international law and from harming the interests of providers of its energy demand security.

When the events in Ukraine escalated, nobody anticipated that Russia could annex Crimea. The expectation was that economics would again outweigh politics, and thanks to interdependence in between, both Russia and its opponents would contain the conflict spontaneously to sustain their gains from the energy business. However, despite the high share of the EU and Turkey in the demand for Russian energy resources, Russia did not feel itself interdependent with them, rather it felt they were dependent on it. Proving this in a way, the other part of the interdependent relationship, the EU and Turkey, could do almost nothing to respond Russia's aggressiveness.

Thus, it can be argued that dependence of energy importers on exporters continues. This situation principally arises from different substitutability levels of energy and money. Russia, with its assets like the National Stabilization Fund exceeding $150 billion has some options to resist international sanctions for a considerable time. Still, capital outflow which is expected to climb to $70 billion to $80 billion by the end of 2014 according to the Russian Ministry of Finance, may pressure Russia. If the EU can impose new sanctions as harsh as the U.S., which acts relatively more freely thanks to its lower rate of dependency on Russia in any area, the situation may worsen for Russia. However, this does not seem possible due to the EU's high energy dependency on Russia. In order to relieve the EU from its energy dependence, the U.S. can use its booming oil and gas production and lift the ban on oil exports, which is a hot topic of debate in energy circles. Yet, these options are not expected to be applicable in the short term.

The EU's energy dependency cannot be totally halted; it can only be restructured with non-Russian supplies. In the short term, putting an end to the reliance on Russian sources does not seem plausible; even if it were, Russia is equipped with the necessary capabilities to resist and protect the consequences of the annexation of Crimea. Only in the medium or long term may Russia exhaust its necessary capabilities to sustain its position. This supports the initial point arguing that dependency of importers on exporters continues; if it did not, the EU and Turkey could have taken some noteworthy measures against Russia.

All these debates on the Crimean crisis prove that energy interdependence between importers and exporters does not always work perfectly. When it comes to the vital interests of states, what works is deterrence. Correctly calculating the EU and Turkey's inability to deter it, Russia moved against interdependence. Thus, ineffective sanctions from Turkey and the EU following the fait accompli have proven that Russia, as an energy exporter, has the upper hand in this particular interdependent relationship.