Deadlock of the world powers: Turkey and Ukraine 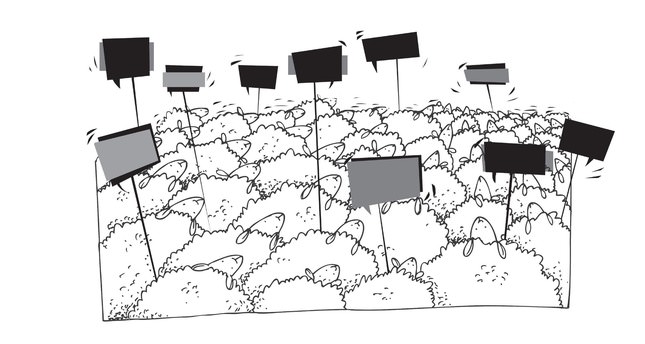 Turkey and Ukraine, even though the results differ from each other, they are both countries with schemes plotted against them failed and the equations broken

World powers have not given up on carrying out social "experiments," which, they think, would best serve their interests. Indeed, human geography is considered an experimental field for political and social theories produced by U.S.- and EU-driven think tanks. Countries fighting against social, political and economic inabilities are treated as neutral elements in these experiments. The countries are put in a stranglehold outside of social requests and their own political realities. Opposing and objecting political cadres and groups are tried to be "chastened."

It is all the same scheme

When different periods are examined, it can easily be seen that it is the same scheme that is being plotted. It includes having demonstrations organized that are built upon "innocent" demands that have a disintegrating nature and that ignore general society, getting this "innocence" across to large audiences, conveying misinformation, making events that never happened seem as if they actually happened and manipulating the truth via traditional and new media channels; stirring up the nerves (sensitive issues) that will trigger social polarization; making the embassies of the countries party to the scheme, serving/acting as intelligence and PR centers; running defamation campaigns against the managerial cadres of the country where the scheme is implemented; placing discourses such as "the man suppressing innocent demands," "the leader going against freedom of thought and freedom of expression," "the government is oppressing the public" and "the dictator," which are reciprocated by the Western centers that are at the center of these defamation campaigns.

Turkey: a country breaking the equation!

It is apparent that there exists various reasons for each targeted country. However, the underlying reasons for Turkey being a target are quite clear. Those reasons include Turkey's increased efforts to be a decisive factor in its own geopolitical region; the acknowledgement that the Kurdish issue, which is used by the Western centers in shaping Turkey's domestic equations, as a domestic problem and seeking the solution domestically and unwaveringly; the loud expression of criticisms about the U.N.'s controversial control and management by Turkey; Prime Minister Recep Tayyip Erdoğan's expressing aloud the terror employed by Israel that is "used" as an anchor by the countries giving direction to global politics in order to shape the Middle East; along with economic growth, entering into markets controlled by Western countries and breaking the equations set up, which is to their disadvantage.

Turkey, through the integration of a large part of society and the strong leadership governing the country, destroyed the scheme set up against it. Moreover, the alliances, which have become increasingly clearer and come to the surface, reveal how dirty the scheme plotted against Turkey is. The alliance between those who pretend to be supporting the solution of the Kurdish issue and those who explicitly declare that they are against the solution; deviation to the extent that they make election propaganda for political formations that they considered as "non-religious" until yesterday; the cooperation of those who hope to benefit from anti-Erdoğanism; the partnership of those who hope to benefit from the opportunities provided by the Western centers; the alliance of those acting with a sense of "minority fascism;" and meetings of those claiming to be liberal and those who are nationalists at a common point…

Despite all the alliances established, the Anatolian people have been continuing to disrupt the scheme plotted against this country's future since 2007. The results of the March 30 elections are a manifestation as regards the continuation of this commitment! Nevertheless, it is not possible to say that the global schemers have given up on their plots about Turkey. However, their great astonishment cannot be concealed! Yet, we should not let this astonishment deceive us! Turkey, on the one hand, must continue to proceed on its way with determination, and on the other hand, must be prepared for any potential new "attacks" that may come. It is because of this, that the willingness of those hoping to benefit from these methods by seizing power rather than from the results of the ballot boxes is not likely to fade away easily!

The horizon of an irreversible night (the point of no return) or Ukraine! Ukraine has become a country where the theoretical social design projects produced in the deep gathering places of the Western world were proved to be ineffective and where those staging the scheme failed. We are watching a movie, the beginning and end of which are obvious! Efforts are made with a view to realizing the project that has been tested in many countries. In the first phase of the project, it was thought that success was achieved by overthrowing the government. However, as a result of the steps taken by Russia, those efforts ended in frustration/disappointment. Not only have they lost, but they are making the world watch a country's breakdown and being driven into a civil war as well. As regards the "deep centers" that have no ability other than plotting schemes, they are watching the failure of their dirty scheme in despair! That is what happened in Ukraine! Those who do not hesitate shedding blood in areas with Muslim populations and weak governments are in desperation before Russia! They are seeking a solution by imposing an economic embargo.

Old answers to new questions… As regards this dirty scheme, it is possible to ask dozens of questions, the answers of which we are curious about. If you please, let us reiterate the questions whose answers we already know: (1) Will the Western countries that face failure concerning the schemes plotted against Turkey and Ukraine, learn a lesson from what has happened? (2) Will they continue to deceive innocent people by persisting in being attracted to the temptation of social design projects which they discussed on the table? (3) Will they learn to respect the public's will arising from free elections? (4) Will they put an end to their recklessness about implementing results, which they do not wish for their own countries, for other countries? (5) Will they try to respect other countries' sovereignty rights? (6) Will they give up on their efforts to create a perception about countries, societies and leaders through unrealistic information? (7) Will they include establishing a relationship of equals between the countries on their agenda? (8) Will they be able to refrain from making categorical discrimination with respect to human rights and freedoms? Making "the admonishers" who are far from social reality face these kinds of questions is precisely what needs to be done at this point. It could prove useful to accomplish this by means of Turkey, which made their scheme fail, and Ukraine, which is going through a breakdown. Furthermore, the Western world might be deluded as far as procrastinating with regard to their own internal problems by the habits they has pursued so far. However, they need to realize that with these unfruitful schemes, they put their own future on the line!