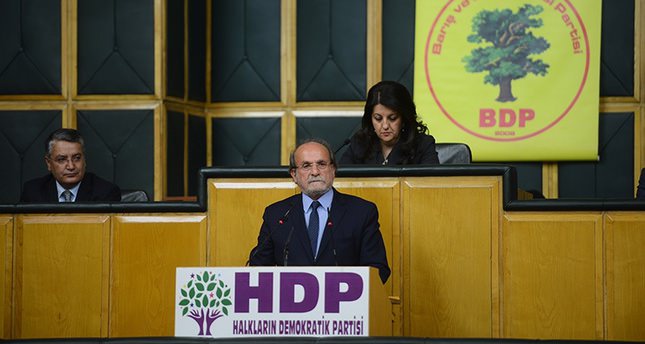 by Rahman Dağ Jun 06, 2014 12:00 am
The legal Kurdish political movement has always preserved its leftist (currently and arguably social democrat) feature since the 1990s. By that time, there was a platform, called the New Democratic Formation, consisting of Kurdish and Turkish co-ideologues, immediately after the resignation of Kurdish deputies from the SHP (Social-Democrat Populist Party, led by Erdal İnönü) with the accusation of being supporters of the secessionist PKK, as some of them attended a Kurdish Conference in Paris. The fundamental connection of those who formed such an initiative was the belief in socialism (all variation of leftist understanding) as the path heading to peace between Kurds and Turks. The dominance of Kurdish ethnic identity gradually excluded Turkish counterparts over time, and the first Kurdish ethnic-right-centered legal political party unofficial and practical level sided with the line of the PKK – at least that was the major perception within the politics of Turkey.

The HDP (Peoples' Democratic Party) can be considered as a recent equivalent of the previous initiative. It might remind us of the leftist movements in the pre-1974 general amnesty when there was no division between Turkish and Kurdish leftist movements. Interestingly enough, the HDP, based on interviews with Sabahat Tuncel, the co-president of the party, has a new argument, which is totally different from the historical experience of the left. It suggests the inclusion of conservatives, to state explicitly, religious individuals or Muslims, within their ranks and policies. Considering this argument together with the Holy Birth Meeting (Prophet Muhammad's birthday) and the Democratic Islam Congress, undertaken by the Democratic Society Congress (DTK), this argument makes sense. Yet, it has to be strategically analyzed, otherwise its leftist-orientation might cause it to lose the relatively conservative electorate of the Kurdish nationalist movement. That the BDP and the HDP's vote percentages were counted together in the last local elections helps in coming to the conclusion that this co-operation did not increase the total vote percentage but remained in place at 7 percent at most. Therefore, the impact of such an initiative allegedly contending every part of society in Turkey should be questioned.

Abandonment of identity (Kurdish ethnic rights) politics and embarking on a leftist discourse as a standing point might degenerate the existing electoral base for legal Kurdish-centered politics. Because of such a possible result, despite the fact that all BDP deputies switched to the HDP's ranks and formed a political group in Parliament, as a precaution, the political presence of the BDP was not ended. What seems to be problematic here is that the legal Kurdish political movement plays upon both leftist (being an actual social democrat political party) and religious identities at the same time. Regarding ideological cores and historical prejudices between the right and left, it is a hard way to go.

Whether or not the HDP as a distinctive initiative would be successful or not or have the resources and capabilities to proceed in either way, its political spectrum and discourse would play a crucial role in terms of a possible result. Being comparatively leftist-oriented might cause it to lose electoral support to the Justice and Development Party (AK Party), Huda-Par or the newly formed KADEP (Participatory Democracy Party), which would make it quite hard for them to regain their support. On the other hand, the credibility of the legal Kurdish nationalist movement gained through three decades of struggle might provide it with a considerable amount of time to consolidate its electoral base. If the peace process ends with a positive result, Kurdish identity politics would not be adequate to sustain their existence; so playing upon both socialist and religious identities would determine their new path in accordance to which identity outweighs the other in the forthcoming years of politics. In conclusion, the legal Kurdish nationalist movement is preparing itself for the post-peace process period by playing all its hands and utilizing all its resources for the sake of that. Even the concept of "cultural Islam," which was emphasized by Abdullah Öcalan via the letter he sent to the democratic Islam congress, can be taken as proof of that. The KCK, BDP, PKK, DTK, HDP and any other socio-political organizations that are directly or indirectly related to the legal Kurdish movement have taken a risky path by playing on both seemingly separate identities. Yet, still there is a chance to succeed.

* Director of CESRAN Turkey Desk and PhD from Exeter University