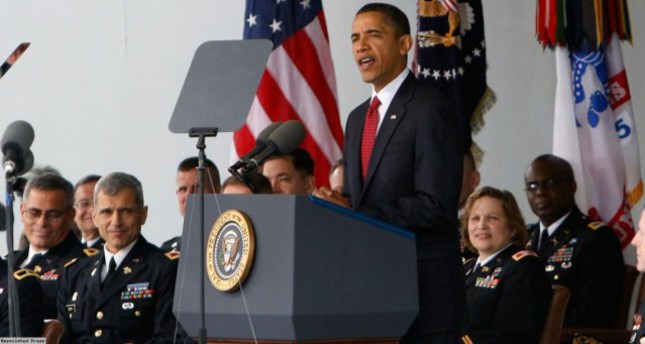 by Kadir Üstün Jun 10, 2014 12:00 am
President Obama's commencement speech at West Point was criticized by many from the right and left for failing to outline a foreign policy vision for the remainder of his term. The address revealed that the president intends to continue his administration's minimalist approach and emphasize multilateralism in issues of global concern. U.S. foreign policy in the Middle East has implications for Turkey as a regional stakeholder with specific national security interests in Syria, Iraq, Iran and beyond. President Obama's references to confronting terrorism and supporting the Syrian opposition, in particular, will have direct implications for Turkey's Syria policy.

Much of the president's speech was aimed at defending the administration's past policies within the general framework of "more internationalism and less unilateral military action" to demonstrate U.S. leadership around the world. Obama's address clearly showed that his administration is still haunted by the legacies of the Afghan and Iraq wars. Making a strong case against rushing into military interventions that could take the U.S. into unfamiliar territory with unforeseen consequences, the president emphasized a multilateral approach to global issues that do not pose a direct threat to the U.S. The president promised a $5 billion fund for U.S. allies to counter al-Qaeda and its affiliates and pledged to support the Syrian opposition as an alternative to terrorists and a brutal dictator.

The promise of support for the Syrian opposition should be welcome news for Ankara, which for some time has been advocating for a robust effort to empower the opposition. However, training and arming the Syrian opposition would have been much more effective in 2012 and 2013 in ensuring that the opposition was able to hold territory and push forward toward regime-controlled areas. It would have also helped to deter al-Qaeda-affiliated groups and prevent them from taking hold. Going forward, support for the opposition has to be much more robust and comprehensive to make a serious difference.

Turkey has long been frustrated by the lack of strategy among Western allies to address the challenges posed by the Syrian conflict. The hyper-focus on terrorism and chemical weapons has taken priority for the West, deterring an expansive involvement in supporting the opposition. President Obama's speech promised to limit the administration's focus in countering terrorism and create an "alternative" by supporting the opposition. This minimalist approach revealed little in terms of what the administration's Syria policy will be. If it remains a lowintensity effort to help the opposition stand their ground against al-Qaeda and the regime, it will almost certainly fail to bring about the needed political transition or eradication of terrorism in Syria.

The president's speech emphasized multilateralism in confronting global challenges in an era when emerging powers are asking for more representation in multilateral institutions. This is especially true for Turkey, which in recent years has raised its profile in international platforms and sought larger roles in global governance. In this sense, the president's multilateral approach should be welcomed by Turkey. However, if multilateralism becomes a substitute for an absence of U.S. policy, it will become problematic, as regional players like Turkey cannot gauge the administration's exact intentions. This was evident last year when Obama backed away from the decision to punish the Assad regime for using chemical weapons, creating widespread confusion and misperceptions about U.S. policy. If the U.S. is increasingly seen as an indecisive power in the region, multilateralism will do little to build an international effort that will achieve results. Nevertheless, if Obama means to work with allies like Turkey to bring an end to the Assad regime (the stated policy goal of the U.S. and Turkey) and push for a meaningful political transition by empowering the Syrian opposition, then there will be great room for cooperation.

Multilateralism, in the absence of a clearly articulated policy goal and willingness for international leadership, will not achieve results by itself. While the Obama administration's shift away from the unilateralist and hawkish policies of the Bush era has been positive for Turkey and the region, the increasingly minimalist and hesitant U.S. attitude toward regional issues has prevented high levels of cooperation between the U.S. and Turkey. If efforts to counter terrorism and support the Syrian opposition are not designed according to broader policy goals, they are less likely to be effective in providing a solution to the Syrian conflict.

* Research Director at the SETA in Washington D.C.