The problem with Turkey's security dilemma 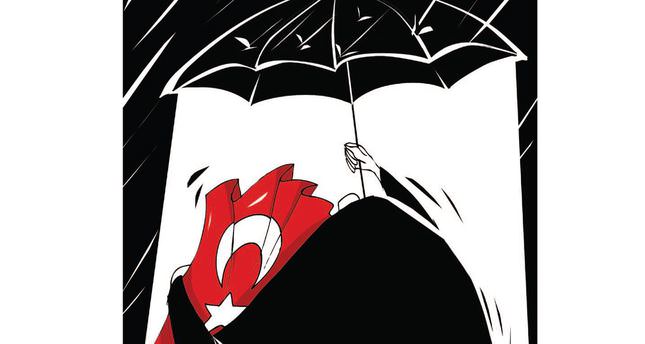 The Justice and Development Party (AK Party) has elective legitimacy and clear public support, yet not well represented in other sources of power

Once upon a time there was a state in Turkey. It was neither fair nor free. But it was poor, nasty, brutish, evil, illegitimate but hierarchically organized and predictable. At least we knew that it was like a sword swinging around that would cut anyone who rejected obeying its certain bureaucratic orders.

Any group of identity, which produced some level of resistance or attracted enough attention, was forced to obey the rules of state authority through the use of some authoritarian methods. With no exception, all political movements in the country one by one faced that authoritarian use of the state sword. But right now it seems that none of the political actors authoritatively holds the sword, and it swings around randomly, creating a security dilemma for all in which nobody feels secure just because it can cut both ways. Therefore, society is experiencing an insecure transformation process that is characterized by the so-called security dilemma, not some sort of tyranny, as claimed recently by some commentators on Turkey. Let me explain why and how it works.

The deep and strong state of the previous order was demolished by grass-root movements. Recep Tayyip Erdoğan, as the leading figure of not only a political but also a socio-economic revival, overcame that onesided state authority by bringing large groups of society to power. This resembles a total revolution in Turkish politics that rebalances state-society relations. Now we are in a transformation process in which the hand holding the sword is blurred, and the target of the sword is vague. Political order in Turkey right now represents the truly harsh conditions of a state of nature. The old order is dead, but the new one is still under construction. The rules of the next state hierarchy will be defined as the outcome of a harsh struggle under the rules of revolution that can be quite like a war, as we know from the history of revolutions. Again we tend to think that partners in winning coalitions in previous wars become new competitors. In this struggle to shape the future of the country, all political movements try to avoid losses and get as much as possible.

For a long time, commentators on Turkish politics have been claiming that Erdoğan was turning into a dictator. However, recent events show that he and his party have no such unlimited power. Right now it is quite clear that his rule has always been vulnerable to organized political groups that are able to enter even his closest circles and even record his private conversations and high level meetings. This picture does not resemble a controlling power, but in fact shows that the hierarchy of the state in Turkey is not running properly. Therefore, any analysis trying to explain Turkish politics has to start from the assumption of anarchy, which means the lack of a central authority. In fact, what looks like single man rule is just an illusionary appearance that hides the real power relations in the country. The newly emerging civil power center of Turkey is having difficulty grasping the hilt. The Justice and Development Party (AK Party) has formal power, elective legitimacy and clear public support. However, it is not well represented in other sources of power like bureaucratic organizations, media and academia, since it takes generations for a socio-economic group to reach that level of power. Therefore, it holds the legitimate tools of government, but as indicated by recent events, fails to efficiently operate those tools. The lack of that efficiency creates niches of power filled by different politically organized movements that can be lethal for the governing party. State hierarchies are sustained by operating punishment and reward procedures.

But under conditions of the security dilemma, as observed recently in Turkey, the state cannot operate those procedures, and as a consequence, targeting the formal government becomes uncostly. If other centers of power in society cannot be deterred efficiently, the government in the long term may experience a loss of credibility in defending its own interests and political agenda. In this way, Turkey slides into a degenerative process of chaos. Erdoğan has to promote a method of deterrence and also of coercion, if possible, in order to protect not only his own rule but also Turkish statehood.

Otherwise, the recent turmoil seems more like a "failed state" image unable to control society. The only available tool that remains in the hands of the AK Party is the public support that can be successfully rallied via Erdogan's rhetorical power. Aware of that fact, the AK Party, in order to secure its position in this struggle to control the government, relies upon Erdoğan's charisma and speeches. But rhetorical power comes at the expense of an image problem both in the country and abroad. In fact, this is defensive behavior produced to secure the government and rule by rallying electoral support. Observers viewing just the appearance level rather than attempting to discover the reality do not hesitate to declare that Turkey is governed by authoritarian rule. Surface level empirical data deludes observes due to a lack of theoretical knowledge.

However, this is a paradoxical situation for Erdoğan. In order to protect his political survival, he has to rally his supporters, but rallying supporters with powerful language is used to criticize his rule as anti-democratic. The recent elections certainly provided him with the opportunity to overcome that conundrum with less talk, more work. If he can use more moderate language, while he increases his governing abilities by reconstructing his other power sources, both Erdoğan and Turkey can survive this political turmoil. Otherwise we are all doomed to failure.

But under the conditions of the security dilemma, which emerges as a direct outcome of anarchic structure, one's increased level of security means the other's decreased level of security. Even though actors in Turkish politics speak a language of political survival and feel insecure, they all tend to view others' behaviors as offensive. An undeclared war becomes inevitable as an outcome of this security dilemma. There are two ways to overcome this security dilemma: relying on consent via consensus and producing consent by using power.

Unfortunately, consent in history has never been produced by consensus since consensus requires interaction, and under the conditions of the security dilemma, interaction produces war. None of the states in history were based on social contracts. They are in fact established by the most powerful actor, and the large gap between the powerful side and the others produces consent. It might seem distasteful, but it is the reality. Not interaction or consensus but wars produce rules and constitutions.

Enough power behind the rule renders those constitutions legitimate and produces consent. The law has never been and will never be the source of rule in the real world of politics. There is no natural law that is not established, enforced and executed without power. Law is an interim category made by humans for governing purposes. Like it or not, all laws are dependent upon their formulators. And all formulators bring their own perspective to the nature of that law, which has no effect without the coercive power behind it.

Therefore any search of consensus in Turkey is responsible for the recent anarchy and the lack of order. If Erdoğan, as the only potential actor to establish that rule, fails to fix the state authority, a long duration of anarchic order is inevitable. This is not to claim that Erdoğan should rule as a dictator, but he should be able to rightfully produce the mechanisms to monopolize the use of violence in Weber's words, if we are to avoid war. The problem in Turkey is not authoritarian rule, but the lack of state authority.