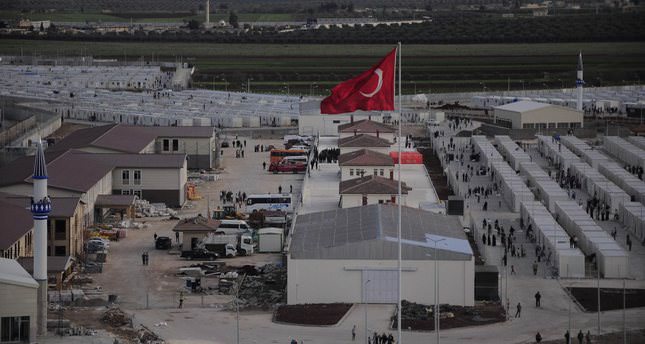 by Serdar Çelebi Jun 11, 2014 12:00 am
The so-called "Arab Spring" took place in different parts of the Middle East and North Africa. It started as uprisings calling for freedom from authoritarian governments.

During such events, in the name of power, authorities don't want to lose their control over the crowds, so those authoritarian regimes attempted to commit mass atrocities against their citizens. People who supported or participated in such events were treated harshly. One of the consequences of such actions is that people are forcibly displaced from their homes.

The civil war in Syria began in 2011 and so far the death toll has reached 162,000, according to Britishbased Syrian Observatory for Human Rights. The number of Syrians who fled their homes reached 2.7 million as of May 5, 2014. UNHCR expects this number to reach 4.1 million by the end of 2014. Lebanon, Turkey and Jordan have been hosting around 80 percent of all Syrian refugees in the region.
The United Nations Refugee Agency (UNHCR) is the agency primarily responsible for the world's refugees.

In the beginning, the agency's primary mission was to protect refugees on the European continent who were displaced by the World War II. UNHCR was globally mandated with the 1951 United Nations Convention Relating to the Status of Refugees. This agreement had two main constraints ("timing" and "geographical limitation") which were lifted later on. So far, the convention has been ratified by 148 countries worldwide.

The world's largest refugee population is made up of Palestinians. A separate agency, UNRWA (United Nations Relief and Works Agency for Palestinian Refugees in the Near East), was created to provide assistance and protection to 5 million Palestinian refugees since 1949. As of 2012, there were about 10.5 million refugees under UNHCR's mandate. In today's world, hundreds of thousands of people are forcibly being displaced from their homes as a result of events occurring in such regions as the Middle East, Africa, South East Asia and Latin America. In the Middle East alone there were about 4.8 million refugees registered in 2013. Afghanistan, Somalia, Iraq, Syria and Sudan are where the highest number of refugees come from as of 2013.

Most of the refugees migrated to Turkey in the early stages of the republic were Turkish speaking groups, Albanians, Bosnians, Circassians, Pomaks and Tatars.

The EU accession process of Turkey has been very influential on Turkish asylum policies. In accordance with EU standards, the Turkish government adopted the National Action Plan for Migration and Asylum in 2005. Turkey as a state party to the 1951 Convention and its 1967 Protocol has been one of four countries in the world that has been implementing the "geographical limitation" while admitting refugees. People who are migrating from the European continent are called as refugees, otherwise "guests." Other countries who apply to geographical limitation are Congo, Madagascar and Monaco. Syrians who have started crossing into the Turkish borders since 2011 are referred to as "guests."

Although Syrians have not been treated as refugees by the Turkish government, there have been some positive changes to Turkish asylum policies since the beginning of influx. Last April, a new migration bill entered into effect which is the most comprehensive migration law in Turkey's history, according to UNHCR.

With this law, the new Directorate General for Migration Management was established under the Turkish Ministry of Interior. According to the U.N. Refugee Agency, 1.3 million Syrians are expected to reach Turkey by the end of 2014.

Lebanon with a population of 4 million has been hosting around 1 million Syrian refugees as of March 2014. This number is expected to reach 1.5 million by the end of 2014. Refugees-host community population proportion is the highest among the other three. According to the World Bank, the cost of hosting Syrians has reached to $2.5 billion (TL 5.2 billion) so far and 170,000 Lebanese have been pushed below the poverty line. Lebanon is not party to the 1951 Convention and its 1967 Protocol and there are not even domestic laws and regulations to handle refugees' problems. Despite increasing tensions between the host and refugee communities, the Lebanese government agreed with UNHCR that they will not send refugees back to Syria.

Jordan has been hosting the third-largest Syrian refugee population in the region. Like Lebanon, Jordan is not a state party to the 1951 Convention and its 1967 Protocol. In order to operate in Jordan, UNHCR signed a Memorandum of Understanding with the Jordanian Government in 1998 which establishes the parameters for cooperation on providing protection and assistance to refugees and asylum-seekers, and allows mandate refugees a maximum stay of six months after recognition, during which a durable solution should be found.
For a country, being a state party to international conventions and agreements demonstrates the degree of integration to the global system. Countries who are parties to such conventions are held accountable by the international human rights and humanitarian laws. As a party to international agreements and conventions, the treatment of refugees in Turkey is the best among the other two.