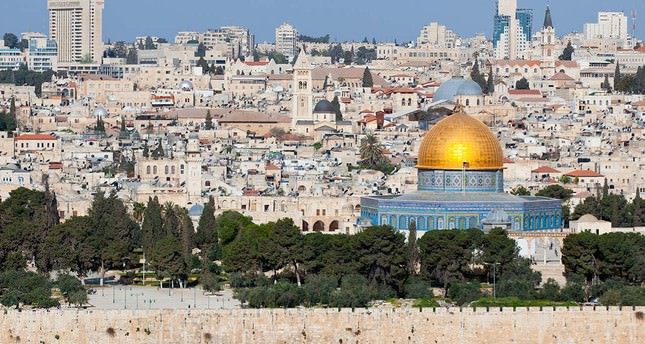 by Ido Zelkovitz Jun 16, 2014 12:00 am
Palestinian inner strife which started in June 2007 seems to be on its way to an end. The two major Palestinian parties, Fatah and Hamas, entered into deliberation after realizing that current geopolitical conditions will not allow them to achieve their own particular goals.

One can say that the Palestinian reconciliation process is also an outcome of the Arab spring. While in the Arab world the masses flocked to the streets and demanded the removal of tyrannous regimes, Palestinian city squares by and large remained quiet and empty. The only voices heard in the Palestinian public sphere were calls to end the intra-Palestinian division.

The failure of the Israeli government-PLO peace talks and the economic crisis in the Gaza Strip pushed the rivals into one each other arms. The announcement of future reconciliation between Fatah and Hamas could be described as one more initiative in the process of achieving a way out of the Palestinian political deadlock.

Turkey has emerged as a regional super power in the Palestinian reconciliation process. Hamas sees Turkey under Erdoğan's rule as a role model for a future Palestinian state. One should also remember that Turkey was the first country that recognized the legitimacy of Hamas to rule over the Palestinian territories after it won the election of June 2006 in a fair democratic process.

Chairman of Hamas politburo Khaled Mashal has a very good personal relationship with the AK Party leadership. On Sept. 30, 2012 Mashal was a guest of honor at the AK Party congress, alongside former Egyptian President Morsi. Since then, Mashal and Ismail Haniyeh, Hamas' prime minister in the Gaza Strip, held several meetings with Erdoğan on the intra-Palestinian reconciliation process and on Turkey's potential role as mediator.

Despite the strong personal relationship between Hamas and the AK Party leadership, the Erdoğan rule did not undermine Mahmoud Abass position as PLO chairman. The Turkish government declined Hamas' request to open a representative office in Ankara. By doing so, the Turkish government gave Mahmoud Abbas legitimacy in the Islamic sphere. That comes as no surprise. Historically Turkey was also one of the countries in the world that recognized the status of the PLO as the sole and legitimate representative of the Palestinian people in 1975.
As we stand days or hours from the establishment of Palestinian unity government, the stability of this government could function in more effective ways under Turkish sponsorship. There is a lot of sympathy in Turkey for the Palestinian street as Erdoğan has won the hearts and the minds of the Palestinians.

The Mavi Maramra incident, the crisis of the Israeli-Turkish relationship and warm hospitality that Turkey gave to ex-Palestinians prisoners that were released in the Gilad Shalit prisoners exchange deals make Turkey very popular among Palestinians.

If Turkey will be more involved in the Palestinian reconciliation process it can open a new window of opportunities in the region. The current state of Turkish-Israeli relations further hinders this position. Perhaps Turkey can play the role of mediator between Israel and Hamas. Even though Israel perceives Turkey as a dishonest broker, and as a hostile state, if Israel were to ask Turkey – which is a regional superpower – to play the role of mediator between them and the Palestinians, it could be the beginning of building a new trusting relationship between the parties.

There is a great a need for Israeli-Turkish reconciliation in these days of regional instability. Both countries are aware to the ramifications of the Syrian civil war and don't want the violence to cross their borders. There are also new economic factors that can pave the way for renewed Israeli-Turkish relationships that will be based upon strengthened mutual interests. Israel is important for Turkey. The Turkish Industry and Business Association identified Israel as a priority investment partner. Turkey is important for Israel in terms of creating a sphere of regional stability. The discovery of the Israeli gas field and the Turkish need for this energy can boost ties between the sides and be the base for a new treaty that will combine all of the elements that were mentioned before.

The Arab Revolutions created a new Middle East and there are new challenges and opportunities. It is a time for a fresh start, for a period of hope, for a quiet and secure life. Israel and Turkey as regional powers should create a new and stable environment of peace, not only for its own citizens, but for all of the people of the era.

*Dr. teaches in the Department of Middle Eastern History and is a research fellow at the Ezri center for Iran and Persian Gulf Studies, University of Haifa.