The Nekba: The Intentional and Systematic Dispossession of the Palestinians 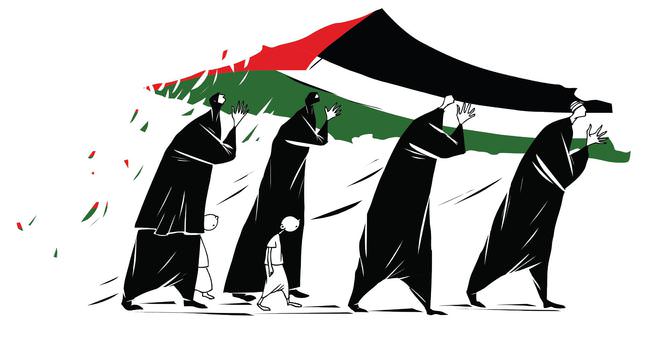 As the Palestinian Nekba's commemoration is upon us, the ever present Zionist denials, obfuscation and refusal to take responsibility for the intentional, deliberate and systematic dispossession of the indigenous population comes along with it. More critically, Zionist denial is coupled with a never-ending attempt to blame the Palestinian people, victims of a modern genocide while absolving the Israeli state of responsibility for past and present ethnic cleansing. A more sophisticated Israeli argument adorned in humanist terms, assigns blame to chaos emerging in the 'heat of battle,' past and present.

One of the most enduring lies and fabrications propagated by Zionists and their friends' focuses on the forceful expulsion of 750,000 Palestinians in 1948 and the wholesale destruction of villages and towns on the coast.

The Israelis and their apologists continue to peddle the big lie that the Arab leaders called upon the Palestinians to leave to facilitate the Arab armies' plans to "throw the Jews into the sea." Indeed, the rhetoric further blames the victim and assigns the responsibility for the expulsion to Arab leaders, while casting the colonizing Zionists as victims of a massive anti-Semitic plan: an Arab extermination campaign about to take place just 3 years after the Holocaust. What really happened in 1948 and who is responsible for uprooting the Palestinians and destruction of cities, villages and lives alike?

Existing research on the 1947-48 expulsion and the Nekba points to an intentional, deliberate and well-planned systematic strategy. The plan was to empty Palestine of its indigenous population in order to bring about a decisive Jewish majority state. This goal is at the heart of Zionist's imagination and current policies directed at Palestinians, with one settlement building and one Palestinian family eviction at a time.

As early as 1961, Palestinian historian Walid Khalidi, in his essay "Plan Dalet: Master Plan for the Conquest of Palestine" provided early records of the plan to forcefully expel the population. In this regard, Palestinian historians including Khalidi, Ibrahim Abu-Lughod, Edward Said, and Nur Masalha to name a few, have written about this deliberate expulsion and assigned responsibility to the Israeli leadership at the highest levels and called for the implementation of Palestinians right of return according to UN resolution 194. Khalidi's trail-blazing research and writing on this subject did not get the appropriate attention at the time, and few outside a small circle of Palestine specialists took the evidence seriously since it was based on Palestinian accounts.

It took over 30 years for Israeli historians to begin unraveling the fabricated official Israeli state narrative concerning the Nekba. A group of new Israeli historians like Benny Morris, Simha Flapan, Tom Segev, Avi Schlaim, Benjamin Beit-Hallahmi and Ilan Pappe, utilized the opened Israeli archival materials and collectively worked to shed light on army operations directed at expelling the Palestinians and other significant events from the 1947-49 period.

For sure the idea of emptying Palestine of its population through a transfer plan has been present and articulated by every major Zionist leader starting with Herzl's idea, "to spirit the penniless Arab population across the borders," up to the present cast of characters populating the Israeli government. Prime Minister Bibi Netanyahu, who stated in 1989 while serving then as Deputy Foreign Minister, "Israel should have taken advantage of the suppression of the demonstrations in China [Tiananmen Square], when the world's attention was focused on what was happening in that country, to carry out mass expulsions among the Arabs of the territories.

However, to my regret, they did not support that policy that I proposed, and which I still propose should be implemented." Transfer, a sophisticated term deployed to mask or act as a euphemism for an ethnic cleansing campaign, is a foundational ideological corner stone in Zionist and successive Israeli government plans, which existed even prior to the inception of the state.

More critically, the idea of transfer was discussed by Ben-Gurion in a speech made at the 20th Zionist Congress held in Zurich on the 7th of August 1937 stating: "Now the transfer will have to be carried out on a different scale altogether...

Benny Morris maintains that "during the last decade of the Mandate the idea [of transfer of the Palestinians] became increasingly attractive and realistic" for the Zionist. Morris further asserts that the Zionist army went into the war of 1948 "without a master plan for the expulsion of the Palestinians; rather it "took place naturally as the two sides battled each other."

In his book, "1948 and After: Israel and the Palestinians," Morris provides evidence accounting for 73% of all Palestinian flight being directly caused by Haganah/IDF military operations carried out, while another 22% of the Palestinians fled the area out of fear and "a crisis of confidence" emerging from the deteriorating circumstances at local levels. Morris' work is important in concluding that the military intelligence report "undermines the traditional official Israeli 'explanation' of a mass flight ordered or 'invited' by the Arab leadership."

Ilan Pappe, in "The Making of the Arab- Israeli Conflict, 1947-1951," maintains that "Plan D can be regarded in many respects as a master plan for expulsion.

The plan was not conceived out of the blue - expulsion was considered as one of many means for retaliation against Arab attacks on Jewish convoys and settlements; nevertheless, it was also regarded as one of the best means of ensuring the domination of the Jews in the areas captured by the Israeli army." In this context, Pappe's conclusion directly challenges Morris' view that the expulsion was "born of war, not by design, Jewish or Arab."

Indeed, Morris' own writing contradicts his conclusions when quoting from the diaries of Yosef Weitz, the director of the Jewish National Fund's Land Department: "it must be clear that there is no room in the country for both people ... the only solution is a Land of Israel, at least a western Land of Israel without Arabs... There is no way but to transfer the Arabs from here to the neighboring countries. ...Not one village must be left, not one tribe." By bringing Weitz's diary forth Morris is not striving for the correct conclusion but is actually working the 'bad-apple theory' to explain away, or dismiss altogether, the centrality of Plan Dalet in the expulsion. In a subsequent work, "The Ethnic Cleansing of Palestine,"

Ilan Pappe was more emphatic and direct on the subject, with the title of the book serving as a definitive word on the topic and concluding that the "the aim of the [Dalet] plan was in fact the destruction of both the rural and urban areas of Palestine." At present only die-hard Zionists still hold onto the propaganda that the Palestinians left on their own and the Israeli leadership were not responsible for it.

Building a State One Massacre at a time!

The late William Zukerman, editor of the Jewish Newsletter, maintained that the "flight of the Palestine Arabs, which created the Arab refugee problem, was not a spontaneous act - it was a coldly calculated plan executed by the Irgun with the knowledge of the Haganah and the Jewish Agency of the time." Zukerman's view could be further contextualized by Menachem Begin's own words, "The Revolt," maintaining that the "Arabs throughout the country induced to believe wild tales of Irgun butchery, were sized with limitless panic and started to flee for their lives." The induced panic strategically done and the "mass flight" according to Begin "soon developed into a maddened, uncontrollable stampede." Begin goes further on to say that "the political and economic significance of this development can hardly be overestimated."

What is missing from the above is Begin's own role in bringing about the mass flight of the Palestinians through the utilization of massacres and none as important as the one committed on April 9th, 1948 in Deir Yasin village resulting in a reported 254 civilians murdered at the time. Begin defended his participation stating "the massacre was not only justified, but there would not have been a state of Israel without the victory at Deir Yasin." Arthur Koestler wrote sometime later that the "bloodbath" carried out by the Zionists at Deir Yassin was "the psychologically decisive factor in the spectacular exodus of the Arabs from the Holy Land and the creation of the Palestinian refugee problem." According to Mordechai Nisan of the Truman Research Center of the Hebrew University in Jerusalem, "without terror it is unlikely that Jewish independence would have been achieved when it was."

The Deir Yasin massacre is well-known, but Israeli historian Ariyeh Yizhaki documented that "at least 20 large massacres of Arabs took place during the War of Independence (defined as over 50 murdered in each massacre) and about 100 small massacres (defined as individuals of small groups)." In Yizhaki's view, these massacres "had a profound effect on the fleeing of the Arabs from the country."

Furthermore, Yizhaki points out that "for many Israelis it was easy to cling to the safe claim that the Arabs left the country because that was what their leaders' ordered. That is a total lie. The fundamental cause for the flight of the Arabs was their fear of Israeli violence and that fear had a basis in reality."

In reading through the archives, Ariyeh Yizhaki concluded that "from almost every report which appears in the army's (Israeli army) archives about the occupation of Arab villages during May-July 1948, the height of confrontations with the Arab villagers, there comes a smell of a massacre."

Another historian, Uri Milstein, named 'dispeller of myths' in Israel, agrees completely with Ariyeh Yizhaki and even goes further to say that "if Yizhaki claims that there were murders in every village, then I say that up to the inception of Israel, every event of fighting ended in a massacre of Arabs." Milstein goes on to say that "there were massacres of Arabs in all of Israel's wars, but I have no doubt that the War of Independence was the dirtiest."

In remembering the Nekba, we affirm Palestinian rights, the justness of claims accrued from planned acts of ethnic cleansing and wholesale civilized thievery that made it possible to build the Israeli state. The right of return is the first act toward making the Palestinians whole once again, restoring their collective bodies to their land. The issue is not one of empty slogans of peace, but it has to be rooted in an approach of restorative justice that can give birth to a peaceful existence. The time for the Right of Return is today and justice is on the horizon.