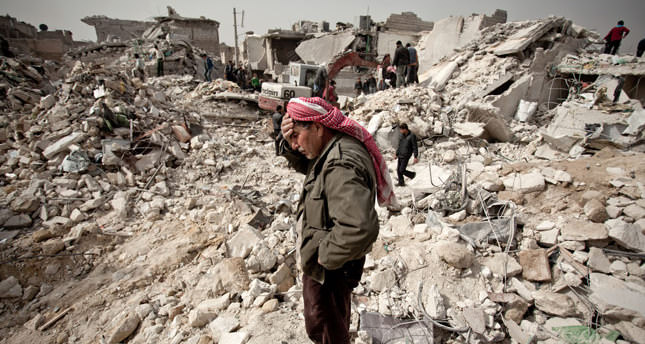 by Ufuk Ulutaş Jun 21, 2014 12:00 am
When a group of schoolboys scrawled anti-regime graffiti on a wall over three years ago in Deraa, they did not know that they would unleash a war on a regional, even a global, scale. But since March 2011, a bloody regional war with global extensions has been ongoing, and observers can barely see any light at the end of the tunnel. Based on very conservative estimates, more than 100,000 Syrians have been killed to date, while probably more have been arrested, and millions of Syrians have been forced to either relocate within Syria or to leave Syria as refugees.

Consequently, we are left with a dictatorial regime with partial legitimacy and sovereignty over the Syrian land and people, a divided opposition that is difficult to patch up, and amorphous armed groups, such as the People's Protection Units (YPG) and the Islamic State of Iraq and al-Sham (ISIS), which belong neither to the opposition ranks nor to the regime. As for the international scene, two groups stand out: Friends of the Syrian People (FoSP) and friends of the Syrian regime. The former has chosen to work under an institutional framework, while the latter has not deemed an announced structure to be necessary. Ironically, the former lacked uniformity and failed to deliver, while the latter operated harmoniously and incessantly provided the regime with aid both financially and politically.

The regime is defiant, while the opposition reciprocates with defiance. The practical implication of this shared defiance is the prolongation of the conflict that has been deepening Syria's destruction daily. In the background to Syria's daily destruction and increasing death toll, a critical question remains unanswered: What do the FoSP want for Syria? All the data indicates that the FoSP have not been able to unite on basics regarding Syria, and therefore lack a plan that either alleviates or preferably ends the suffering of the Syrian people.

This inaction unfortunately makes the FoSP part of the problem rather than part of the solution. The current stalemate emanates from one simple conviction – that is, both sides of the conflict believe that they can still win this war of attrition. As a matter of fact, they really can. Despite its superior arms inventory and continuously reinforced foreign supplies, the Assad regime has failed to eliminate the opposition. On the other hand, despite its fragmented structure and logistical inadequacies, the opposition still fights back and can keep doing so for longer.

The FoSP's inaction serves to preserve the current balance that sadly ensures further destruction in Syria. While a political solution seems unlikely due to the current balance on the ground, to be a part of the solution, the FoSP has to step in to change the balance. To do that, military calculations on the ground have to be altered. Because military intervention is off the table, it is on the Syrian opposition to pull themselves up by their bootstraps, and they are in dire need of advanced weaponry to do that. It is known that some members of the FoSP are willing to deliver certain arms to the opposition. For the opposition to tackle Assad's superior air capabilities, the FoSP should initiate a process that permits delivery of advanced weapons for air defense and initiates an intensive training program for opposition fighters. Realistically, without those weapons in the opposition's hands, the war in Syria will continue for a long time with the Assad regime maintaining the upper hand and its superior killing capabilities.

Any suggestion regarding weapons delivery to the opposition is followed by the million-dollar question: Which opposition? The FoSP has unfortunately been so preoccupied with cherry picking the "moderate" opposition that they unwittingly created a ground for extremist groups to recruit relatively easily from the moderate groups. If by "moderate," the FoSP mean armed groups manned with Syrians fighting for the fall of the Assad regime, aiming to create a civil and multicultural Syria, and having no organic relations with extremist groups, i.e. al-Qaeda, then there are more groups that fulfill the requirements in Syria than they may think. The list of groups to be supported should not only include groups such as the Syrian Revolutionary Front and the Hazm Movement, but also the largest rebel alliance, the Islamic Front, which has recently been exerting efforts to coalesce into the mainstream. In other words, the FoSP should engage the Islamic Front and encourage a restructured opposition rather than inducing further divisions and rivalry among opposition groups.

A political solution in Syria will only come about once either side stops believing that it can win this war. In other words, any political solution will need to be preceded by a military victory for either side. Therefore, the FoSP has two options: Either it will preserve its current position, watching further destruction of Syria and putting up with the war's political, humanitarian and financial consequences, or take a firm stance behind the opposition and "talk less and do more." If the FoSP wants a political solution in Syria, then it is time to strengthen the opposition militarily. This will not only help persuade the Assad regime to make necessary compromises at the negotiating table, but it will also weaken the extremist groups by eliminating the conditions under which they operate and recruit.

*Director of Foreign Policy Studies at the SETA Foundation, Ankara