Myanmar has become an obscenity within Asean 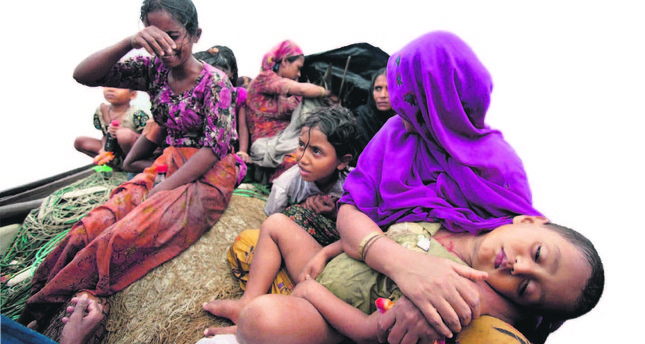 by Shakir Husain Jun 21, 2014 12:00 am
Myanmar has become an obscenity within the 10-member Association of Southeast Asian Nations (Asean) because of a campaign of genocide by Buddhist fanatics against Rohingya Muslims.

Most members of Asean strive to achieve greater prosperity, social peace and a EU-style regional integration, but Myanmar is hampering the bloc's objectives by exporting its misery, poverty and ethnic hatred.

It seems the men in control of Myanmar actually wallow in their conflicts. After the junta's wars with the Karen, Shan and Kachin people subsided a new wave of violence erupted against the Rohingya minority.

There are endless reports of Rohingyas being forced to leave on perilous journeys to Thailand, Malaysia and other countries. They are brutally targeted by Buddhist mobs operating with state connivance.

The violence goes on even as Myanmar hopes for greater international engagement, helped by its membership in the economically advanced Asean.

The regime wants the world to believe that Myanmar is no longer the appalling place it was during the 1962-2011 dictatorship and that it has evolved into a civilian democratic system.

Some Western nations have bought into the promised reforms despite hard evidence that the old totalitarianism is alive and kicking.
The military has institutionalized its role in running the country. The 2008 constitution gives it a quarter of the seats in parliament and serving generals must be given the ministries of interior, defense and border affairs.

For those who cannot understand how merciless the junta can be must consider the way it ignored the victims of the Cyclone Nargis that killed more than 130,000 people in 2008.

When Barack Obama visited Myanmar in November 2012 and hosted President Thein Sein, a former general, in Washington in May 2013 it meant the US had embraced a nation it once considered pariah.

China, Japan and India are similarly eager to expand their influence in the strategically vital country and cannot be bothered to reflect on the Rohingya plight.

Britain and key EU members have applauded Myanmar's false reforms in their eagerness to acquire natural resources and market access. The densely-forested nation of 60 million sits on huge amounts of untapped reserves of oil, gas, minerals and gems.

We know how some self-styled champions of human rights supported apartheid in South Africa and condone Israel's racist occupation of Palestine, so their double standards in Myanmar are not surprising.

The Rohingya people are being denied their citizenship rights and have lost their homes and livelihoods. Children and women are particularly subjected to horrific abuse. Arson, murder, rape, forced labour, concentration camps and denial of medical treatment to victims of violence are common. The campaign is orchestrated by the so-called "969" movement led by extremist Buddhist monks.

The West's Nobel laureate darling Aung San Suu Kyi, leader of the National League for Democracy, prefers silence in the face of this horrific violence.

Therefore, Asean must take steps to contain the bloodshed in Myanmar before it is too late. Thailand is already affected by the problem as desperate Rohingyas seek refuge there and often end up in the hands of well-organized human trafficking gangs.

Set up in 1967, Asean represents 600 million people and $2 trillion (TL 4 trillion) in GDP. The group has a policy of non-interference in each other's internal affairs and this stance is being exploited by Myanmar, one of the poorest members.

The bloc aims to achieve a single market, the Asean Economic Community (AEC), in 2015 to promote freer movement of goods, services, capital and skilled labour.

It looks unlikely that there will a full economic integration by the target date, but such projects are made even more troublesome by conflict-ridden countries like Myanmar.

In view of the dire humanitarian situation and for the sake of its own values Asean must put pressure on the Myanmarese government to halt its atrocious attitude towards ethnic minorities.

Myanmar must not be able to enjoy the fruits of regional integration while a genocide is being carried out against a key population group.
With Myanmar holding the rotating Asean chairmanship this year, the occasion should be used to make its rulers understand that they must respect the well-established human rights standards.

* Indian journalist. He spent 14 years in the UAE, working for Yahoo, Gulf News and The Gulf Today