The good old days are over: cracking of the BRIC bloc 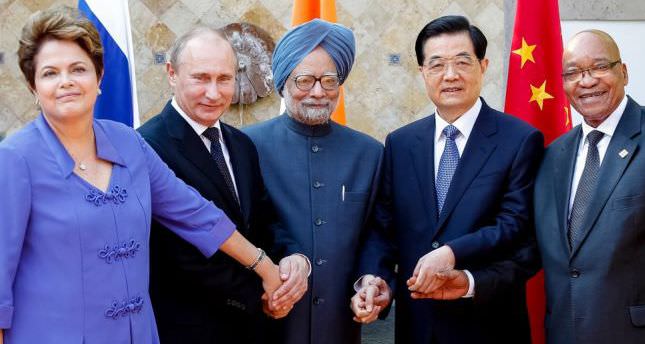 by Hatice Karahan Jun 25, 2014 12:00 am
The famed BRIC bloc, introduced in the early 2000s by economist Jim O'Neill, has been the apple of the eye of global economy for the last decade. When O'Neill first coined the acronym, the members of the bloc, namely Brazil, Russia, India and China had promising economic indicators. At the time, they were emerging – so to speak – as the rising stars of the developing world. It isn't hard to understand why O'Neill and so many others were excited.

Now, after a decade of challenging tests, the performance of the bloc is being widely questioned. Has the BRIC hypothesis proved to be true?

Well, up until the financial crisis in the years of 2008 and 2009, the picture was quite rosy. In this respect, there is no doubt that the new kids of the bloc exhibited fascinating development during the pre-crisis period, with higher than average GDP growth rates that even reached double-digit numbers. Correspondingly, their welfare levels improved as well. Brazil and Russia, which had started the millennium as low-middle income countries stepped up to high-middle and high income groups, respectively. On the other hand, China and India had been in the low income category before moving up. While China managed to become a high-middle income country, India worked its way up to the low-middle income status. In terms of GDP, the countries of the bloc have continued to be important economic actors, ranked within the world's top 10.

Despite this impressive outlook, however, the performance of the group has taken a new course over the last few years, and not a good one.
After the financial crisis, Brazil's economic performance fluctuated while Russia failed to catch up to global economic growth rates. In the post-crisis period, only India and China have achieved higher than average and relatively stable GDP growth, but with a noticeable deceleration. Therefore, when the pre- and post-crisis periods are compared, it is observed that the attractiveness of the BRIC group as a whole has unquestionably eroded.

Furthermore, the present situation and projections are not encouraging. China plans to decelerate gradually in the following years, by shifting its growth dynamics away from investment and exports towards consumption with the purpose of enhancing its welfare level. Besides, the aging population of China due to the long-lasting one-child policy of the government will undoubtedly start to ruin the favorable demographics of the national workforce in the near future. In this sense, the giant economy is expected to cut down its growth rate to 6 percent within five years.

Based on the forecasts, this inclination will last for the next decades and the Chinese economy will likely grow within the 3-4 percent interval by the 2040s.

Russia is another aging country in the group. The Russian population has already started to deteriorate in terms of children and the number in the 15-64 group will soon decrease as well. So the population of Russia will not only get old but also go drop, quickly. Besides, Russia has been posting poor GDP growth rates of around 1 percent of late. Taking into account the recent geopolitical chaos the country has triggered, hopes for Russian economy are fading.

News coming from Brazil has not been heartwarming, either. The speed of growth has declined to just over one percent, mostly due to the weakened domestic demand that has been shaken by the fear of China's own slowdown, with the Asian country being Brazil's main trade partner. One glimmer of hope for Brazil is its oil reserves. Still, projections imply low levels of acceleration for the Brazilian economy even if they can successful sell on their oil.

The only member of the group that will keep its dynamism alive is India. The economy, which has been growing in the band of 5 percent, is not expected to stall in the decades to come. The Indian population is projected to grow considerably and stay young until the 2050s unlike China.

However, the prevailing problems of poverty, education and infrastructure indicate that the country has a long way to go, with serious challenges ahead.

Thus, when all the indicators belonging to the member nations come together, it is crystal clear that the good old days for the group are over. What I see is that the cracking bricks of BRIC no longer build up a strong bloc.

*Dr., teaches at the Department of Economics at Istanbul Bilgi University and is an economist at SETA Ankara