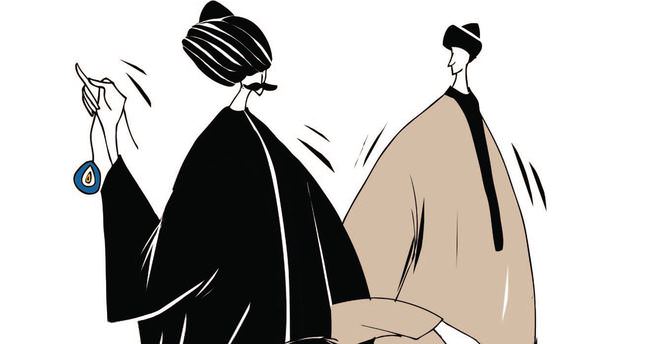 The centuries-old Turkish-Iranian relations have been built up through competition, antagonism and -- to some extent -- friendship, up until the new millennium. First and foremost, Iran and Turan - the countries of Iraj and Tur, the sons of mythical Persian king Fareidun - represent the two competing sides of the legendary narrative of "Shahnameh" or the "Book of Kings," the very long national epic poem of Ferdowsi. The earliest historical reality during the sixth and seventh centuries also confirms the vying nature of Turco-Persian relations at a time when the Sassanids and Göktürks attempted to dominate the pasture life of the steppes together with the silk and spice roads in the medieval Near East and Inner Asia.
Following the Seljuk conquest of Iran, the Turks seemed to have settled a peaceful environment in the Persian Plateau, but later on, the Crusades from the West and the Mongolian invasion from the East destroyed the relative peace and stability between the two peoples living side by side from Transoxiana (Mawarannahr) to Iran, Iraq and Anatolia.

However, the most ideological rupture among the parties emerged in the early 16th century when Shiism became the state's official faith during Safavid Iran. Since then, Ottoman-Iranian relations can be described as having been long dominated by the religious-sectarian rivalry. The Sunni-Shiite split therefore caused some rifts that have not yet been mended and constitute the background of distrust in mutual relations.

Therewithal, Turks and Iranians were necessarily forced to have approximated their policies against their "common enemies," namely Britain and Russia, whose expansionist political-military pressures over both weakened their imperial states throughout the long 19th century. The 20th century, on the other hand, has brought some other burdens that have complicated contemporary relations between Turkey and Iran. First, the pan-Turkist vision of the Young Turks over Iranian Azerbaijan and Turkic peoples living in Iran on the eve of World War I institutionalized Iran's paranoia and/or skepticism about a prospective Turkish irredentism toward its territorial unity. Secondly, the Iranian Revolution at the end of the century raised some concerns in laicist-secularist Turkey regarding Iran's political Islam (Shiism) and caused the securitization of Iranian affairs through the discourse of obscurantism by Turkey's military, political and cultural elite. Additionally, the Kurdish question and Iran's underhanded support for the terrorist the PKK during the 1980s and 1990s also strained relations between the parties.

In the shadow of long-lasting relations between the two sides, those questions naturally come to mind, especially after the official visit of newly elected Iranian President Hassan Rouhani to Turkey on June 9. What can all the aforementioned historicity above tell us about the prospective level of Turkish-Iranian relations while the ongoing crises in both Syria and Iraq have already constrained mutual relations? And can it really be a turning point, as the Iranian president stated during his visit, in mutual relations?

Turkey and Iran, despite Western pressure on both, had improved relations before the civil war in Syria erupted. As remembered, Turkey - and Brazil - took the initiative in the Iranian nuclear issue in order to dissipate the Western blockage over the Iranian regime. This era was even called a neodétente in bilateral relations since the interwar years when Atatürk and Reza Shah Pahlavi approached their paths to Westernization and/or modernization.

Such a convergence later on had even been transformed into security cooperation within the scope of the Saadabad Pact and the Central Eastern Treaty Organization (CENTO).

But today, Turkey and Iran seem far away from security cooperation in the wake of the current Syrian and Iraqi conflicts -- sectarian clashes -- that are ongoing once more nowadays.

Therefore, one might easily understand that both civil wars in Syria and Iraq would serve as a litmus test from now on in bilateral relations. In other words, there are seemingly two scenarios for the prospective trends in Turkish-Iranian relations. First, Turkey and Iran would either cope with the ongoing conflicts together before a new wave of Sunni-Shia dispute totally destroys delicate balances and sociocultural harmony in the Middle East.
Or secondly, both countries would continue until their re-asserted geopolitics during the post-9/11 era have been preponderated over one another in the region. Obviously speaking then, the first scenario may lead us to the officially desired cooperation between the countries.

In this situation, Turkey and Iran can easily develop a robust commercial partnership in which transaction costs can rapidly go beyond $30 billion, as both presidents, Gül and Rouhani, stated in their press conference as a target of economic relations. Flourishing economic relations on the one hand can also help in political collaboration in which both countries utilize a winwin strategic outlook. Moreover, a possible Turkish-Iranian rapprochement could presumably facilitate the solving of some critical issues, stemming from the Kurdish problem and energy transportation to the Southern Corridor to the Middle East peace process and regional stability in the Caucasus, Iraq and the Levant.

Unfortunately, the latest developments since the ISIS advance in and around Mosul could lead to confrontation between Turkey and Iran unless the agesold sectarianism can be stopped before it divides Iraq into three zones of influence. If this happens, which is de facto happening now, then the second scenario is unavoidably about to come to the fore that would lead us to a path-dependent context in Turkish-Iranian relations in which "perpetual wars" are perceived as the most decisive way of obtaining "perpetual peace" within a realist perspective. But, such a scenario would always produce zero sum games in terms of regional realpolitik and trigger more chaos and anarchy inside the Islamic realm.

In these circumstances, Turkish and Iranian policymakers have no option except cooperation and reconciliation with regard to the key issues that destabilize the political landscape of the Middle East. The Turkish side seems ready for such cooperation and reconciliation on some conditions that necessitate Iran's avoidance of hardcore Shia discourse regarding the socio-political discontents against both the Syrian and Iraqi governments.

Ankara regards the al-Assad regime as illegitimate and overdue anymore and supports a peace resolution in which there is no place for Bashar al-Assad in the future of Syrian polity. That is to say, the Iranian leadership should also pull back its vital support from Bashar and try to agree on a mutual compromise political figure in Syria. Apparently, only Turkey and Iran together can terminate the bloodshed in Syria.

As a matter of fact, Iran and the Nouri al-Maliki coalition government that it backs are also responsible for the current chaotic atmosphere of Iraq as much as the ISIS terror and the U.S. political-military failure.

Needless to say, Iran has too much attempt to enforce its Shia geopolitics through the al-Maliki circle into Iraq so far, and thus the fault lines between Sunnis and Shiites in the country were gradually broken, particularly after the U.S. military withdrawal from the country as of December 2011.

Recently, the grandest Shia cleric of Iraq, Ali Hussaini Sistani, issued a fatwa for the Shiites that authorizes them to fight with the ISIL militants in order to defend the country. President Rouhani also vows to protect the Shiites of Iraq, too. Yet, this would not be a solution to the commotion in Iraq; rather, it would increasingly provoke the Wahabi/Salafi-jihadism sponsored by the Saudi and Gulf regimes, which are known as Iran's sworn enemies in the region. Hence, Iranian attitudes toward Iraq further jeopardize its regional security. Therefore, Iran needs to balance its power through Turkey either against Wahabi-Salafi radicalism or against the American-Israeli axis. Russia on the other hand cannot be an alternative to Turkey since its sphere of influence is limited in the Middle East.

Turkey seems the only Muslim country that can mediate between Arabs, Iranians and Kurds before Sunni and Shia extremists completely sweep away the state mechanisms and political-economic order not only in Syria and Iraq, but also all across the Islamic world.

In brief, old relations have rendered both Iran and Turkey as the regional actors whose geopolitics essentially determine Middle East politics together with Arabs and Kurds. Turkish foreign policymakers, foremost Prime Minister Recep Tayyip Erdoğan and Foreign Minister Ahmet Davutoğlu, meticulously avoid labeling the current Middle East conflict as a Sunni-Shia struggle, whereas the Iranian-leadership tends to describe it as a Sunni rebellion both in Syria and Iraq.

Nonetheless, the Middle East and the Islamic world in general today needs a Turkish-Iranian alliance and reconciliation even more than during the time of Atatürk and the Shah. Simply put, the reality is that both parties ought to abandon the language of sectarianism and classical realism; instead, Iran and Turkey must cooperate and compromise on the critical-structural problems created by the Sykes-Picot settlements, which requires a neo-realist approach and mutual understanding. If this is materialized, we can expect once again the good old days in the region; otherwise, the endless combative mentality of the days of yore would rule over Turkish-Iranian relations in the 21st century, too.